What do I have?

I started this conversation on a earlier post, but have found more information that I would enjoy being trained on.

The bike cost here in the states would be $3500.00. My question is would it be worth it or am I just buying a mishmash that is not totally worth the restoration cost. The bike is very complete minus clutch. Also it hasn't been touched since the pilgrims brought it over.

Again I would like any info on what kind of bits it is and if it would be worth this restoration cost.

Thank you for all help

Hi Dave,  Norton singles are not my thing ,but I do have a mid 1930's sporting ohv single.  What you have looks pretty much all Norton . Where you are they are rare. Don't think you have done badly. Some military history?. A bit of advice, don't throw anything away. Restore enough to ride ASAP,   time waits for no man.

Good bike with patina. Just use it as it is.

You do not make money from…

You do not make money from this hobby, only a few builders with 'Names' can. So you either like the bike enough to buy it or not. An oily rag restoration would be best, ride and enjoy, fix what goes wrong as you go, after replacing the obvious such as tyres etc. Full restoration will be costly as its much the same cost wise for a small or large bike.

I would leave it as is as far as finish goes but go through it to make sure it is mechanically sound. Originally finish may make it more valuable while at the same time you will be spending less on restoration- a LOT less.

As others have pointed out you rarely make money in this hobby - I am upside down financially on all my bikes .

Bitsa This and Bitsa That !

The good news is that the cylinder and frame appear to belong to each other...An ES2 despatched March 1936 to Laytons of Oxford together with three others and 18 Model 18s marked 'Tattoo'..My suspicion is that they were for a military display team for a tattoo such as Tidworth or Aldershot. These were huge prestigious events during the late 1930s, with special trains laid on from London.

CJO is an Oxford registration series issued April 1936 so that fits too. Does this ES2 have a CJO number ? It's close whatever ! 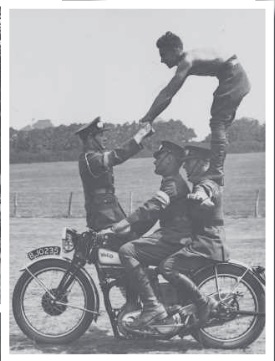 The crankcases are 1944 WD16H...B189 was a Base Workshop code, MS is Ministry of Supply and 7/45 is the date the unit was overhauled. The WD16H used the 1936 pattern cases so if the work has been competently done, it should be satisfactory.

Any cradle frame pre-war Norton is worth double the figure that you're mentioning in the UK or Europe. I'd bite the seller's hand off, but there is a lot of work there to do it properly and it looks well worn out....If it was a display team bike then check the frame carefully for cracks !

the bacon slicer is CJ0159, could you please explain the statement about "tattoo". I being in the ststes have not heard this term before. I am still learning. My wife and I have been to the U.K. a couple of times and purchased bits for our 59 frogeye and my 67 velo le. Thank you all very much for all the replies!!! It is nice to get honest comments instead of stupid and relies with no knowledge. That is why I am happy about being on this site and a member of this club even though I cannot make any events.

I believe that as with so many British military terms, the word was adapted from a European neighbour.  'Tap-toe' was a Dutch military command and by the 20th Century in the UK, it had come to mean a large open-air military show with marching bands, displays of gunnery, horsemanship and by the 1930s, motorcycle riding.

Most of the area Commands held one with a recruiting function. There were substantial budgets and the motorcycle display teams seem to have been responsible for choosing and purchasing the machines locally.

By the way, your rear mudguard stays are from a 1940 military Norton. They have the extra cross brace and  brackets for the steel pannier tool boxes. Your existing toolbox is, I think Triumph or Ariel.

Do you know how it came to be in the US ? . It's no longer on the UK licensing computer. Does it have a paper 'tax disc' in the holder ?

A tattoo is a military…

A tattoo is a military display to the public showing off their capabilities which includes despatch rider skills.

The most famous being the Edinburgh Tattoo

Sorry no other information…

Sorry no other information on the bike. I have a small book I purchased at the national museum in the U.K. with all reg codes and that said CJO was from Hereford. That is the only info I have. I saw tool box was strange.

So would this be a ES2 or a 16H? Or a bit of each. The way it sounds this was a prewar military modified bike?

It sure would be easier if I was closer!!!! LOL

I am sorry about taking so much of your time, but I am learning so much. Also I would like to know what model I would need to order parts for if I purchase the bike.

Again I thank everyone for the history and detail learning I an receving. Soo,, much knowledge in this group, it is just amazing. I look at the forum just to learn about other models.

Can you be sure the crank…

Can you be sure the crank cases are 16H?  'W' surely means 'War Department' not '16H'.  It seems a lot of effort to modify an SV crank case.  The army did buy other models, didn't they?  Especially in peace time when soldiers were having a lot more fun!  The E M Franks books says the crank cases started off with the same casting but are differently machined and "by the substitution of large unions to accommodate the push-rod cover-tubes, the S.V.crankcase becomes suitable for the O.H.V. engine.  This necessitates special machining and it is not intended to suggest that a conversion from one type to the other is a simple proposition".  Would the military (or anyone else) do it?  The frame is an ES2 cradle frame, and it is 79x100 (500cc) and overhead valves.  So it's an ES2 pure and simple, surely?

Anyway, as far as getting on the road is concerned - it has a standard doll's head gearbox and not an earlier Sturmey Archer, so finding a clutch should be a bit easier.

Again what a vast amount of…

Again what a vast amount of knowledge in this group.thank you very much for all the information. Now if I can come to a agreement with the seller. One other party intetested.

"W" is the prefix used for the WD16H frame and engine numbers once Norton began to stamp matching numbers in October 1939. Prior to that, the WD16H simply had numbers from the existing series. Initially slightly random, but then in blocks that had been reserved. The Sidecar wheel drive Big 4 components had an 'S' prefix, presumably for 'Sidecar'.

That these cases have been stamped with a post-war rebuild reference number and were then put in stock suggests to me that the the modification took place in a later, civilian life. If the engineer copied the machining on the existing cases then it is effectively a 1936 ES2...presumably, cams etc. were simply swapped over.

Wow a walking text book. Again, thank you and others for your information. I guess the only thing left is hopefully for me to be able to purchase the bike.

Go for it :-)  The worst thing that can happen is you  decide that you don't like the numbers and look for a '36 / '37 crankcase....in the meantime, you have the riding experience of a late 30's ES2. As has been mentioned, it has the 'Doll's Head' gearbox. It will accept any Norton clutch up until the Commando and Andover Norton sell them complete and new...You may have to dress the backplate slightly as the last versions were slightly deeper but it doesn't really even  count as engineering work, simply fettling.

Thank you. The present owner…

Thank you. The present owner is giving another fellow first crack at it since he was contacted first

I made I will pay his price today but it is a gentleman's agreement for first refusal.Owner does not want to under cut other fellow and I can understand that. I will let you know outcome in Monday.

Nice to know you are dealing…

Nice to know you are dealing with an honorable seller - seemingly a rarity these days . If it comes to a bidding war I think you can safely offer considerably more than $ 3,500 from a value standpoint - your budget is another matter.

Well I guess I will have…

Well I guess I will have more room in my shop this winter. I was just informed by the  Norton owner that the other fellow purchased it. He was told about it first and as much as I am disappointed I have to give the seller credit to be upright on the sale.

Thank everyone for their time replying  to my questions. I guess the search will continue. I would like to find something in a girder forked Norton in the future. Living here in the states they get quite pricey. Maybe a older restoration or a oily rag one will come up some time that would be affordable to shop over here.

At least I have my 54 Big 4 that I will spend more time on securing the LEFT hand watsonian Palma and sorting that out for a spring showing.

Again thank you to all who have put up with me.

Hi Dave - now that it seems…

Hi Dave - now that it seems a done deal - sorry you didn’t get it - May I ask if the the bike is here in the States or is it across the pond ?

Yes here in the states in…

Yes here in the states in the midwest. New owner is in his mid 30's and works in a bike shop that services all brands so he has knowledge, tools and many local contacts. It will be a good marriage for him and the bike. Sounds he is trying for the oily rag rebuild. He appreciates the orginal looks as opposed to totally restored.