Having just topped up my 19S at the local Esso station in North Warnborough, Hants., I noted the placard below relating to Esso Synergy Supreme + Unleaded 97octane.  It has been called this for some time but what has also now appeared is an E5 label on the pump replacing the previous BS7800, shown in the second photo.  This would indicate that the fuel might now contain 5% ethanol which is contrary to earlier claims that Esso Synergy Supreme was to remain ethanol free for the foreseeable future,  other than in the SW. 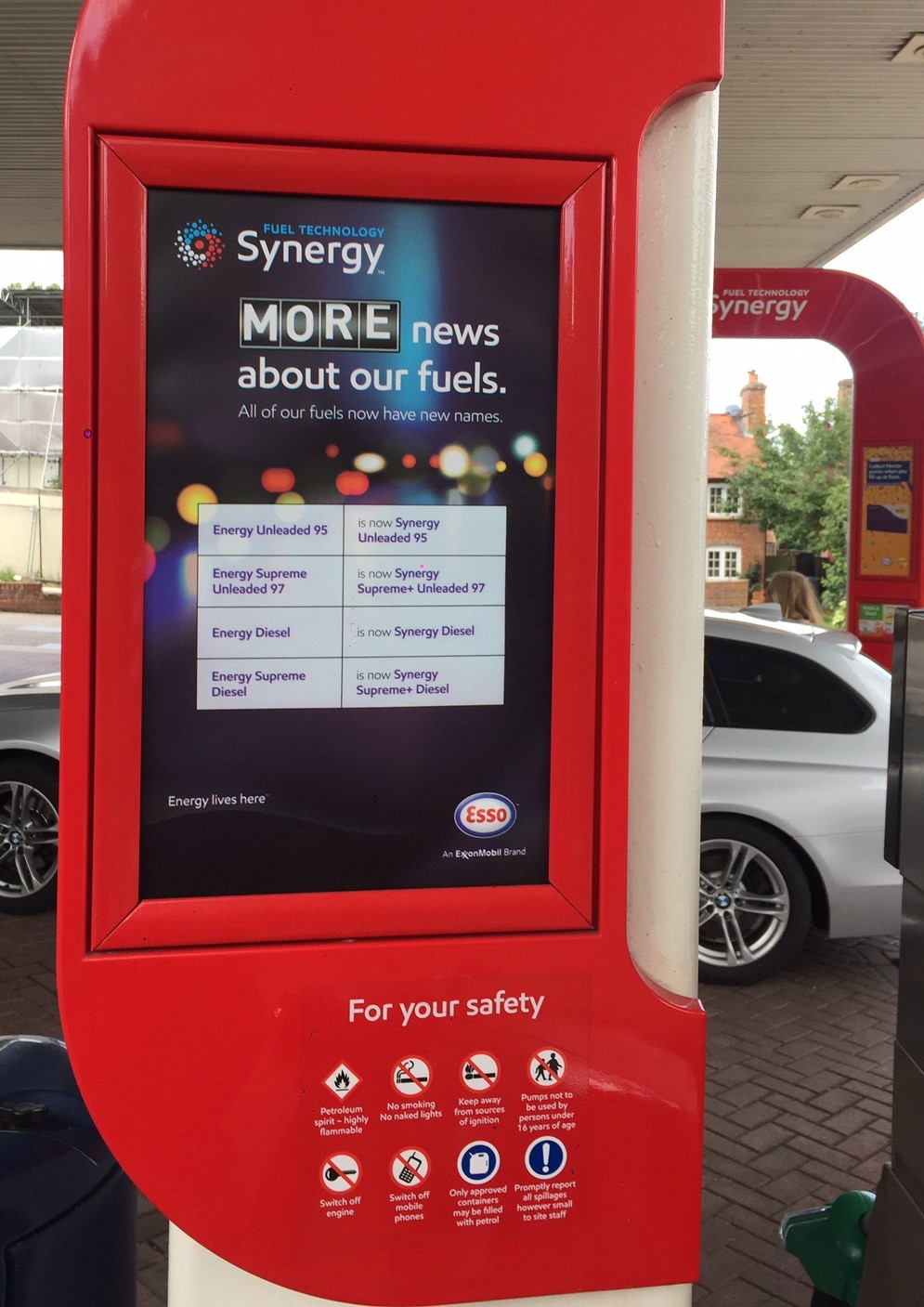 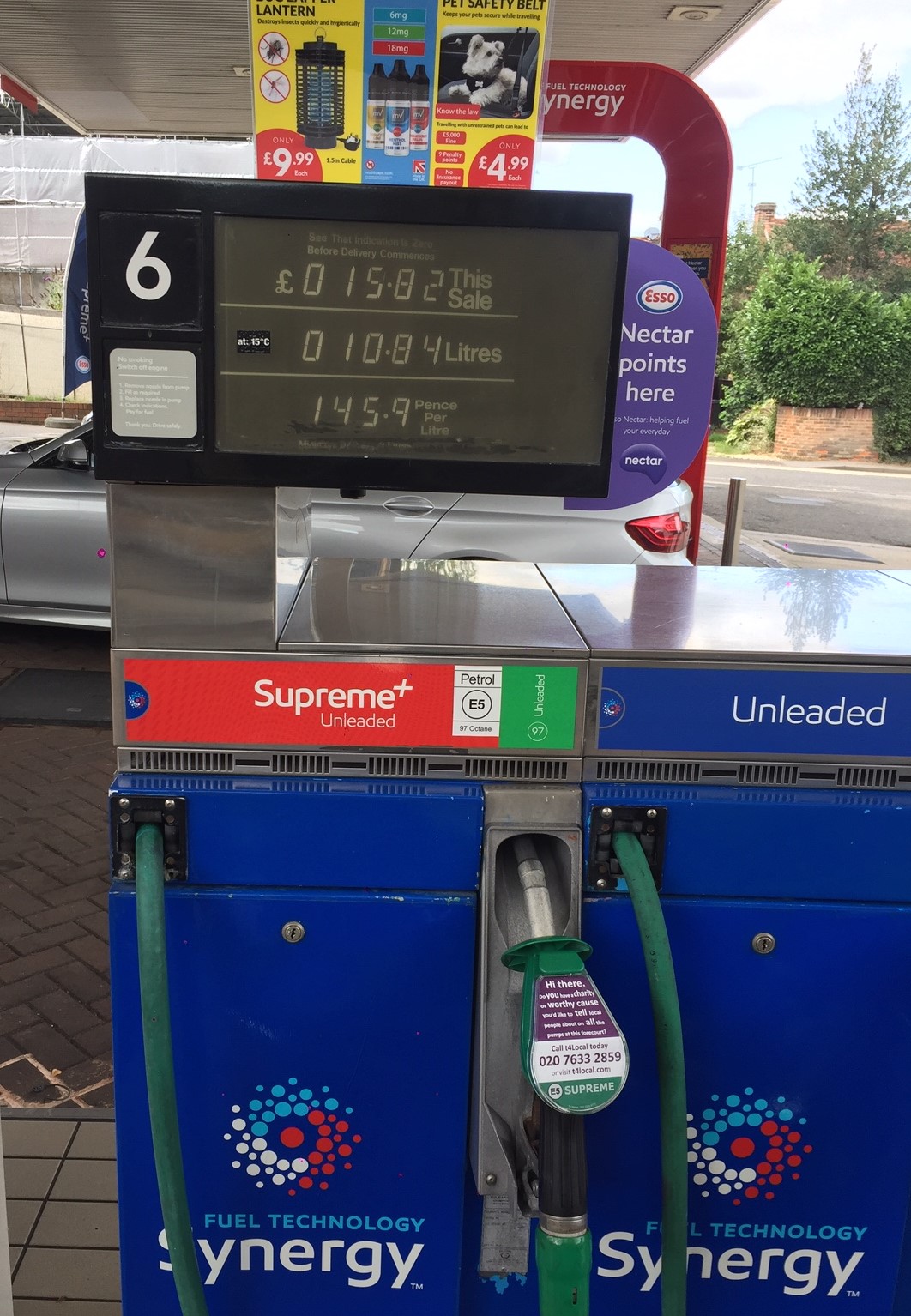 The E5 label probably refers to what is about to happen as my own test on the sample purchased showed it still to be ethanol free.

It most probably makes it quicker to re-roll tankers from regular to supreme etc. Some fuels cannot be transported in a tanker that has had ethanol fuel in it unless it has been cleaned, I would imagine regular and supreme are compatible and no cleaning is needed between loads.

I noticed this on the Shell…

Oh dear, that is not good…

Oh dear, that is not good. The reason for renaming Esso Synergy Supreme unleaded to Supreme + unleaded; is + ethanol, making out it is of benefit?

Those stickers appeared on the pumps at my local station weeks ago. I emailed Esso about them and they replied that they have no intention to put Ethanol in their Synergy Supreme in the areas where it was already ethanol free. Which is a relief.

I noticed my local Jet…

I am now retired, but spent most of my working life in the fuel storage and delivery industry, mainly for BP.

Hopefully I will try to clear up the mist, myths and presumptions around Ethanol and the new labels that we are ALL seeing !

The labels; well as I read it, this is in response to a Government directive to have consistent labels on fuel dispensers, that clearly identifies petrol and diesel. Petrol being “E” as it may contain Ethanol and diesel “B” as it can, well actually does, contain Bio fuel. The 5 and 7 is the percentage that the product MAY contain.  The labels appeared overnight, and that’s what changed, not really the fuel that is being dispensed! This incentive for clear and consistent labels may also help to stop the mis fuelling; where people put diesel in petrol vehicles and vice versa. But the public are involved here - so I am not holding out on this aspect!

Why do some fuels contain Ethanol, and others not? Just as the fuel companies point out, by law, regular unleaded must have 5% Ethanol, the super grades do not have to have it. Why is Scotland, Teeside and the West Country different? Well this is down to the system used to transport the fuels from the refineries to the storage depots (primary transport) and onwards to the end user (secondary transport)  - you!

The refineries in England and Wales use pipelines as primary transport, that is, where pipelines are available. Where there are no pipelines, then rail and/or sea primary is used. The trunk pipelines are multi user, in so much as all fuel grades travel down the same pipes, including Aviation Jet fuel. Because of the properties of water retention in Ethanol it is a requirement that no ethanol products will share a pipe with aviation fuels. (Aviation products are exceptionally well looked after, as the saying goes - there are no lay by’s in the sky!)  So both the unleaded grades traveling by pipeline leave the refinery without any Ethanol, this unwanted and nasty stuff is injected ( In a fully in a controlled environment) at the point of loading the road tanker (secondary transport).

There is no problem when switching road tankers from regular to super unleaded grades, Ethanol or no Ethanol. The residue left in an empty compartment is minute, and causes no problems to the next grade being loaded, typically 7500 litres per compartment. Road tankers swap grades all the time, including from diesel to petrol and vice versa, without any quality issues.

Scotland has no primary pipeline, except for a dedicated pipeline running from Grangemouth refinery to the west coast, (to enable the loading of ships bound for the west coast and N Ireland without the ships traveling miles around the north of Scotland). Aviation products are distributed by dedicated road tankers and rail car - these aviation carriers never carry petrol or diesel products. Likewise the road and rail transport ex Grangemouth that carry petrol and diesel to the garages never carry Aviation, so they can and do carry petrol that is blended with Ethanol, this blending is carried out at the refinery.

Scotland is a little more complex! The road tankers deliver direct from Grangemouth, down into parts of northern England, Cumbria, Tyne & Wear, Durham etc. So you have to be careful if you think Scotland, in the petrol sense, ends at the border - think again! Grangemouth refinery also have a rail fed distribution terminal near Carlisle. Road tankers from here range over the northern part of England with ethanol containing products.

Teeside has a storage terminal which is supplied by sea, likewise for the West Country, (also N Ireland). All the petrol products, including super grades, that are bridged in by sea are likely to be blended with Ethanol when they leave the refinery.

At one time Shell were running their super grades directly by road from Stanlow refinery on Merseyside, as far afield as central Scotland. This maintained Ethanol free status for these grades, but I am not sure if Shell still do this.........

So there you have it - if you live in “middle England” you are probably safe with your super grades being Ethanol free. If like me, you live in in the North, SW of England or N Ireland - then “May contain nuts” applies......

Very good explanation Eddie from someone who has actually worked in the industry.

I noticed my local BP Ultimate has had an E5 sticker for some time now but no detriment to my modified Yamaha FJ. This, like my tuned Audi 5 cylinder Turbo are both sensitive to fuel regarding smooth running and fuel economy, albeit not to any alarming degree. BP Ultimate is my preferred fuel for these though both run well on Shell V Power (always more expensive even though their basic unleaded may be cheaper than others at times) Neither like Tesco 99 for some reason.

My Commando with a modified Fullauto head and actual 8.5:1 compression has none of these problems with fuel and has run all year round including euro tours on everything from e5 or e10 regular to Aral 102 premium with no obvious effects on performance or recorded fuel comsumption. I think this is more to do with the mild tune and excellent combustion characteristics of the Fullauto head and Trispark than the fuel but it normally lives on BP Ultimate and the back of the inlet valves as seen through the spark plug hole, remain clean with the backcuts below the seats still shiny after 12,000 miles.

Thank you Eddie for the…

Thank you Eddie for the clear explanation.  I have to take issue with you regarding "no laybys in the Sky".   This infers that we have safe laybys on our roads.  Not so.  The switching to "smart " motorways is a dangerous move , Surely we should now demand fuel as "safe" as Aviation fuel if we are to be denied safe areas to break down??.

Thanks Eddie for the clear…

Thanks Eddie for the clear and concise explanation of fuel containing ethanol, excellent.

Looking at the photo of the fuel pump that Peter McDermott posted it is hard to understand why the price of gasoline is so high in Great Britan....

If I have done my sums correctly the price shown as GBP1.45/liter (assuming in round numbers that there are 4 liters in one gallon) equates to GBP5.80 per gallon which further equates to US$7.42/gallon.

Certainly there are not of oil wells in Great Britain and most if not all of the oil has to be imported but,  this price seems way out of reason to me. Further, the cost of refining the oil into gasoline cannot be much more expensive than it is here in the U.S.  Are the middle eastern exporting countries just gouging the UK?  Or are they just getting back at the UK for all the exploiting that was done in the early 1900s?

I am surprised that the motoring public has not made the UK politicians answer to this........

We are being taxed to death,…

We are being taxed to death, to allow the government to spend fortunes on aid and infrastructure, Its about time we had a revolution, which just may happen if Corbin and his Marxist cronies get in. Then we can have party member only shops for the necessities of life. Public services will collapse when the Unions run riot , The dead will not be buried and rubbish will not be collected (it happened with Labour before!) The currency will be devalued by 50% but that will be ok as the unions will get double wages for their members ,those non union folk ,pensioners etc can go without. Whats left of our industry will up sticks and go somewhere else. They will have to re- build  Hadrians wall to  stem the flow of population fleeing the communist state of England.  Lets hope its all a bad dream!!.  Oh No ,I read this morning that big utilities are relocating to Switzerland. Dammit,everything I say always comes true,should have kept quiet!.

Robert, this isn't the place…

Robert, this isn't the place for your worthless and ill thought out political comments.

Try imagining the senceless brawl if we all have our say.

Just funning,   But I can fully understand it if your sense of humour has suffered over the past few years.

Until North Sea oil was…

Until North Sea oil was available, the UK imported all its oil but had huge coal reserves. And WW1 bankrupted the nation. So oil was heavily taxed because it was all imported  and coal was not. Until the 1950s and ever 60s, many pump fuels contained benzoyl...obtained from coal at gasworks. It is the reason why UK bikes and cars have such small engines compared with USA.

Strange, that the value of…

Strange, that the value of the £,  against the €, was at it's highest in the early 2000's under a Labour government.  This is a biker's forum, please keep politics out.

As others have pointed out, the UK has lots of oil wells in the North Sea (although they are steadily running dry).

So where would all this ethanol come from that would need to be added to fuel? It does not make sense to import it to add to fuel just to comply with EU legislation, which the last time I checked was 'can contain upto'

Remind me - just when did they become linked?

It is the same here in the USA!

It seems that a politician's prime motivation is to get re-elected. All other questions are secondary.

It's not going to get any better.

The environmental movement has given governments carte blanche to tax and hound the population 'for our own good'...If they want more money then they just have to think up a 'Green' name for the tax or regulation and suddenly it's O.K.

We're not the first generation to think it, but it must now be so that the Golden Age of motorycling truly lies behind us.