When I first got my bitza '48  Inter, it was fitted with a TT carb with the float on the right side. Not having an encyclopedic knowledge of a possible application for this odd thingy I'm hoping that someone here will know what it was meant to fit. I eventually found the correct carb and float but am still curious.  Marked 1-1/8" but bored to 1-5/32". 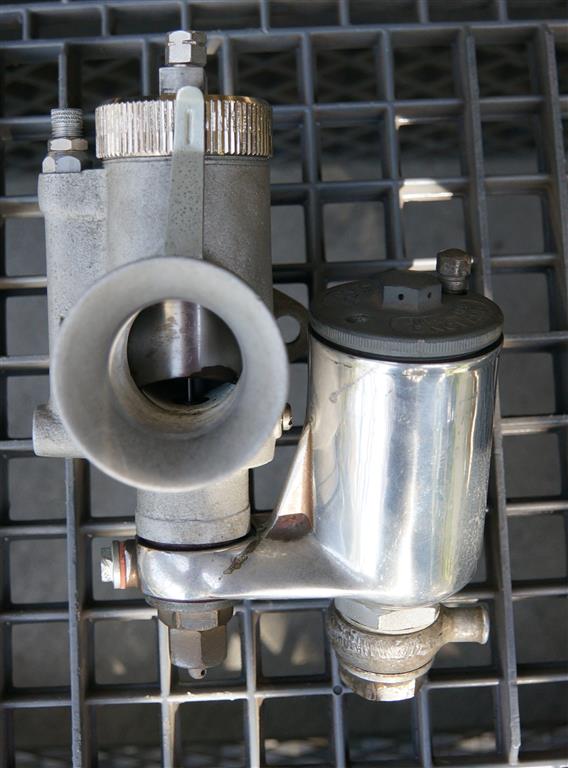 If this is a short neck body and 15 degree float, it is most likely to be from an early BSA Gold Star ZB. There may have been other appliations, perhaps Excelsior Manxman or similar.

....as I now see listed on the Amal 1940-54 parts list though actually finding a photo with the right hand float isn't easy. Everything I find is a left hand float TT or a Monobloc.  Interestingly, the only other application I can find on this list is for a Grey Flash and Black Lightning.

RIchard; isn't the enrichment device on the right on a gold star?  Be interesting to know the angle (and direction) of the float mount.

Only reference I can find for handed TT instruments is at  Vincent.  Yet they must have been for earlier machines as in 53 they were Monoblock 289's.

I seem to remember reading...early TT were brass.  Eventually they moved to mazac.  But the opposite handed carb remained brass because the tooling costs for pressure die casting moulds were higher than the marginal cost of machine from solid. The brass carb then had to be painted to match the mazac card.  Is that correct? Or was it fot a short time? Are the twin carbs in Jonathan's picture the same material?

Can't verify anything on the instruments, its just a picture on the net that shows a handed pair.

What is intriguing is there is a pair here with a mounted float bowl for the "Standard" carb and a remote for the opposite hand.

That's why I asked the question of Michael regarding the float bowl angle.  Maybe he has a RH15 degree?

and I also have a pre-war brass version, long body w 15 degree float. Even if this were painted, they would give themselves away with their internally threaded bell mouth. I'm also puzzled as to why Amal would make an entirely new carb for such a limited application. 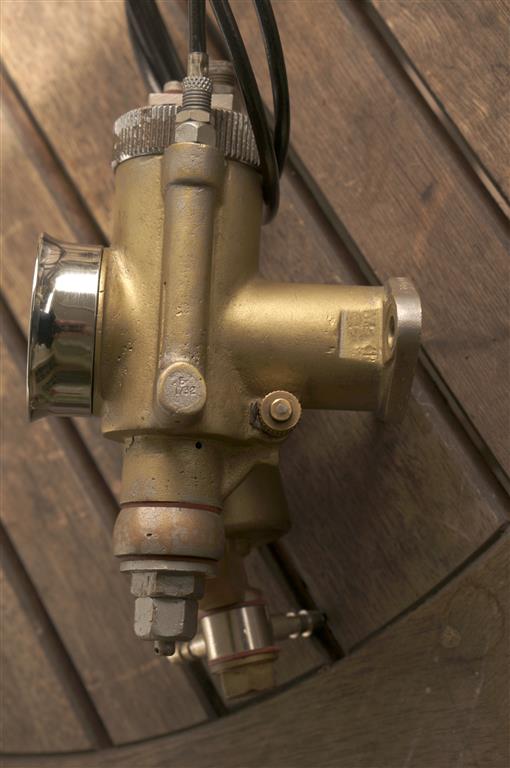 Not sure if it was long body though.

The 15 degree float, is it for a left side or right side mount?

Each of these carbs has the appropriate sided float bowl ......

.....both 15 degrees.  I looked for years to find a good TT sided correctly and finally bit the bullet and bought a new one from Burlen. Big ouch.  1-5/32" being the correct size. 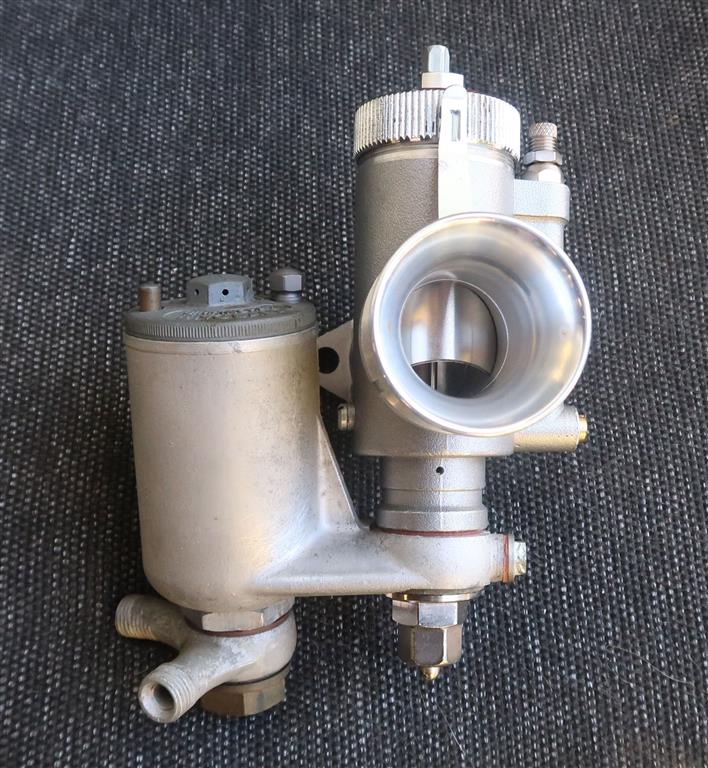 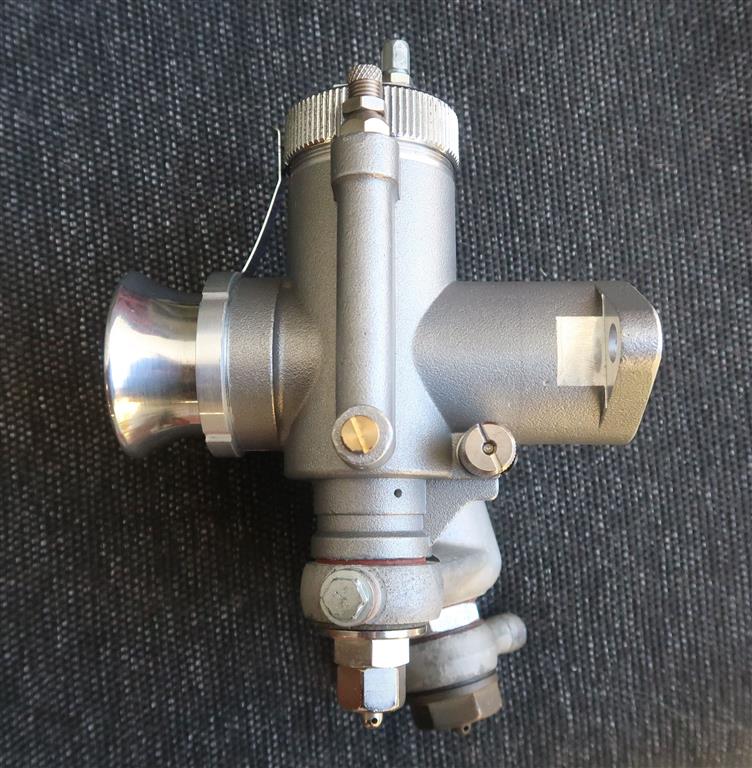 I’m running on a concentric whilst I bed the engine down after a full rebuild. The TT is now refurbed care of Burlen.  I just need to get a few miles under its belt to refine settings then go back to the TT for the new year.   Carb in your original post should cover the cost of the new instrument.  I’m gthinking it’s for a Black Lightning, not a Shadow.

Best wishes for the holidays

Yes Jon, I think you are right about the BSA fitment for the air slide. I thought the monobloc carbs didn't come out until 1954, but I may be wrong. Norton didn't fit them until the 1955 season (late '54). I think all the road spec series C Vincents used 276 and 289 side float carbs and series D used 376/389 monoblocs, but you would need to check with a Vincent expert for that. TT carbs were not fitted to road spec Vincents, unless to special order. The racing Black Lightning engines used a front type cylinder head on both cylinders to enable a larger inlet port, which was not possible with the rear type head.

David/Michael, the aluminium used on the TT, RN and GP racing carbs was a better quality than the Mazak used on the standard road types and is a lot more robust. The brass TT carbs were made along with the aluminium ones and I have a brass TT38 with the small later type bellmouth as used on the later versions. PHEW it's a minefield to track down all the variations.

Yes, it’s easier for us noccers as there is so much information and support for our models as they were successful. The guys with the New Imps and Levis type machines must have a right royal  game finding the right stuff

I replaced the correct…

I replaced the correct narrow parallel slide return spring in my early brass TT carb with the later conical type after I had a couple of random incidents of the slide being reluctant to drop back down.  The conical spring needed small tweeks to fit.  I imagine it was introduced for the same reason.  Another little change. The biggest change being to the intake ( which opens out much more quickly on the early carb) and the corresponding bell mouth which is simply screwed to the outside.

And talking of bell mouths for the early TT.  They are not made to the original design any more, but the later large size for concentrics will fit.  But you should use a spot of Loctite or it will come off on the road (like mine did...)