We're wondering if the ES2's seat and its mounting points are original or a later modification / addition. 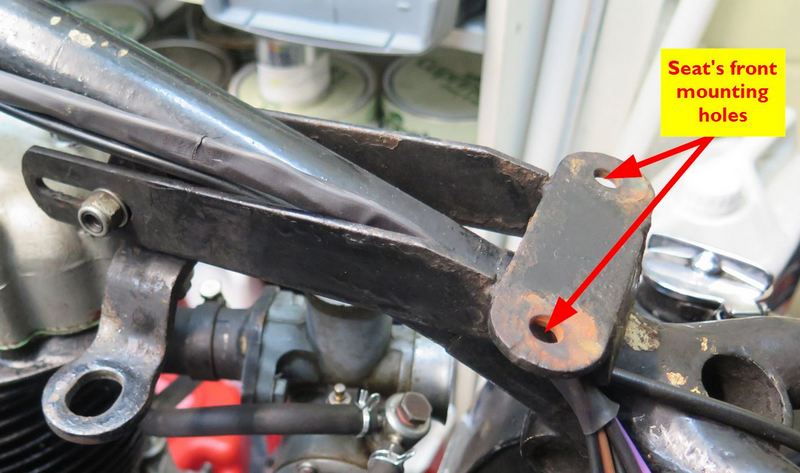 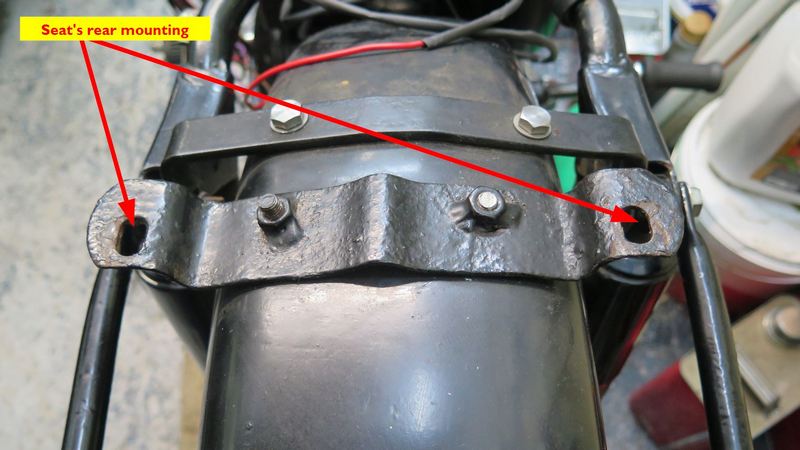 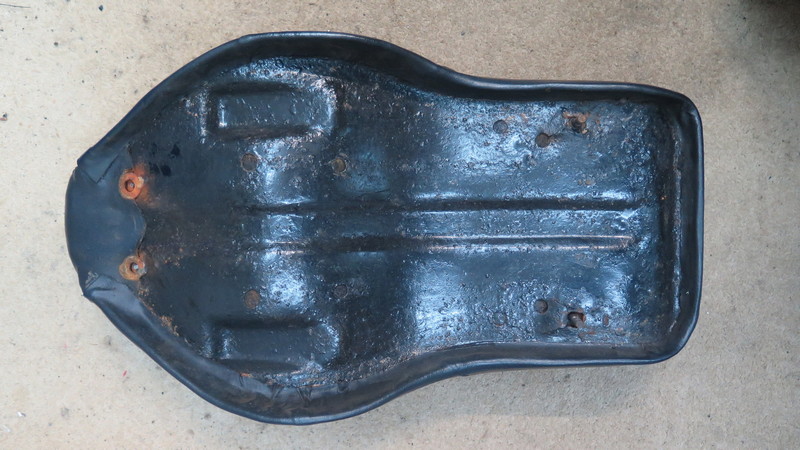 I've been through this a bit…

I've been through this a bit with my 54. Project ongoing and still haven't solved it. Those parts including the seat look suspiciously like  1955 parts. 53-54 I thought had a U-shaped bracket bolted to the seat base that registered with the shock absorber top mounting bolts. Tge front bracket also had a section at the bottom that rested on the frame as well.

.. looks pretty home made to me. Is it a plunger or swinging arm model?

Here are a couple of pics of…

Here are a couple of pics of what i believe is an original 53-54 seat pan ( a bit worse for wear) plus a front bracket taken from a very original 53. much the same as what you have except fot the downward facing tongue that rests on the frame.

Simon. Yours looks the same as my '55 ES2 seat. I have always thought the front mounting was a little crude and over engineered but it works. I ride two up quite a lot and didn't think the rear mounting provided enough support so made a couple of extra brackets that mount to the top shock mount. Probably not needed though.

simon  your frame and…

simon  your frame and mudguard fittings are the same as my 19r 1956. Also the seat with the threaded holes is the same.

Thanks Graham, that’s handy to know. I think I’ll have to get a 1955 parts list to complement my earlier ones!

Thanks Chris, it’s useful to…

Thanks Chris, it’s useful to lnow mine isn’t unique!

Thanks Ian, it’s good to…

Thanks Ian, it’s good to know that the arrangement works okay. It does look a bit strange.

Anyway while this is not absolute proof, I think both my bikes have the same seat pan, which means they may be the original factory piece. It's similar to Simon's pan but not exactly the same. I have not had the 1954 seat off yet, but it appears to match and the brackets look factory to me. I only have a photo of the poor-condition 1953 one because it's off the bike (I circled the mount points that are actually used in the other photos): 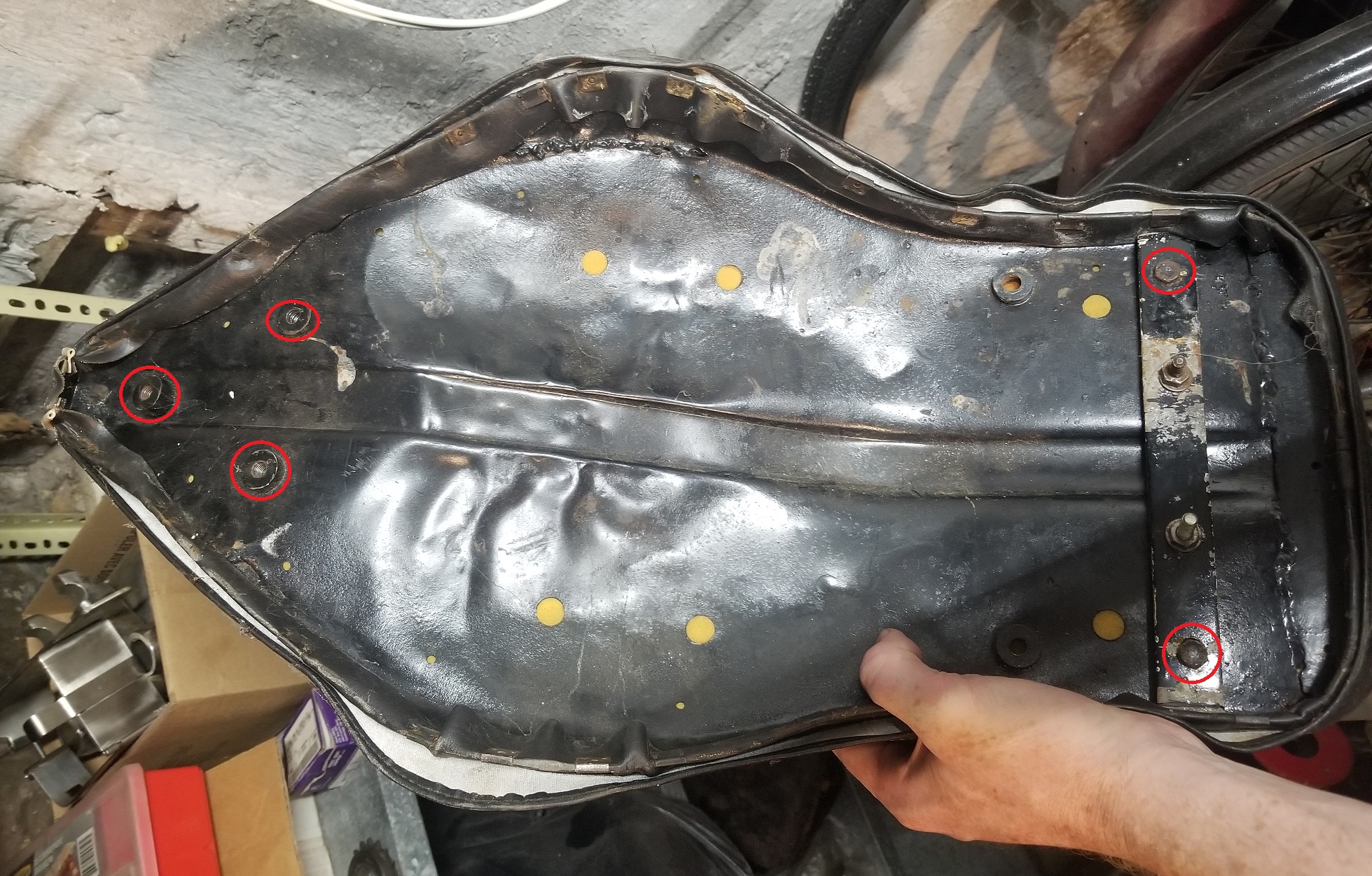 Now some shots of the 1954 seat (still on the bike). This pan appears to be mint and the seat's been nicely recovered. Note a U-shaped bracket connects the front three lugs on the seat pan to the front frame lug (no contraption as shown in Simon's first photo). I tried to circle the three bolts corresponding to the lugs on the seat pan: 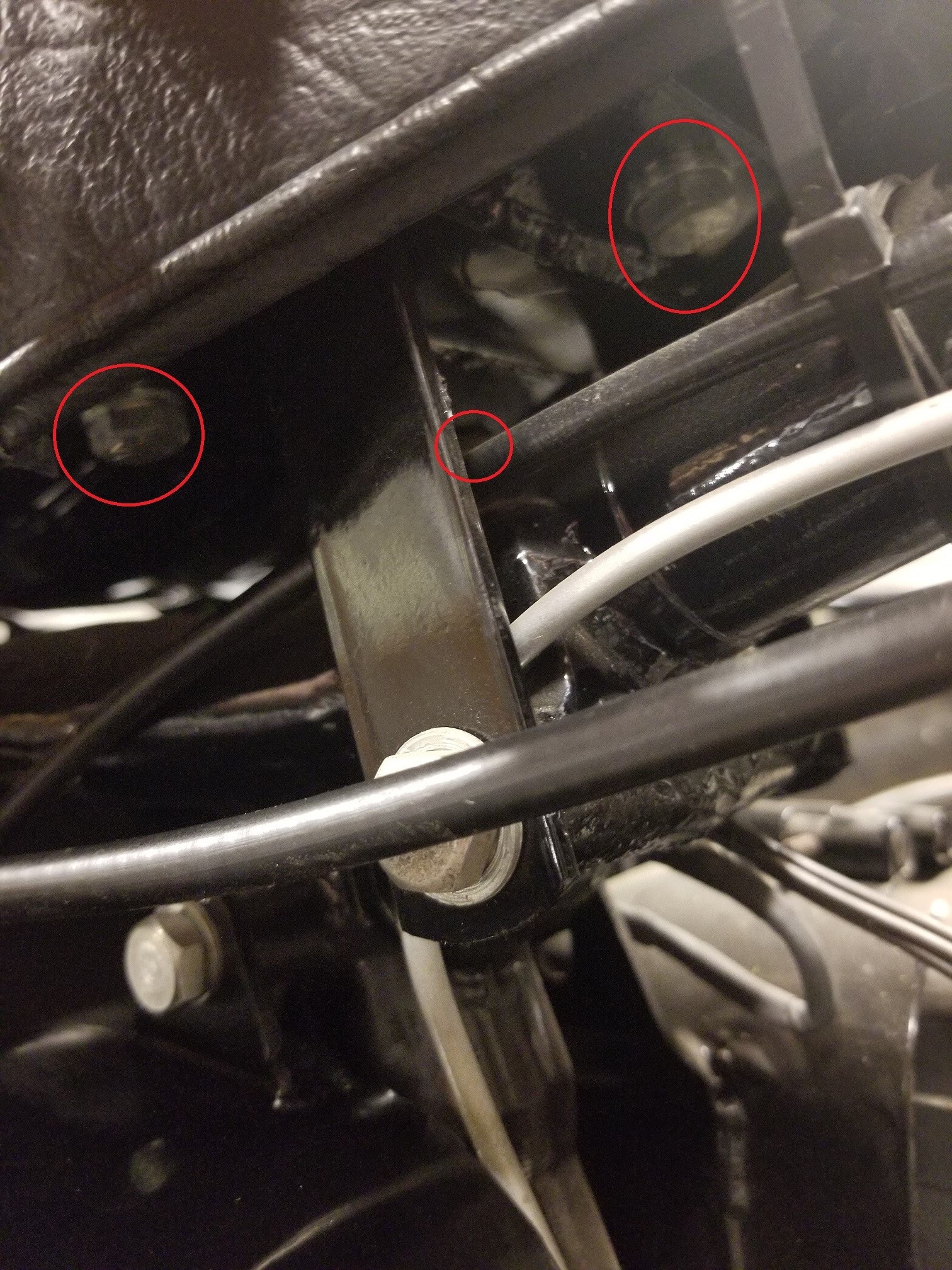 Now the rear is mounted with the same REAR bracket as Simon's seat (only half is visible in this photo): 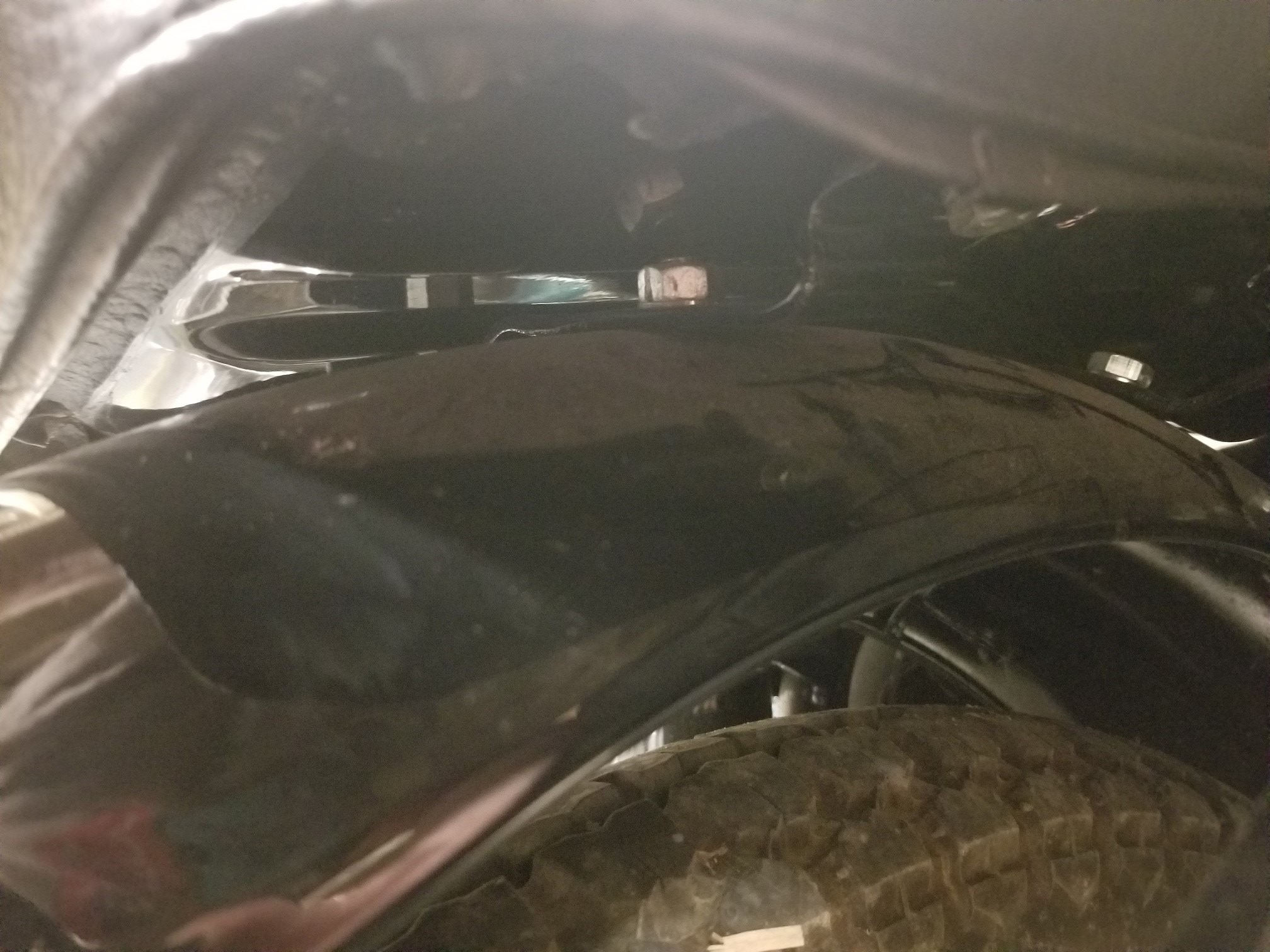 I would appreciate everyone's input - do I have the real 53-54 seat pan and brackets here or possibly two later replacements? Or a mix?

I could really be wrong -- Chris' info seems plausible to me too (but doesn't match what I have here). The front lugs on my pan might fit a bar that picks up the shock mounts, for example.

I am a building an ES2 bitsa…

I am a building an ES2 bitsa at the moment, the frame is 1953 as it the tank, so I have been looking for seat. This subject seems to cause much debate, the Norton adverts at the time, and Leightons confirm that the 53 seat was flat in profile, not dipped like the 55 seat, (Not sure about the 54).

after some discussions with Leightons they are going to have a few bases made so they can make up a small run of seats. I’m having one, if anyone else wants one best get onto them pronto, however it won’t be cheap - approx £300.

What I don’t know is if the bracketry is the same as the later style seat. This is the report from the motorcycle at the time of the launch of the 53 model. 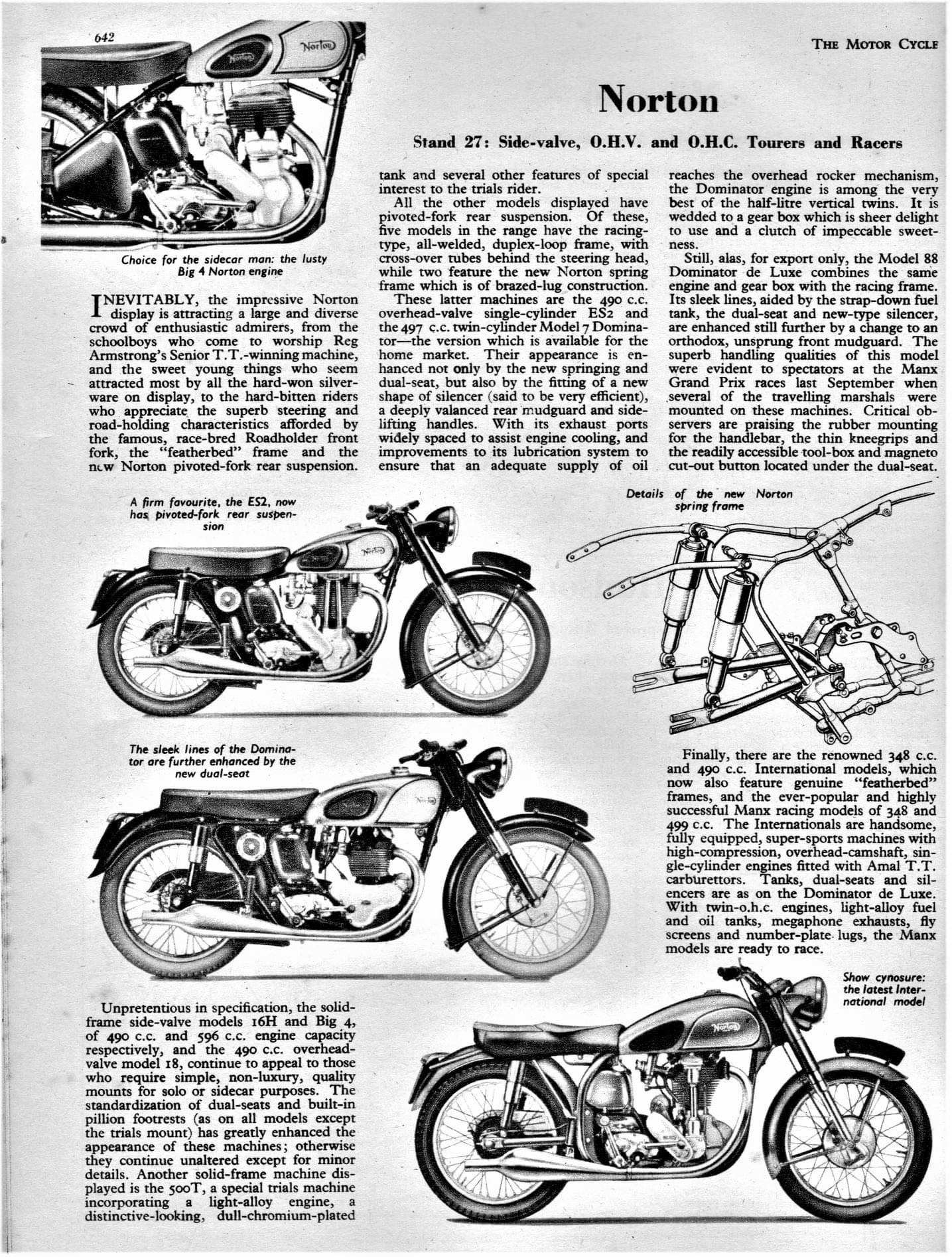 Fairly sure your dual seat is a BSA , perhaps B33, A10 etc. Might be worth looking on the web to see if you can find one similar to check.

Leightons copies are usually pretty good, I’ll post a pic of it when it arrives in a few weeks time.