Can anyone advise on the follow in regards to my petrol tank.  I have an ES2 1938 whose tank is to thin to repair again I'm told.  Thing is I have a copy of the factory record thanks to Chris and it states it had an inter tank at the time of order.  As far as I know it has the original tank which is larger than the standard tanks fitted on the ES2, so would seem to back this up.  However it doesn't look like an inter tank to me. I was thinking of using mine as a pattern or should i look to use an inter tank of the time to be as per the records, although it might look strange then.  I've only ever known it as is but I like to keep it looking as original as possible, and wondered if it would be right to change the tank at this time in its life. (We have had the bike since the early 80's so always possible its been changed along the way, and I've added a photo so you can see how the tank sits well behind the carb unlike a standard tank)

My humble opinion is that you may go for making a copy of your old tank. After some 40 years you've seen it with this tank, you'll never be happy with it looking different. Even if it sometimes long time ago, had the tank changed, it is still a part of it's history.

My memory says that pre-WW2 Inters had soldered tanks with the 'pie-crust' along the bottom edge.  I think you may have a post-WW2 Inter tank.  The petrol filler cap is larger on an Inter, that may be proof.

Another anomaly is the plunger rear suspension.  It looks like a post-war design.  What does the frame number say?

I note that you have the correct 1938 silencer, known as the 'cow's udder' - people didn't like the appearance, and often threw them away.  Yours is a very rare survivor.  How do you like it as a silencer? 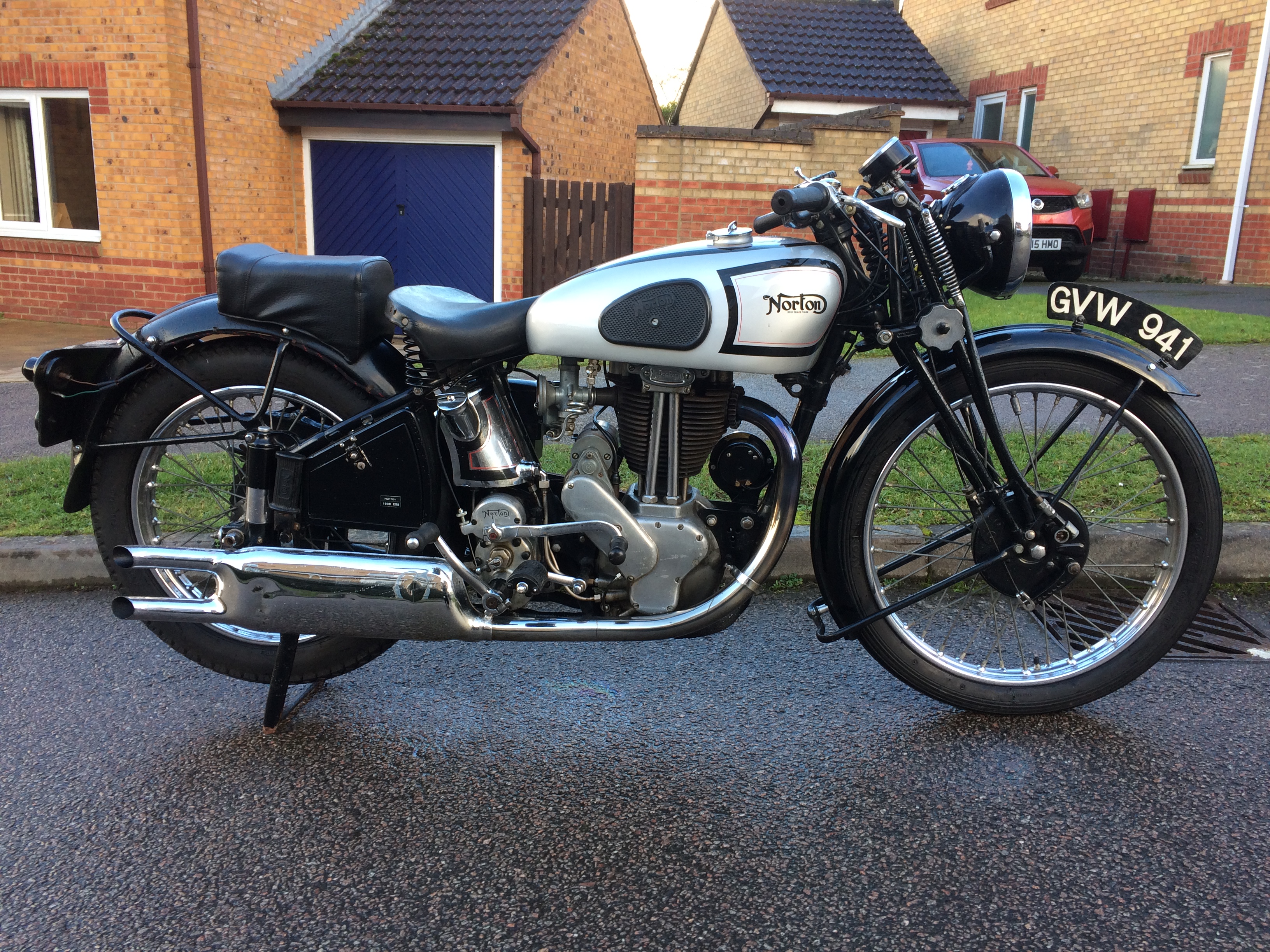 Thanks for the comments, I do agree that it wouldn't be the same as I've always known but then again it was ordered with an Inter tank of the time, according to the factory records.  Decision time??  Getting hold of one may be the issue though.  Excuse my ignorance larger filler cap? ok wouldn't know the difference.  The bike was registered in Dec 38 which I understand makes it a 39 model and the frame numbers etc all check out and the records state it was ordered with a spring frame which was offered as an extra at the time for the first time according to the copy of the abridged price list of 38 models i have, so yes a little different to the average.  In regards to the silencer never known it any other way and I like it, It sounds as the bike always has to me, and efficient.

A new made tank could be…

A new made Inter tank could be obtained from McIntosh in NZ. At a prize. Both pre- and postwar.

One could imagine that it…

One could imagine that it was plundered of it's pie-crust Inter tank years before it came into your ownership, or that is was irreparably damaged, being replaced with a post-war ES2 item, perhaps? Who knows now?

The Inter tanks do look fabulous.....

The 1938 factory brochure describes a 3 ½ gallon tank available as an option for all models except the International. It looks to be a welded tank fixed in the dtandard roadster way (no through bolts). For 1939, an International-Type tank was available for the ES2 only...Mark's bike looks like a '39 model indeed - It has a 1939 toolbox and the front brake is on the right. The tank here certainly looks like the 1938 3 ½ gallon tank - it's not clear if this was officially used on 1939 models, but it certainly existed...There should be a number underneath which will also appear in the factory records.

Through-bolting was an optional extra on the International.  That's for the Clubman spec bikes, not the standard ones.  It was available for petrol and oil tanks.  I think all the through-bolted oil tanks had the oil filler on the left and no provision for battery.  FWIW my early featherbed Manx oil tank is through-bolted

Your petrol tank looks original and correct for your 1939 season ES2. To enhance the appeal of the ES2, Norton offered a few options to raise the specification, one of which was this tank. Although described as an Inter tank, this was a piece of advertising jargon. An Inter tank will not fit an ES2 frame properly with-out significant modification, so the cheapest and easiest method was to make a tank closely resembling the Inter shape, but able to be fitted with-out changing the frame. This option cost an extra £1-10s-0d (£1-50p) which was half a week's pay for a factory worker at that time. This probably means there would not have been many made, perhaps 100 or so, which means it will be unlikely to find a spare/replacement.

When you say the tank is too thin, is this to get it re-chromed or is it in danger of breaking up and leaking? If you are O.K. with a painted finish, there are tank sealers if it is solid enough. If the tank needs replacing you will be best to get one made to your original tank and retain the bikes original spec., but that won't be cheap! An Inter tank from India will not tick any of the above boxes, so best avoided. All the the pre-war Inter tanks were soldered and not made at Bracebridge street, but by small backstreet firms.

...and there is now (according to at least one Classic Motorcycle shiny bike review) an excellent spray on 'chrome' finishes which will go over conventional fillers.  So pits can be safely filled and smoothed, rather than having to polish metal thickness.  The 'chrome' finish is actually pure silver (like that used on a  mirror, only face up) (which is of course what chrome pretends to be), and it is protected by two-pack lacquer.

Thanks all for your comments, and help.

I think the best action in my case is to stick to plan A and use my tank for a pattern as I'm confident that it is a 3 1/2 gallon from 1938, and will keep it looking as I've always known it.  Unfortunatly it has got to the stage of breaking up and leaking after previous repairs so a new one is needed and this will also allow me get it chromed.  (Always been painted so next investigation is to find out if it was chromed all over then painted lines?  Oh and find someone local to do it.  Always something to do.  The joy of classics)

In regards to this thread I am now looking to get a new one made from mine as a pattern.  Not easy to find someone who still does that.  Any recommendations at all would be appreciated.

Mark, I have sent you (via PM) contact details of someone who made a tank for me a couple of years ago.

Fancy a holiday in either Pakistan or India?

Take your old tank with you and there are a number of shops that will build you a new one that will be a copy of your original.

If you google it you can find some references for them on this site.

Hello if any one needs any welding done then send it to me I will sort it out no matter how thin the metal is I have all types of welding equipment you find my email on the back of old road holder magazine under East Yorkshire Branch your, s Anna j

FYI..... another  ES2 like yours with the Inter style tank has just come up on the   www.vintagenorton.com   website, although you will have to be content with just the photos as it is in Australia.