I'm in the process of trying to repair a 1927 Model 18 petrol tank which suffered from petrol being left in it for over 7 years by the previous owner (because of dementia) and found over 60 holes in the bottom of the tank!  I've been through the process of trying to clean it with the POR15 kit and sealing it, but unfortunately this has not been entirely successful.

From a comment on a forum there was a recommendation for an Indian company called Royal Choppers, who make replacement tanks.  As their website didn't have any flat tanks I contacted them and had a quick response from a  chap called Shaun.  He is quite willing to manufacture a new tank but wants a tank sent to him for a pattern.

Has anyone any experience of Royal Choppers and any advice on sending a tank to India to be copied?  Ideally it would be good to find another identical flat tank which is in really poor condition, but intact to act as the pattern.  Does anyone have a donor tank which they would be willing to send to India?

My thoughts are that a new tank would be made in welded steel, rather than soldered joints, then a decorative "pie crust" added to make it look right.

Any help most welcome.

Have you asked a bit closer to home with someone like 'Metal Magic' in Hampshire? They say that they can make or repair anything in sheet metal or tube.(www.heritagemotorworks.co.uk)

At least that way your fuel tank will still be in the same country.

Try CWClassic.co.uk , highly recommended for both repairs or new build and competitively priced.

Thanks for your suggestions, I'm more comfortable with keeping it in the UK.  I can contact them to discuss how feasible it is and what sort of price it would be.  It would be good to know if there is any more demand for these tanks as one offs are expensive.

There is somebody in Dorset who make Triumph flat tanks, but the delivery is at least 6 months and costs approx £1k.

Do you belong to the vmcc ? There is a current thread on their forum re flat tank replacement that you might find useful.

Thanks for your note.  I'm a VMCC member so will have a look.

I've just sent my 1927 Model 18 tank to Performance Fabrications for him to assess how to make a replacement tank and estimate the cost of doing this.  He can make them in steel or stainless steel, but I would choose steel so that the paint adheres properly.

If the price is reasonable is there anybody else in Norton land that would be interested in having one made.  As with anything, a single item is expensive, whereas multiple items are cheaper.  This would be bare steel and would then need to be painted. 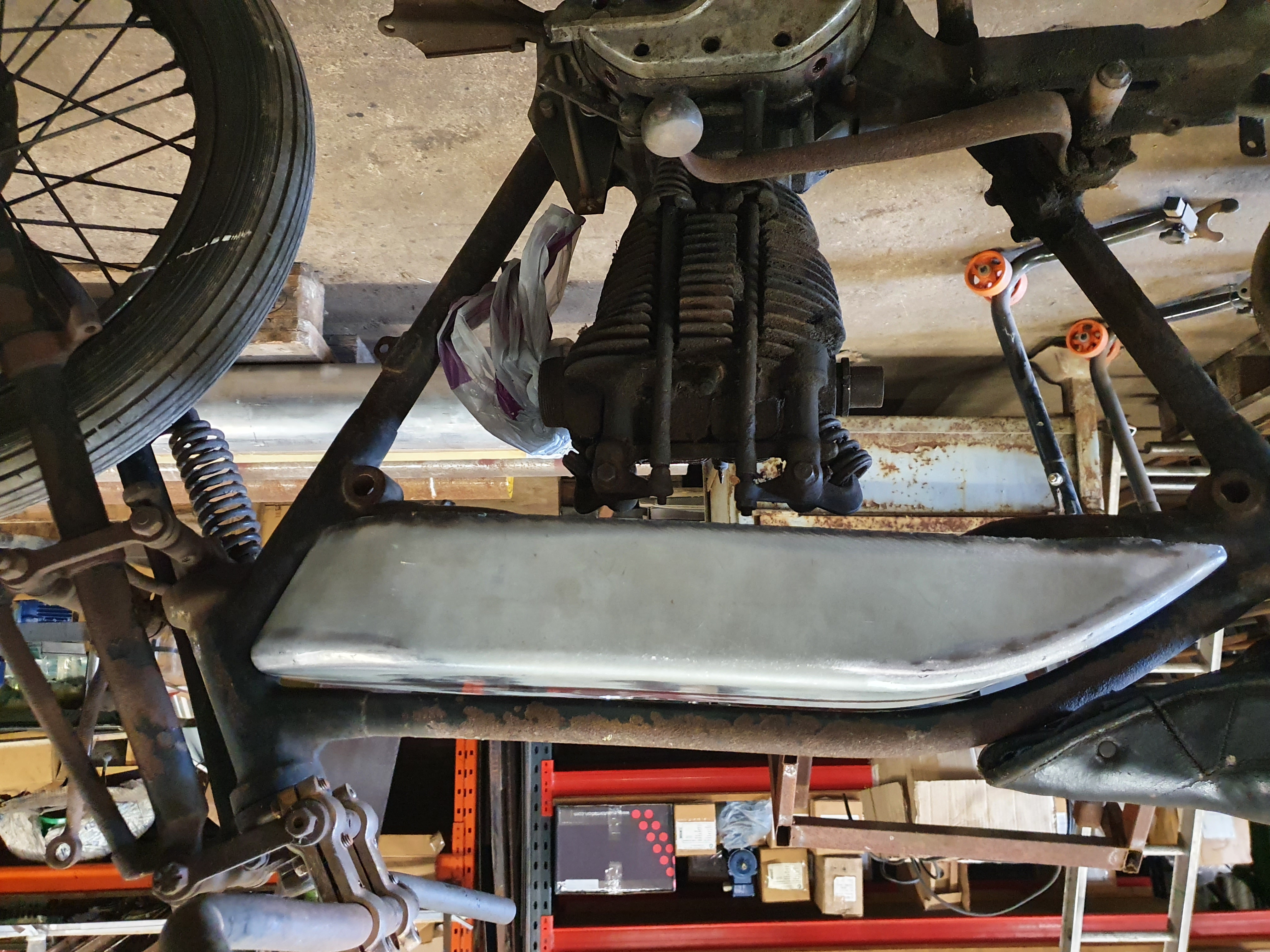 I have made tanks for three…

I have made tanks for three of my bikes.

Very time consuming and would be expensive to do properly.

Will try to post a few more pics of my efforts as I finish them. 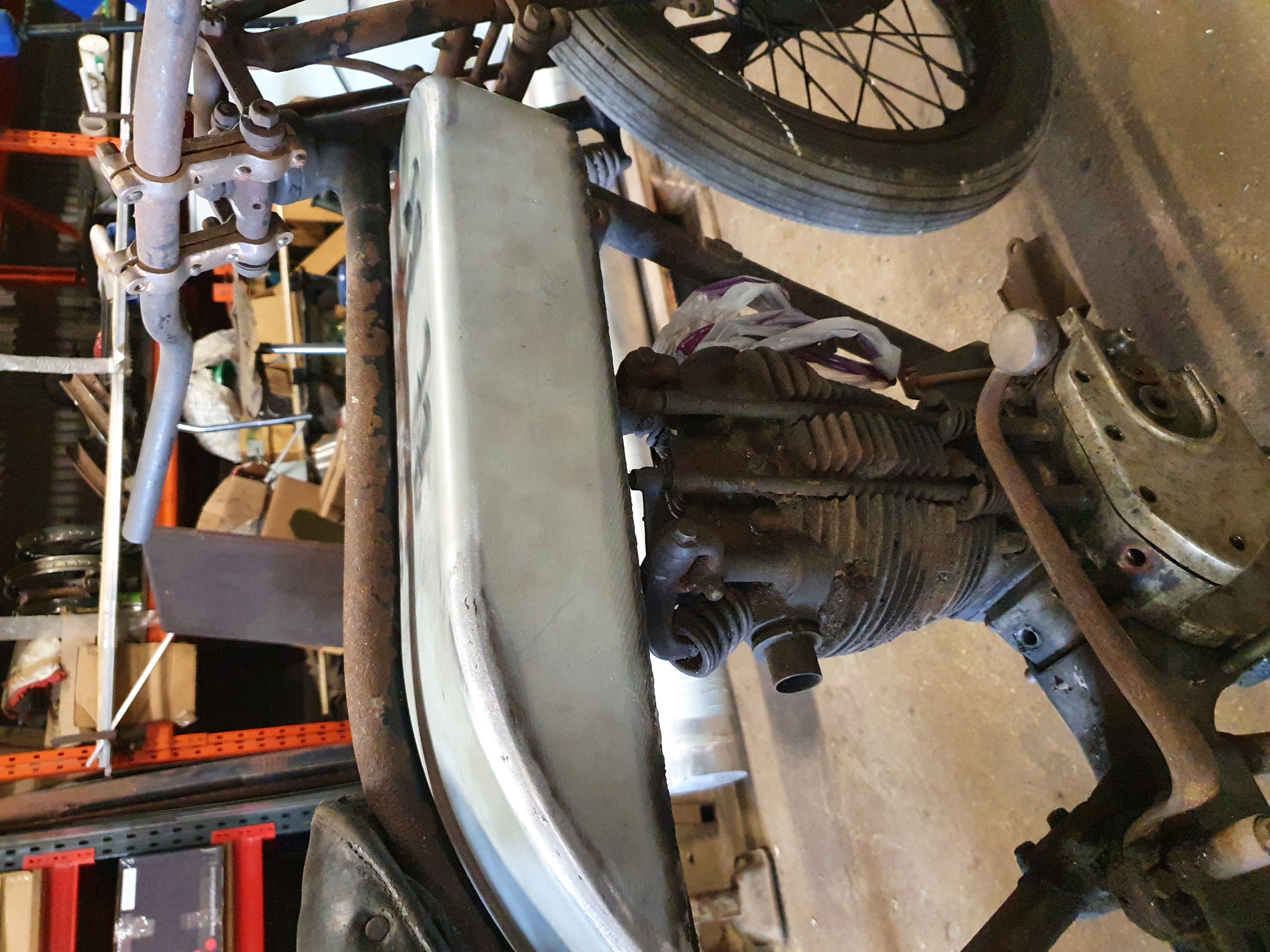 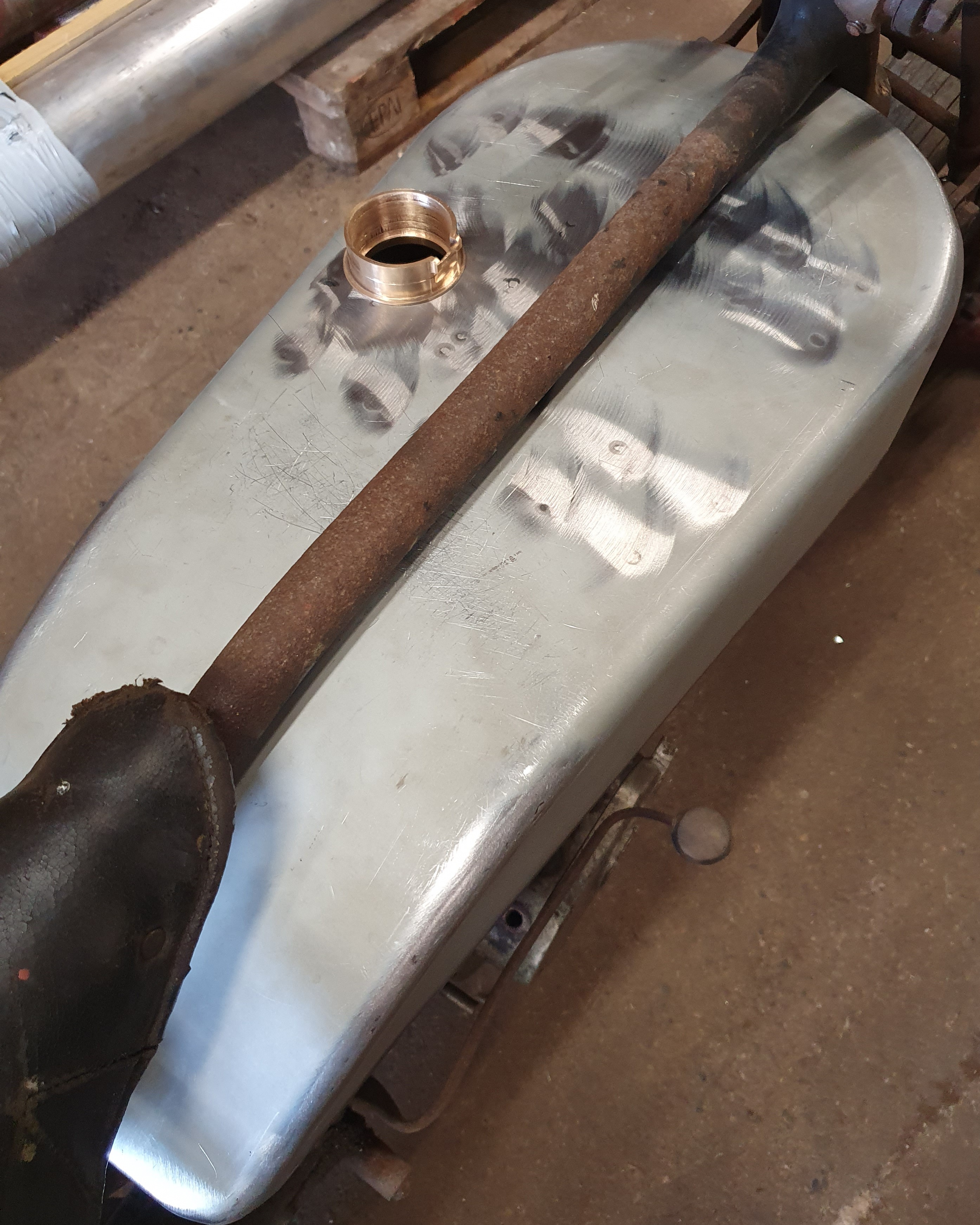 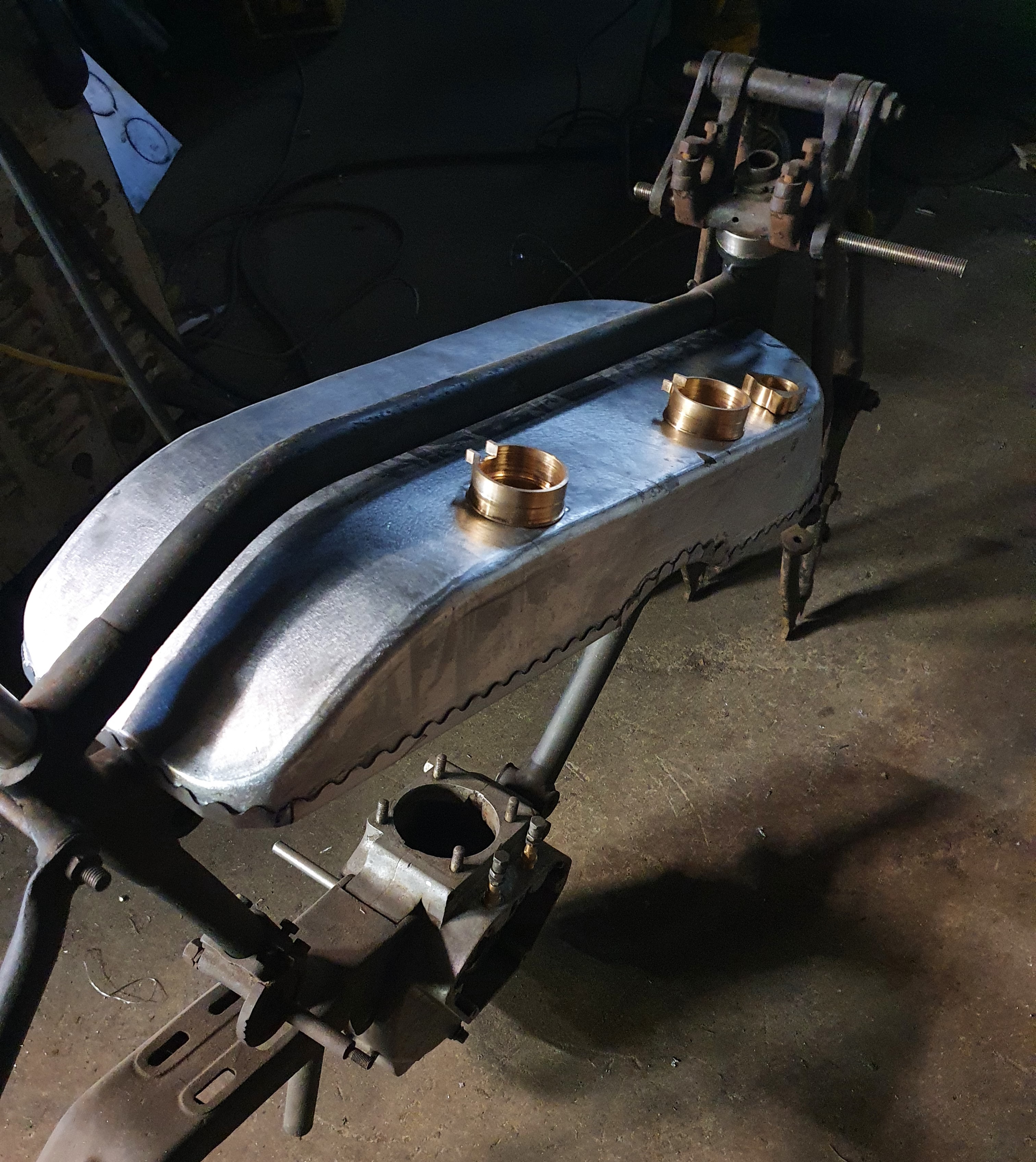 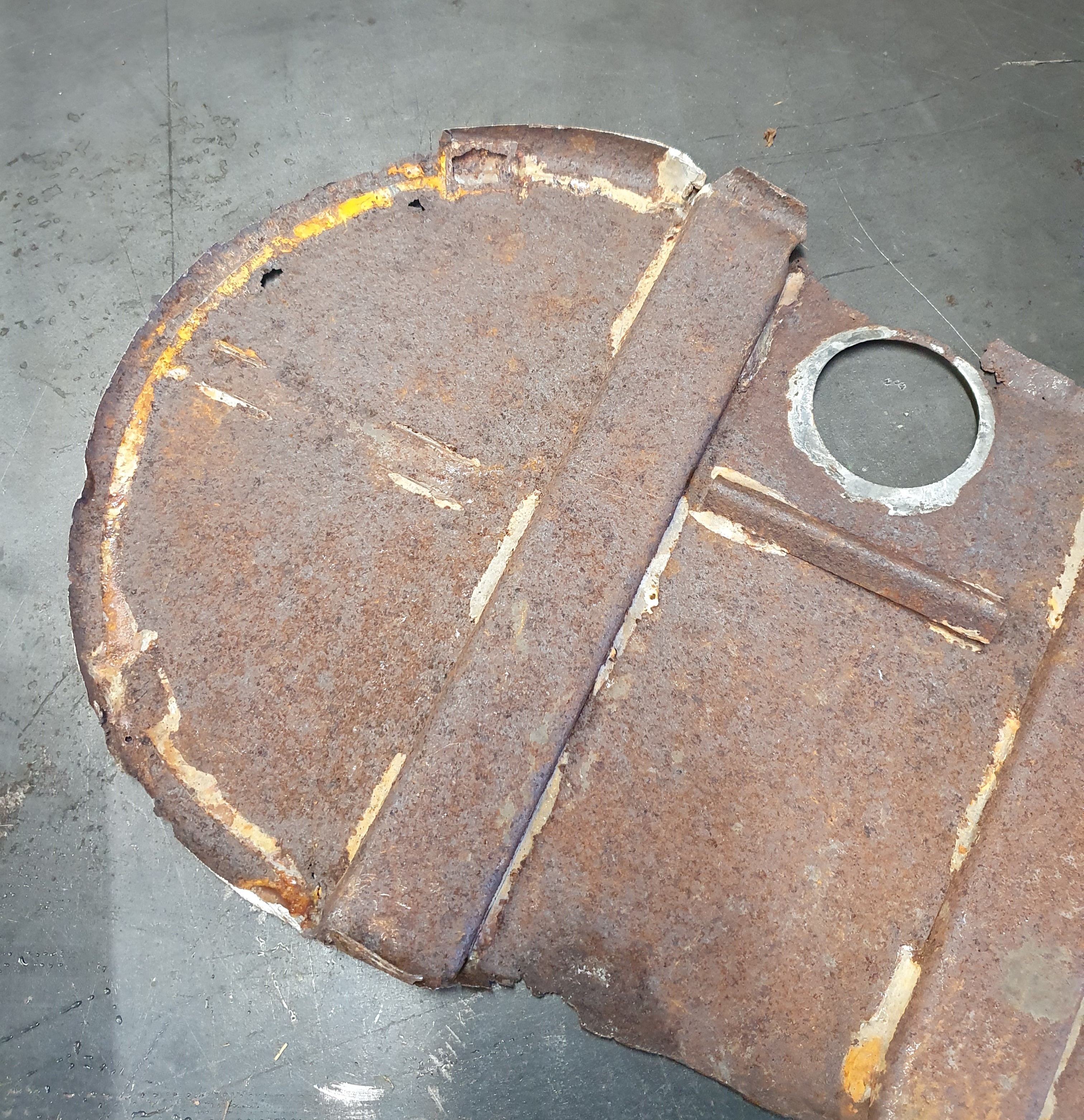 If you wanted to view the insides of an original tank to draw up the supporting pieces I have one you could look at.

Thanks for your photos, I'm interested in the filler cap necks that you have made - looks like brass.  Will the original Enots cap fit this neck?

I would be interested in the internal supporting pieces if you have details.

I made the necks from brass solid bar offcuts from my scrap bin.

They are easy enough to make.

Where are you based? You could measure any of the bits you need from the halved tank or I could try to sketch.

Send me a private message and we can gave a chat. The pattern above was made…

The pattern above was made to act as a hammer block for some tanks I made earlier this year.

It is the only way to get the radius at the frame top rail a nice fit.

Have made an Aluminium and steel tank now. The Aluminium one was much easier to do.

I tried sending you an email last week to ask if my tank manufacturer in Stockton on Tees could ask your advice about making these tanks.  I would like to phone you for a chat if you could let me have your number please.