Hi All - has anyone used the Wassel (Vape) Electronic Ignition system on a lightweight yet?  Getting to the stage where having to think about what to use - Pazon, Boyer, Wassel etc.  Wassel is about 1/4 (£) cheaper than the other two and “seems” to be just as effective & reliable.  Anyone know - does it fit (as Pazon have a specific kit for the lightweights)?

Wassel products generally have a less than ideal reputation , Pazon  have  worked for me .

Hi Bruce, I installed the…

I installed the Vape ignition, only the base plate made by myself. 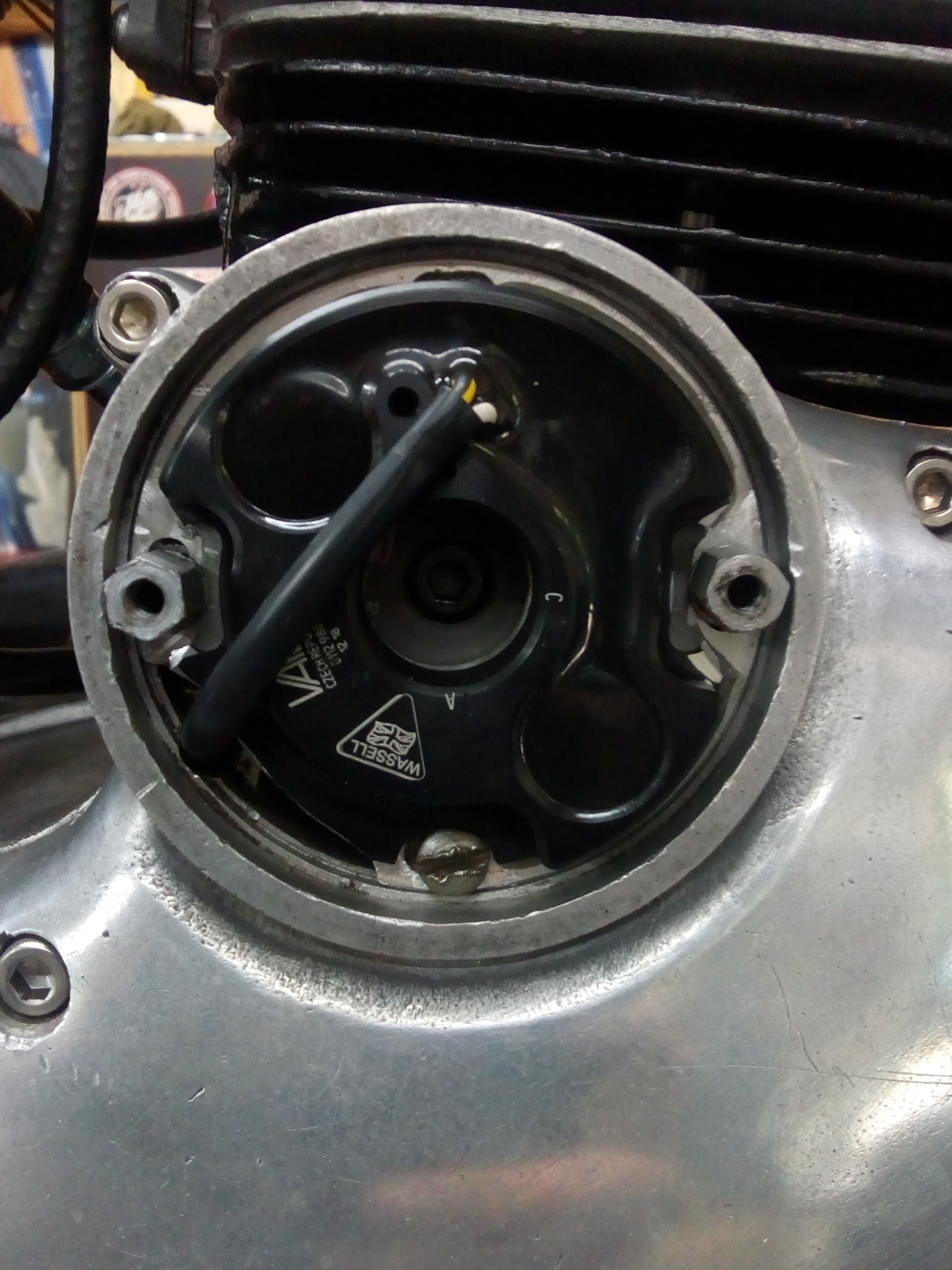 Can't comment on lightweights but have a Wassel system fitted as a replacement to my Boyer which was on a 1971 T120R Triumph. The Boyer had lasted 15 years until it started to breakdown when under load otherwise fine. The Wassel has been on 2 years and always starts the bike first or second kick. It was cheaper than Pazon and my local classic workshop said in his opinion little to choose between these 3 options. In did like the encasement of the important bits in hard plastic (as the photo above) unlike the Boyer which seemed rather exposed. The Dommie is still on its original set up but wonder consider a Wassel replacement if its starts playing up. Trust of some help. Hugh

Thanks Martin - that answers…

Thanks Martin - that answers the question about “fit”.  If I’ve got to modify the pickup encapsulation to fit it then I’d have a concern over any warranty issue.  Looks like it’ll be the Pazon then!

I have a Boyer system on my…

I have a Boyer system on my Jubilee, I can start it by pushing the kickstart by hand! Works well for me but you need 12volts. Al Osborn has a lightweight and is worth talking to.

Hi Dan - yep, electrics all done (bar the engine/alternator) & converted to 12v - all tested & working.  Modified the new loom & using reg/rect from Al Osborn (used his site for info - very usefull!).  Jubilee now a full complete rolling chassis (except, new seat cover - on order, and front mudguard - painted yesterday - to be flatted/polished then fitted), engine next to be rebuilt.  By the end of this virus stuff I should hopefully have a running m/c!

Just ordered a B B system,…

Just ordered a B B system, looking at wiring diagram it’ll slot straight into the wiring I had set up for Pazon!

I have a Boyer on my…

I have a Boyer on my Commando and the 'black box' failed once. I knew it was the black box as I had another & substitution effected a cure.

I sent the 'broken' one back to Boyer (it was already 10yrs old or so) for testing, and they returned it as 'no fault found', with a photocopy sheet of fitting instructions, & potential errors in fitting.

However, the jelly (or potting compound) was fresh, so they had dismantled it, potentially found the fault, fixed it, re-potted it & returned it to me - FOC!

When I examined the sheet they sent me, they highlighted a potential wiring fault I was to check. You know what? They were right. I can't remember now - but they were right. I had two wires crossed. It worked for 10yrs or so - but then failed.

That amplifier is now back on the bike and I have had no further issues.

So Boyer for me every time!

Al Oz (Osborn) sells a version of Boyer adapted for use on the lightweight twins.

Al is our Electrical Guru. See inside back page or more details - or contact him on electrical@nortonownersclub.org

Thanks, Hugh for your words…

Thanks, Hugh for your words of wisdom & foto.

However, I think the wires look a little vulnerable to vibration where they exit the unit.

I might be tempted to just dab a blob of silicon sealant on them to provide a bit of support against the vibes.

I fitted a new Pazon pick-up into a Navigator for a friend last week. Not the first one I've fitted. Found the four slotted holes on the periphery were wide enough to take the screws, but on too small a pitch circle.

What this means - . You will have to take a needle file to the outside edge of the slots and CAREFULLY  file away the slot outer side edges, thinning the PCB material between slot and outside of PCB.

Tiny bit filed/sanded from outside diameter too, so that the PCB could be turned for timing adjustment with four loosened fasteners.

Don't hold the pick-up coils to turn the PCB.

A small screwdriver in one of the slots as a lever can usually rotate the PCB.

The Pazon offers a choice of wire connection by solder pads or micro terminal block. From experience the soldered option is more reliable if you know how to solder.

Plenty of time to get things spot on at the moment. Happy fettling.

By the way, you ought to check there is clearance between the pick-up and the rotor when assembled. You can gain a bit more clearance by filing the ends of the pick-up connections where they poke through the solder on the back of the pick-up PCB. The clearance reduces as the shouldered timing side bush supporting the inlet cam wears and the camshaft is pushed further out by the spring and plunger on the drive end of the camshaft.

Cheers Peter - ordered the Boyer system, I’ll see how their pickup plate fits when I get it.  Good info on the Pazon unit though.  Decided on the B B system as a) it’s cheaper b) it’s a UK system (I think)  c) it’s shown as stock in UK but Pazon PA2L doesn’t appear to be - not really the time to be ordering stuff from NZ! Just got to wait for Norvil to supply the BB system - if they’re still working at the moment that is.

The Lightweight points plate (made by Wipac) is 3" so is bigger that the Commando/Triumph Boyer/Pazon plate. The plate also fits further into the engine than the original points. But all can be overcome.

Wassell products do NOT have any technical backup.

Pazon is available from Paul Goff.