At long last I found the time to drop off my Navigator frame to have it straightened by Abba Engineering in South Woodham Ferrers yesterday and will report back once they have finished the work.   They come highly recommended and certainly seem to know what they are talking about so fingers crossed!

Once it's back I will be starting the rebuild over the winter months which will include a respray to original colours of black and polychromatic blue.    Over the years I have seen several people strip their frames down into each separate bolt together component before respray which I suspect requires replacing all the various nuts, bolts and spacers which brings inevitable cost and complications.

Has anyone had their frame resprayed / powder coated fully assembled and did this produce a good finish?   Did you remove the swinging arm and replace the metalastic bushes and if so was it the hideous job I guess it might be?!    My bushes are sound so I am tempted to leave well alone!

For those who have stripped their frames to repaint them what problems did you encounter and in retrospect was it worth the extra effort / cost?

What is the best type of paint to use for original finish and chip proof longevity if it is being resprayed?

Does powder coating provide a better looking / chip prove longer lasting finish and would it require shot blasting to remove every trace of the paint?

My previous experience suggests having it sprayed in original cellulose but this is getting far more difficult to source.  Is two pack a better option?

Looking forward to hearing the different opinions as always!

Putting together a frame from a pile of bits, I'd be tempted to say if your frame is already assembled, leave well alone! But unlike a slimline, if you get your frame done as is, it will obviously coat the nuts/exposed threads, unless you go to the trouble/expense of properly masking them up, which I suspect is easier said than done.

Again, with the s/a bushes, unless you have reason to replace them, dont create an unnecesary problem. I tried this many years ago with a slimline swingarm, the result is still in the back of the garage somewhere....

Original finish would have been stove enamelled, I think there are still places doing this but hard to seek out.

My preference would be 2-pack, as I used to work in the bodywork trade, I know its good stuff. That said, I left that trade 20-odd years ago, which was around the time the switch was being made from solvent to water base, so cannot comment on the new stuff. Given that its what both OEM and refinish use, I expect its ok.

... powder coating is not kind to silentbloc bushes as found in the swinging arm. I've just had my Fanny-B Cruiser frame etc (similar to Jubilee) blasted but I made the beginners' error of not masking off the fork stanchions and internals of the sliders. It's taken me days to get the grit out.....

To reply to your original question I stripped mine completely. It's not very complicated (he said before attempting to put it back together).

I had my frame powdercoated.It was sandblasted before. Due to the high temperature during the coating process some oil residue which was inside the bolted on frame parts penetrated outside through the flatened frame ends where the bolts go through. This oily stuff was thus melted into the coating. 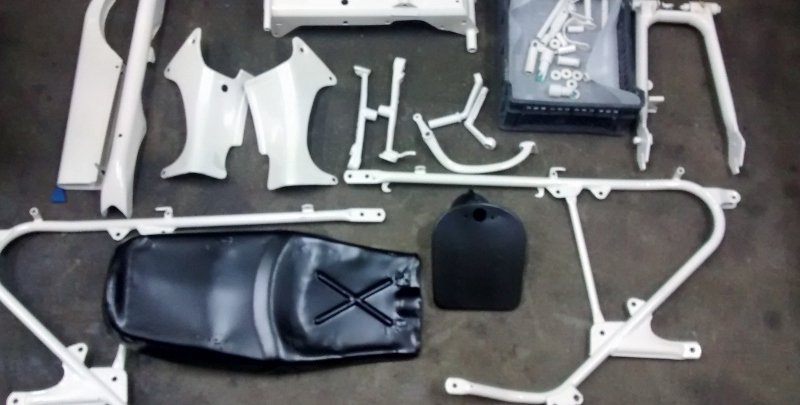 Also the metalastic bushes in the swingarm lost their grease which caused havoc at the front ends of the swingarm.The thick coating needs to be removed where the frame bolts and washers go to get a secure fit.

I would recommend painting the frame.

I’m having similar thoughts about my Navi build, I think I’m going to paint, as Anna says you can’t fill out pitting with powder coating. I haven’t had a problem with metalastic bushes and powder coating, but maybe I was lucky?  I think I’m doing mine in reverse, polychromatic (or similar frame) and silver tank and oil tank etc, that’s what colour mine was when I bought it in 1977 from a guy in Yeovil.

Hi All, Thanks for all…

Thanks for all those words of wisdom - you have convinced me that I am right and this is a good case of 'if it's not broke don't fix it'!    Once straightened I am also loathe to take the frame apart just in case it spoils it's geometry.    Given the generally good condition of the frame and swinging arm bushes I am going to go for a good clean, thorough rub down and stove enamel in original black.   My local paint shop has the expertise to prepare and respray the frame in enamel and are going to do the rest of the tin wear so I can concentrate on the mechanical rebuild which I enjoy more over the winter months.   I will report back as the job progresses!

Dan, are you going for a blue polychromatic frame or flamboyant red?   I loved my late Jubilee in that colour back in the day - I'm sure the bike would have sold far better if it had been marketed that way from 1960 before the Japanese had discovered styling!

Hard for me to comment on painting/spraying/powdercoating , etc - I'm of the rattle can brigade.

If you dismantle the frame to paint, beware of paint creeping into the fastener holes. If you paint the frame complete, what about the fasteners?

Nearest to the Blue is Ford Fjord Blue

Flamboyant Burgundy was a Gold groundcoat, with a deep, clear Cherry Red lacquer on top - a beautiful colour that I've seen on Porsches & step-thru Hondas.

Polychromatic Blue is a metallic Blue used by Birmingham for the Manxman, and Plumstead for the Navigator - but I have seen it in differing shades. My own front mudguard is ex-factory, so correct. My fuel tank is a different shade - Vauxhall Starfire

like you I’m a fan of the rattle can, although I do have a spray gun!

i think I’m going to paint the Navi in a blue frame with silver tank and panels (it’s a bitsa) and I’ll get a record check on the jubilee to find out what colour it was originally as that’s a matching numbers bike.

i know Redditch powder coaters can do metallic lacquers so wonder if they can do a flamboyant red? I have to be very careful with the painting as the frame number is very feint.

Remove the current paint from the frame number and a surrounding rectangle, treat the area with phosphoric acid to rust proof it and then apply a clear coat. Then mask the area minus a margin before painting the rest of the frame.

I,m also a fan of the rattle can. Beside the quality of the paint I think the spray nozzle should also be quality. Do you guys have a favourite for etching and priming.

My first repaint was in 1970. My 1965 Navigator, bought for £65.00, was getting a bit rusty round the gills. Exchange and Mart declared that Hammerite paint cured the rust, covered everything and gave a wonderful finish. I think I removed the wheels and engine. Out came the 1" brush. Hammerite black for the black bits and Hammerite light blue for the blue bits. Looked just like Andy's bike but with the rust and oil covered up. Best applied thick and not overbrushed if you want a good hammer finish.

Between 2005 and 2013 I restored an Electra. Completely stripped. Everything black got rubbed down to bare metal with rotary wire brushes, and by hand. Chemically removed any rust in pits. Primed by brush, enamelled by brush. Multiple coats and rubbing down in between. I left the silver bits to a specialist body shop.

In 2018 someone asked me to restore their Navigator. Even though he was a nice chap, no way would I ever repeat the effort on the Electra. He wanted a finish as good as it left the factory.

I went for powder coating all the individual frame parts but masked off all holes, threaded or not, plus steering head less bearings. I pressed out the swinging arm bushes and masked their holes. Masking with purpose made tubes and collars, capable of resisting grit and paint cure oven took some time. Photographed all the bits to give the painter at handover. He said it made the task of keeping everything together much easier.

The powder coater was a motorcyclist  who knew his art. Everything was grit blasted to remove rust and paint.  He then acid dipped everything to remove any oil in the tubes or other areas that might migrate out and spoil the coating. He primed the pieces with a zinc rich paint for longer life.. And then he sprayed the final coats before putting the parts in the oven to fuse the powder. Cheaper jobs are probably available.

For the larger surfaces that showed, I used the same specialist body shop as the Electra.

As regards long lasting properties. My old Navigator left me in 1970, is still on the road and until recently owned by an NOC member. (It looked factory perfect. I bet the Hammerite caused a few curses.)

The Electra looks good today and the enamel paint is fairly hard wearing and easy to touch up the stone chips.

Time will tell on my last Navigator resto. Looks good now. You don't need to guess which was the most expensive of the three to repaint. Mind you, the chrome plating of the Electra mudguards off sets the paint costs on the Navigator mudguards.

I'd say that all three methods were suitable for my crowded, spider infested, and wind exposed garage. Home spraying? never works for me. I would just warn that careless use of grit blast distorts parts. A grit blasted steel part will always try to curl up, so must be blasted equally at the back. After grit blasting,don't expect the frame to assemble as easy as it came apart. Use someone who knows.

Go your own way Nick

If anyone wants to go powder coating see the attached word document.

This is my method of presenting the parts for painting. I used M8 studding and thin wall 10mm tube to assemble the frame in 'exploded' view style. This to let the painter get inside while spraying. Frame spacers and frame spacer tubes were in this assembly and got painted too.

Other parts were provided loose with instructions for the painter.

It took a little while but I'm very pleased with the end result. MUCH cheaper, and quicker, than going the traditional spray paint route.

Hi Peter, thanks for such…

Hi Peter, thanks for such sage and detailed advice - I'm hugely impressed with the idea of supplying the frame in an 'exploded' state for ease of painting / powder coating and the attention to detail with the printed instructions for the painter - I may well plagiarise your idea when I get round to doing mine!

Having dropped my frame off with Abba Engineering last Thursday I had a call on Monday confirming that they had put it in the jig and the head stock was 'well bent' laterally as I suspected.    They are happy that they can straighten it which is a huge relief.   They said they will bend it back in steps letting it 'settle' over night.   With any luck it will be done ready to collect next week - lets hope I can get it home before the next lock down!    I will report back with cost and quality of work once I get it home.  If all goes well if anyone unfortunate enough to suffer a bent frame can then get it straightened quickly and with confidence.

What has grease got to do…

Ulrich... what has grease got to do with silentbloc bushes?