I am currently attempting to overall my old Navi engine and on strip down I checked the alinement of the timing gears before gong too far, on lining up the two pop marks on the camshaft gears I find no similar mark in the crankshaft gear which has got me puzzled, can anybody shed light on my problem please, there is a small linear mark on the crank gear but it doesn't line up with anything. also, is it possible to split the crank case without extracting the gearbox internals?

Howard, I have attached a…

Howard, I have attached a copy of the page in my original Navigator Maintenance manual which explains how to set the cam timing.   There is no timing mark on the crankshaft gear (half time pinion), you set the crank / pistons at TDC and then line the single dot / mark on the intermediate gear at it's lowest point and if you have set the crank up accurately it will engage with the appropriate teeth on the half time pinion.  I  have a vague memory that with mine that also aligned with the pinion key way but I may be wrong!    You then line up the two sets of two timing marks on the intermediate gear with the timing marks on the cam shaft gear.    Why they didn't put a timing mark on the half time pinion defeats me!!!   I hope that helps - let me know if I can help further.

Here is a pic of the alignment marks on my Navigator engine.

Engine is set on TDC . The crankshaft pinion is marked with a single dot on the keyway in my case. 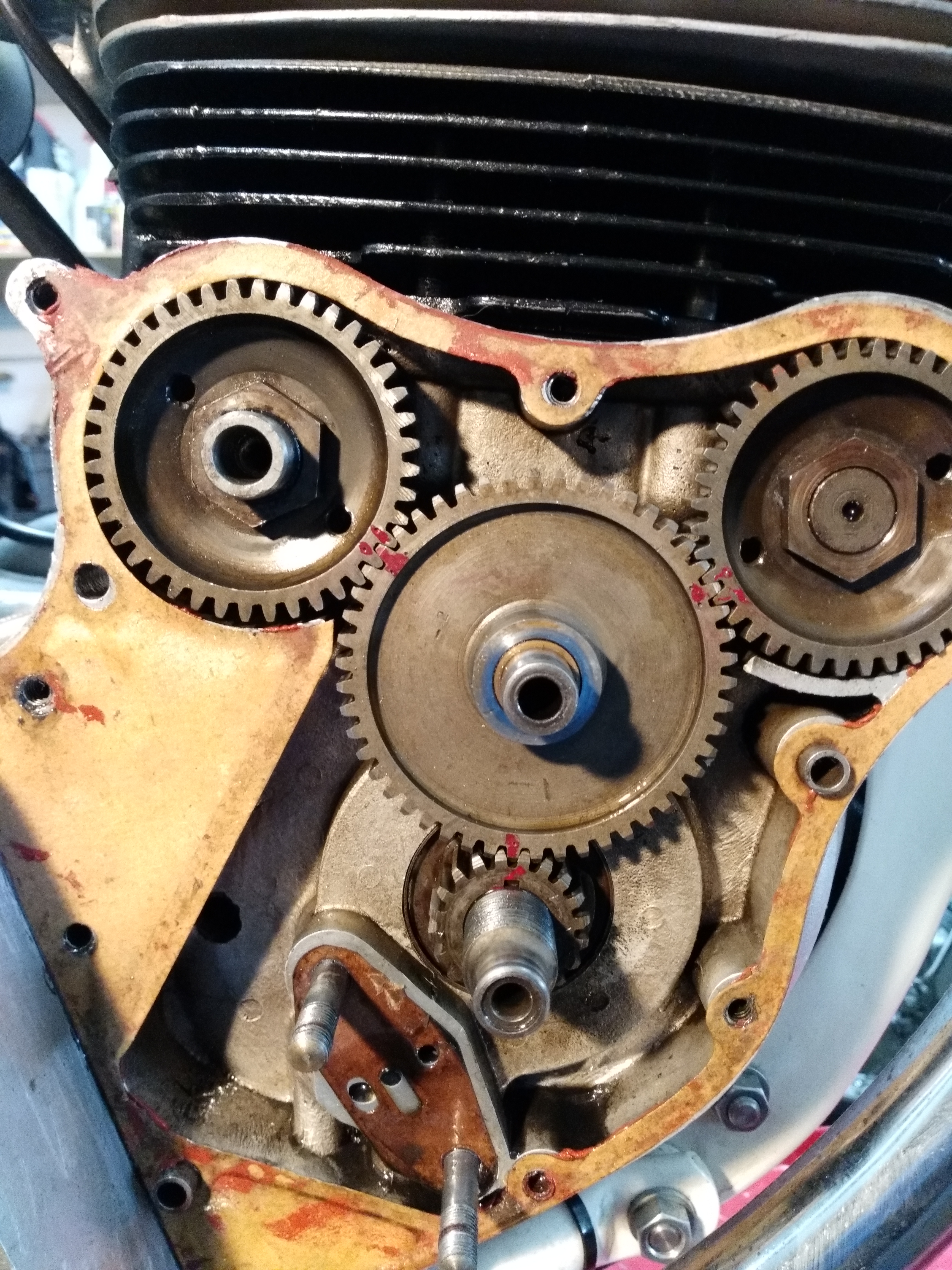 You can split the crankcases with the gearbox cluster in place. You can take it out as a unit by taking it out complete with the inner gearbox plate.I would recommend you to check all the bushes  and bearings while you´re  at it. Especially the layhsaft bush is known for spinning in its housing. In my case a friend made an oversized one for me on his lathe.

Reinstalling the gearbox as a unit is impossible in my opinion. Aligning the shafts and the gearchange mechanism does not work with the inner plate in place.

As Uli says above for timing marks & see attached

As for taking the cases apart, it makes sense to dismantle the gearbox first.

On engines before 106838, the layshaft bush is not pegged to prevent rotation. Its best replaced by a new one from the NOC that can be pegged - see photo. You may need to carry out rectification work as Uli outlines above if the original bush has spun in the housing.

Very reassuring my memory about the key way is correct Andy and Ulrich, age hasn’t overcome me yet!

Thanks for the info Nick, as the bike ran ok I thought the only thing I can do is apply paint to the gears and put my own mark, as you say, why they didn't put a mark on the half time pinion is a mystery, very strange. My concern was the small linear mark, should I be using it or not!!

Thanks Ulrich, I see from your photo that the intermediate gear dot lines up with the keyway on the crankshaft, mine doesn't but the bike used to run ok!! the absence of a mark on the half time gear doesn't help, it's a strange one, it leaves you guessing that the crank is at TDC with everything stripped down.

Thanks Andy, I see from your drawing that the bottom dot on the intermediate gear lines up with the keyway on the crank, mine currently doesn't which leaves me a little puzzled as my bike ran ok!! I have bought three books and none of the clarifies the timing setup. I take it that the dot must line up with the keyway at TDC, is that correct?

Yes Howard, engine must be set at TDC .

Maybe your crankshaft pinion was fitted wrong way round so the mark is on the backside?

Get the correct puller for this pinion it sits very tight on the crankshaft.

Thanks again Ulrich, I have another pinion and there are no marks on either side, it would appear that the keyway on the crankshaft it used to align things up from what I am seeing. I could be that whoever worked on my engine in the past decided to advance the timing by dropping back one tooth on the half time pinion but that sound a bit drastic to me. As for the puller at £60+/- for a one time job seems a bit much but I am having trouble removing mine so I might have to bite the bullet as they say.

Hi Folks - remember that the idler gear has an odd number of teeth, so the timing marks will only line up when you set them!

Once you rotate the engine - even one turn - the marks will not line up again.

You can still check that all is well by looking at the cam wheels themselves, and ignore the middle gear. If you line up the two dots as shown in Uli's photo so that both camwheel marks point toward the centre of the idler gear and the keyway on the crank should be in line too.

See Uli's picture updated with 3 white lines, which intersect at the idler gear centre. Due to a slight tilt from the camera - in the photo its not dead centre, but it should be. 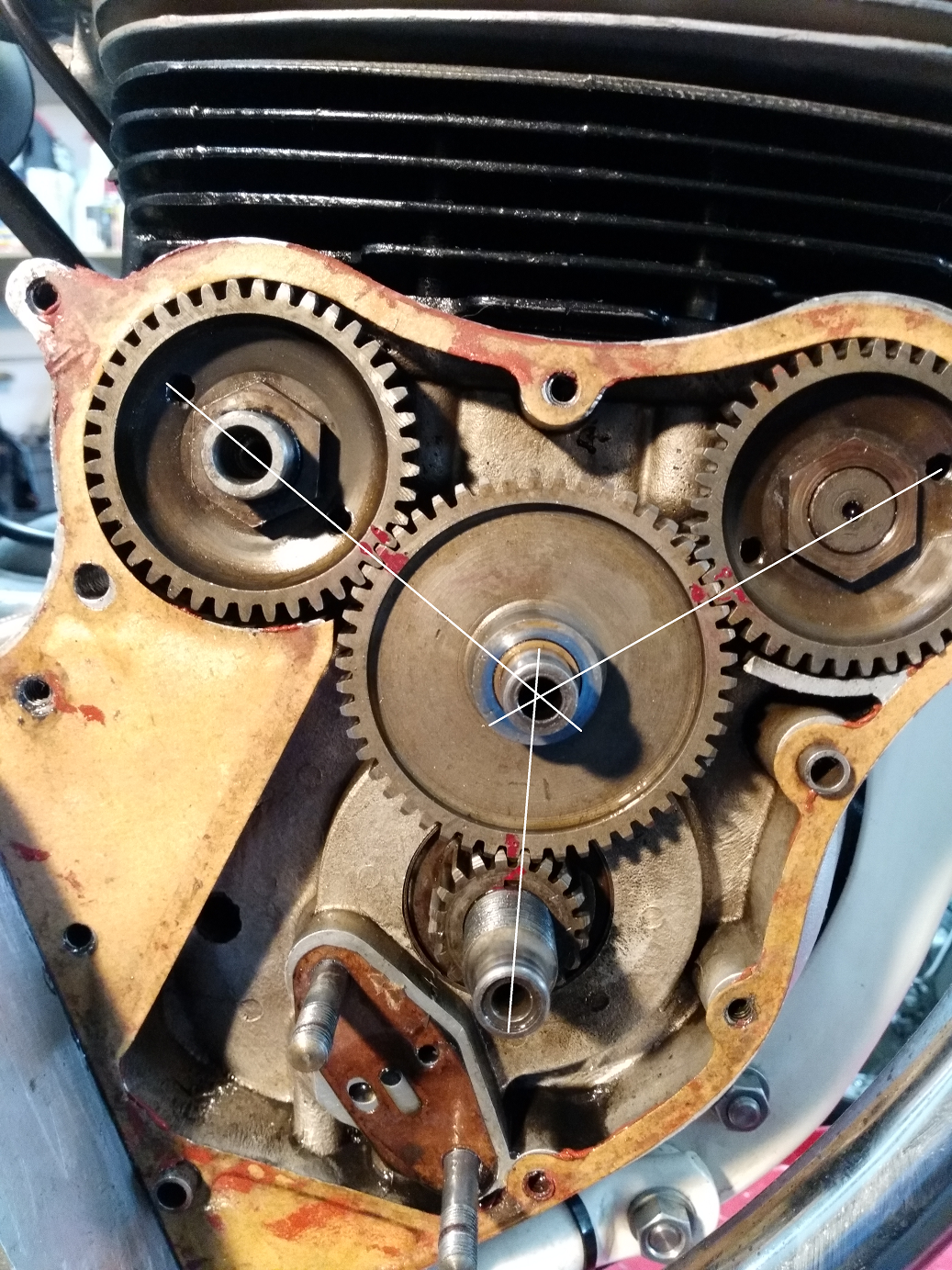 Hi Howard - there are NO timing marks on the small crankshaft pinion. It fits with the sloping side out - sharp edge in - as on Uli's photo. The keyway acts as your timing mark 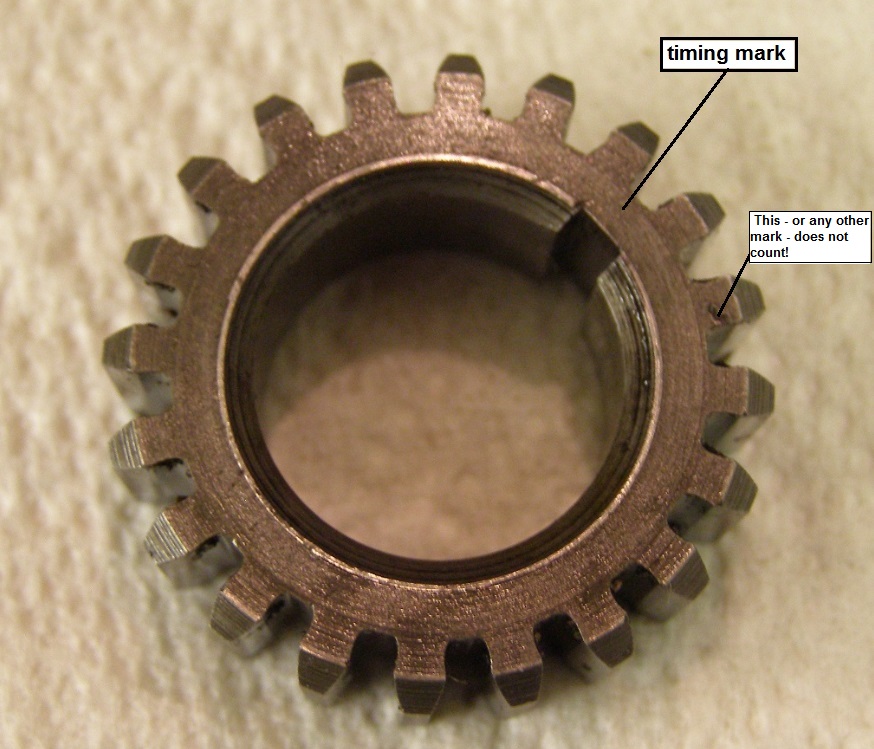 Thanks, I have gathered that from previous replies, but thanks all the same. My query was due to on stripping down my engine the bottom mark on the intermediate gear didn't line up with the pinion keyway!! Very strange,