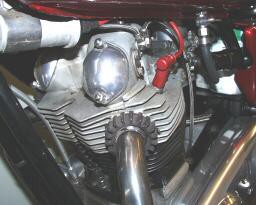 The Commando cylinder head can be distinguished from the earlier Heavy Twin head by its larger hemisphere which is offset to the cylinder bore and its 1½" inlet valves instead of the 1.406" valves on the 500cc and 650cc machines.

The rocker oil feeds go in at the sides of the rocker boxes, midway between the rocker shaft retaining plates, as the holes on top of the boxes are used to attach the head steady instead of the oil feeds.

The Commando head also has slightly different centres for the four bolts adjacent to the spark plugs, so that it is necessary to 'pull' the holes to fit on a 500cc or 650cc barrel. I have seen this done once, but it can only be described as a bodge.

Commando cylinder heads were not stamped RH1 from the beginning, and it would have been after 1972 when they started to make so many variants, which were as follows:-

The 750 and 850 heads are not easily interchangeable; they have different bolt patterns.

I, and other racers (Todd Henning #454 for one), like small port heads for their flexibility and flow speed. Perhaps the easiest way is to port the 850 head and manifolds to 32mm, making a nice smoooth taper from the manifold surface to the valve guide area, similar to a Combat design.

Combat head with no identifier

My Combat head has no RH identifier at all, yet all the evidence points to it being original to the machine.