Does anyone know, where I could purchase a rear mudguard and stays for a 1955 ES2 - new or second hand, or anyone who would be able to advise? Also I am after a rear number plate which I am struggling to find .

Rather a rare item

These are very difficult to obtain as they were only used for about 3 years on the single downtube swinging are frames.  NOC had some made a few years ago but these must have all been sold as there is none shown in the NOC shop.  They are the same as the single downtube swinging arm frame on the Model 7.  They do turn up occasionally as I found one at Banbury last summer.  The rear BSA mudguards from the mid 1950's look similar and it may be possible to adapt one.

Of interest, there are two styles which are fitted to these models and have different cross sections.  The one on my ES2 has a "U" section with vertical sides; the other type is more of a "C" section, but I've never fitted one of these on my 1955 ES2.  I've attached some photos to show the "U" type (it is only a green undercoat, before being sprayed!).

Good luck with the search

.....this is the same. Pretty pricey but not easy to find. # plate more common.

Philip Many thanks for the…

Many thanks for the advise, I've been looking for quite sometime now without any luck, but having those pictures should be quite helpful, as I now know what i'm looking for. One other item i'm struggling to find, is the rear chain adjusters ,do you happen to know if they are available anywhere, as I cant even find a picture .Many thanks Darren

Hi Michael I've had a look…

I've had a look at that website and as you say looks pretty much the same.

I'll keep that as a back up plan if all else fails considering the price. 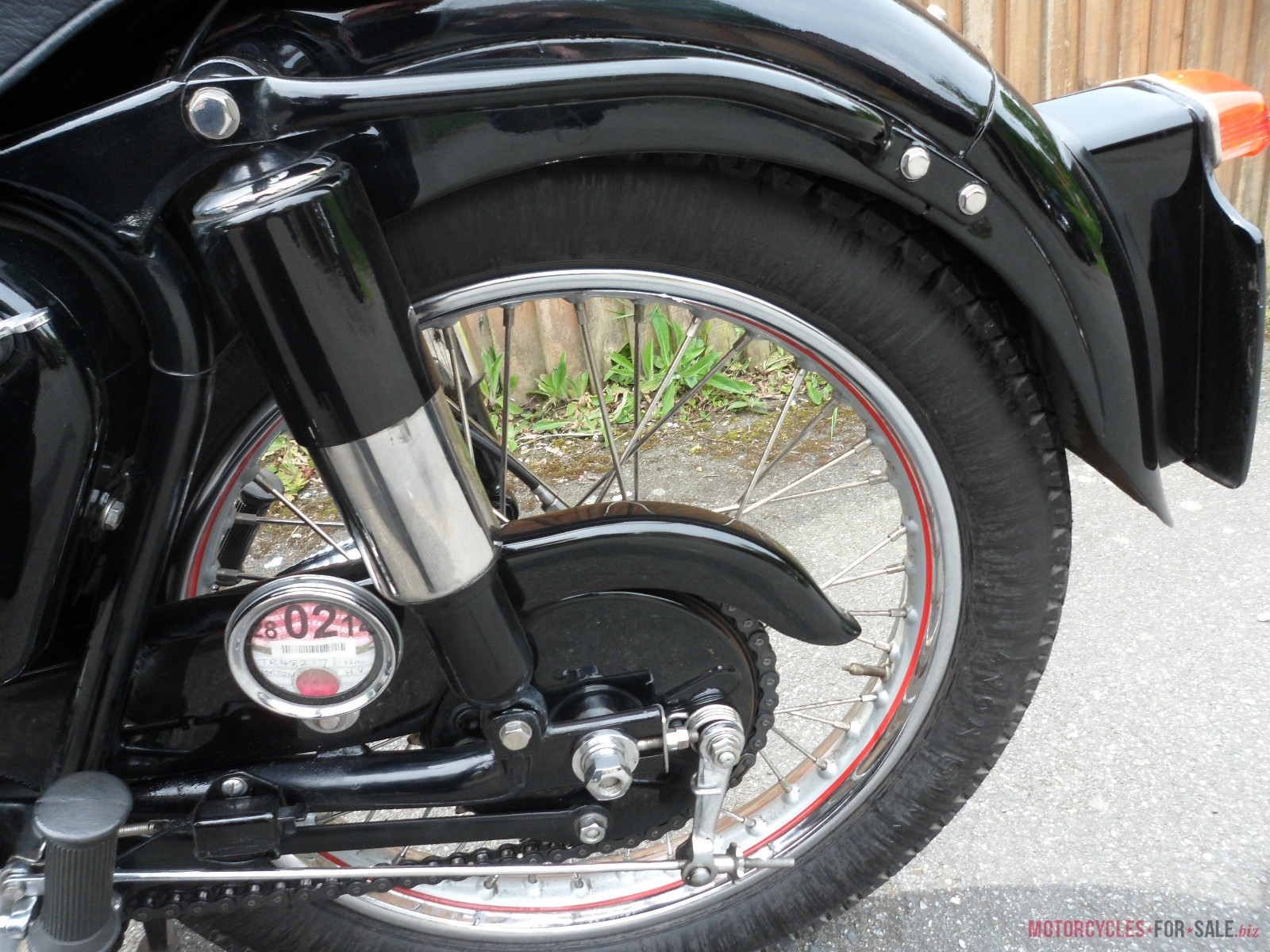 I would suggest that the…

Thanks for that advice ,I…

Thanks for that advice ,I can see what you mean now having had another look at the pictures.

The correct mudguard for the 1955 ES2 / Model 7 is always a matter of debate because of the two (maybe more) styles that were used on the single downtube swinging arm models.  This is why I was careful to point out that at least two types were used.

I bought my 1955 ES2 in 1970, when it was just 15 years old.  It had the original mudguards fitted, but they had been modified by the previous owners to ride around the fields.  They had cut off the front mudguard each side of the forks; the rear mudguard had been cut near the hinge, but they had kindly kept the pieces.

Since then, over the last 40 years I've managed to buy two more of these mudguards for my Model 7 and other ES2 and they are a perfect fit, with all of the mounting holes in the correct place.  I also managed to contact the first owner who sent me a photo of when he had the ES2 as a new machine, and the mudguard looks the same as when I bought it.  There are no indentations for the Armstrong shock absorbers on the style in my photograph.  You'll have to draw your own conclusions as to what is correct.

With regard to the rear wheel adjusters; these are another rare item to find.  In the end my brother helped out by making me a pair, see the attached photo.  It might be worth checking Norvil's spares as they have one listed, but there is no photo to confirm this.

Best of luck with your searches.

I had the same problem trying to find adjusters,. In the end I sent one of the existing (with stripped threads) to:

Who made an excellent pair of new ones for (from memory) about £16 a couple of years ago.

For what it's worth my '55 ES2 has the deep valanced rear mudguard with the indents for the shocks.

Many thanks Philip. appreciate all your help.

I read somewhere that the…

I read somewhere that the wideline rear is close to the pre featherbed rear mudguard, those are available from India.

Thanks Dan i'll have a look…

Thanks Dan i'll have a look at them.

This is an interesting read …

This is an interesting read

I have used one of the Indian copies for my 1956 ES2 project. It came with a poorly made hinge as for earlier models but was large enough to allow me to cut off the hinge part and remake the joint as a push together and bolt up connection. The mudguard itself is slightly wider than the genuine but does go in the frame. Its quite a lot of work and depending on your cutting and welding abilities can produce an acceptable alternative at quite a low cost, I paid something like £90 for the guard, and later some import duty of £30 ( which they don't tell you about until after it arrives in this country).

I was able to buy a new copy of the number plate/ rearlamp mounting on ebay for about £30. I have an old original which is serviceable but not perfect which I could let you have if you are really desperate.

Hello Now if you go on to the website and typo in eBay.UK ES2 Mudguards  the site will take you these new ES2 Mudguards  and you will find they are the correct full valenced  with a lift up tale peace Some are in a Zinc base coat  others are in an oxide base coat  now some are in pairs with stays  some are singular like a rear on its own or a front on its own the prices are competitive So do give this a looking over before you buy, PS and these mudguards with fit the wideline twins from1955 onto 1959                             yours   Anna J

Hi Andrew Thanks for the…

Thanks for the information, I've had a good look at the Indian mudguards and  I think that's probably the way to go just a shame nobody in the UK are making them. Regarding the number plate, I would be interested in buying from you if possible, if you could text me a price including postage that would be good .Many thanks Darren (07971786258)

Hello again I don't have a mobile phone so can't text you I tried calling the number you gave but couldn't get through.I think I paid about £20 for the numberplate so you can have it for that if you like.

Hi  Yes I would be happy to…

Yes I would be happy to purchase the number plate off you for £20. My Email is wyegarthelectrical@gmail.com