I was very interested to see Phil Hannam's comment on the predicted life of a Commando oil pump. He makes the good point that a Dominator pump was designed for 100,000 miles but the Commando one is running at twice the speed and thus at 50,000 miles might be nearing its end?

My thoughts were that the Commando has the benefit of an efficient oil filter and coupled with frequent oil changes the pump might have a much cleaner and life enhancing environment?

Wet sumping is one symptom of increased clearance within the pump. But if the oil return shows a healthy flow this means that all that oil was going around the engine, so is that a good indicator?

Is there a blanking plug on the engine where a temporary pressure gauge could be fitted to see what pressures are when hot and when cold?

I've never heard of a Commando oil pump needing replacement in an engine which had no other mechanical problems....which might mean that 50,000 miles is closer to the mark as few seem to have made 100,000 miles on original cams and followers.

Personally, I always replace the oil pump if rebuilding, and the later generation of Andover pumps are an improvement.

Would a double banjo off the rocker feed be the easiest place to tap in a gauge ?

When the DPO leaves bits of…

When the DPO leaves bits of piston rings in the sump it has an adverse effect on pump life ! ( obviously) 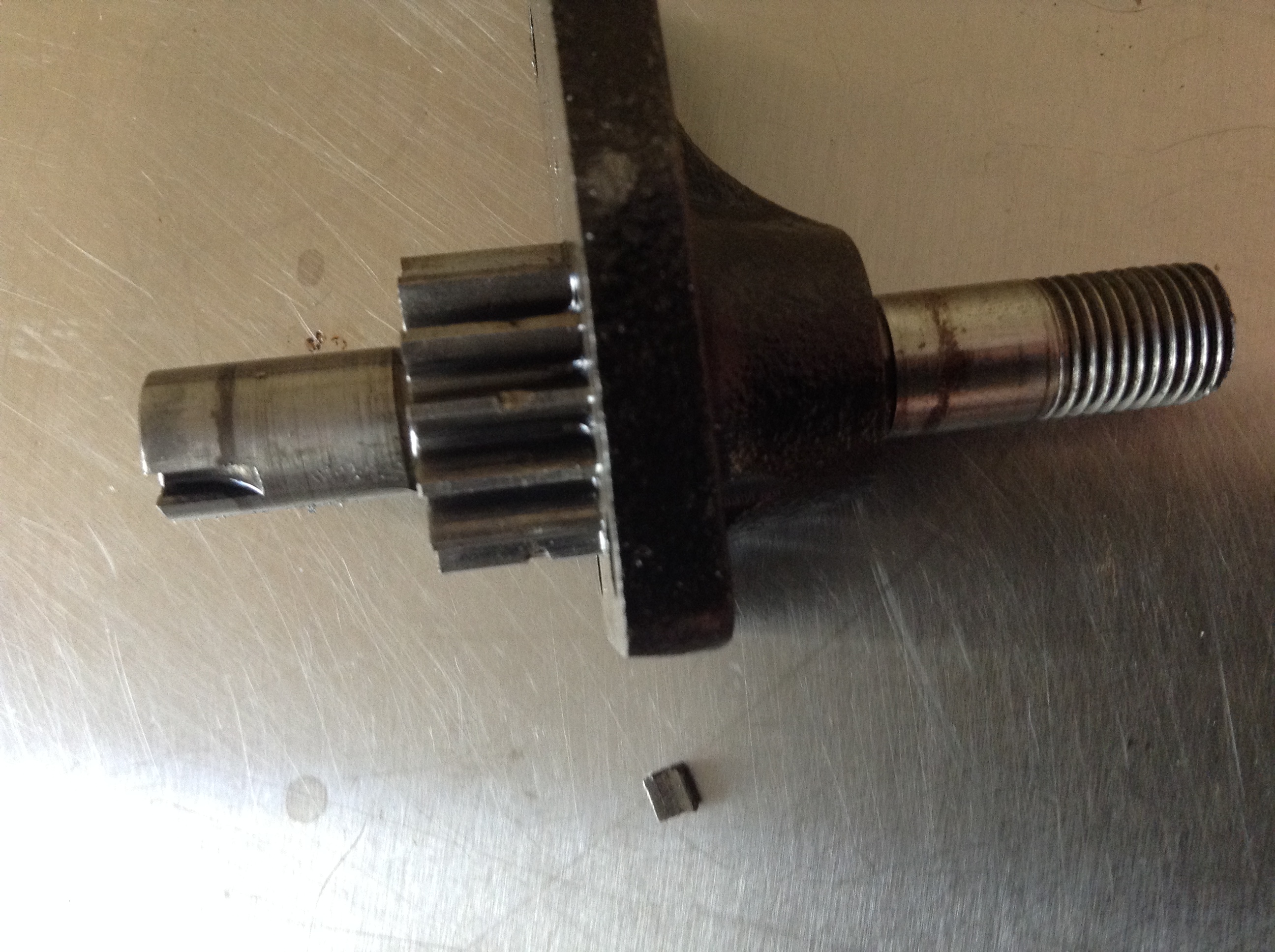 And this bit - 3/8” long and still managed to negotiate the three 90 degree bends on the passage from the sump to the pump - just lying in the oilway feeding itself to the scavenge gears . 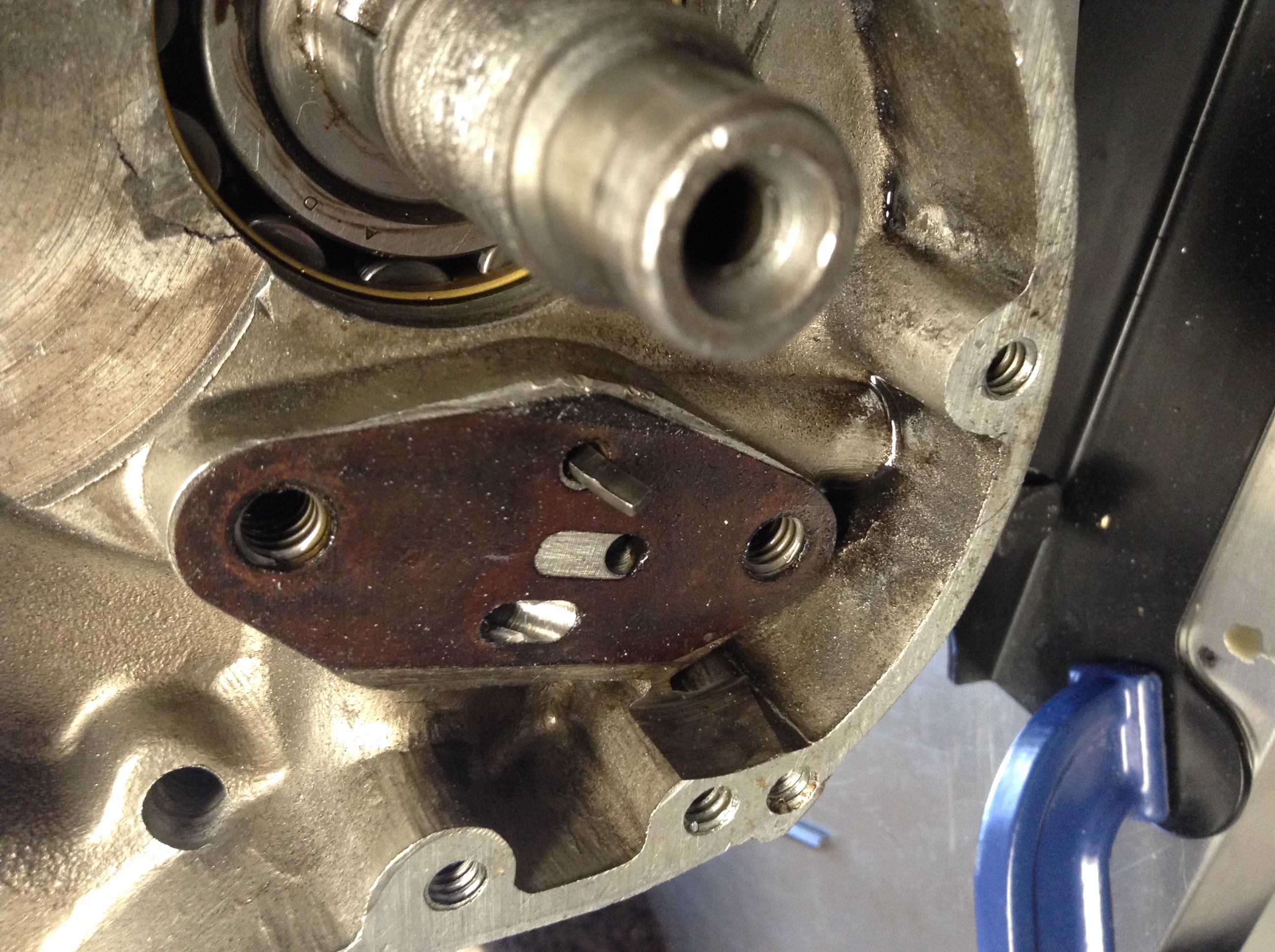 Everyone posting on this thread has brought up good points relevant to the subject. Here are a couple more to add some light where there is not good clarity.

The addition of a cartridge filter in the oil return system does bring a huge benefit to most of the big twin engines and undoubtably increases the life of many of the bottom end components. However, that oil pump sucks up all the junk that drops into the sump and then swills much of it around the pump with very little in the way of fine filtering. Most cartridge filters appear in the circuit after the oil pump and hence fail to stop any of the really destructive matter that has dropped off camshafts, followers and other hardened surfaces. Quite a few Commando engines were built without even a course sump filter......utter design madness!!!

Due to the double speed gearing, most Commando pumps (and later Dominator) have an excess output of around 30%.  Consequently, even when very badly worn these will still chuck out a respectable flow of oil. The down side being heavy wet-sumping. This over-oiling capacity was realized right from the advent of the bigger engines when the conrods with oil spray holes in the top shoulders turned up. These led to smoking pistons which were in turn cured by fitting special oil rings.

When the Commando engine arrived a clever little mod was made to divert a good proportion of the excess oil feed back into the feed line itself. This had several benefits. First the feed oil became pre-warmed quickly which helped it to get around the engine faster. Secondly, it stopped the excess oil pressure filling up the the timing cover on cold starts and also the oil pump and timing cover seals from getting over-stressed.

The early Commando oil pumps are some of the worst made I have ever come across. The mating surfaces generally only display a single pass grind and consequently have a very rough finish, the drive and idle shafts are usually not perpendicular to the end plates so the gears are crooked and it is not unusual to find the internal chambers badly finished.

The new Andover Norton (wash my mouth out) pumps are far superior in terms of build materials and quality. Check out the attached photos for some oil pump horrors.

What is the story about that "bent gear tooth"?

I would think that the gears would be jammed and the whole gear train would be impossible to turn???

All of my collection of oil pumps have come off running engines. I usually get donated them in exchange for a reconditioned pump that does not wet sump so quickly. The photographs show the damage caused to the driven/idle gears by either junk material or a bent tooth. The bad news here being that the rubbish gets ground up into a fine paste which can pass through the coarse filters and back through the engine. Where it is not going to be kind to big ends, camshafts and then the oil pump again.   Damage such as this is a good reason to fit an oil filter kit on any Norton twin. Also note the wear on the drive worm wear caused when the internal gears were jammed by the rubbish.

Check out that drive-shaft end plate. This is not an isolated incidence. I have come across dozens of Commando oil pumps with end plates and timing case mating faces that look like this. There is no way they can be oil tight.

Not shown in the above photo…

Not shown in the above photo of my pump - the one of the scavenge gears - is yet another bit of ring that was actually forge welded between the gear teeth from the pressure of being squeezed between the gear sets . The pump could not be turned past this point by hand when removed yet the mechanical advantage gained through its drive train allowed it to still turn when in place. As Phil noted about his pumps , this was from a running engine.

Could some of these be Wassell pumps from the late 1970s / Early 1980s ? I've seen one or two of those that were as rough as a badger's arse ! They were however all that we could get at one time.

A good reason to fit an oil…

"Damage like this is a good reason to fit an oil filter kit to a Norton"  - a sump filter as fitted to the Dominator, as well as the cartridge oil filter behind the gearbox.  When did the Commando lose the sump filter?

I would be interested to know if the recirculating oil timing cover can be replicated on an early cover.

The gauze strainer was deleted on the 1972 200000 series engines (including the Combat) and didn't reappear on the '73 750s either, although other aspects were improved...Basically 750s with the rear breather (the wet-sump specials)