I have installed an RGM belt drive kit on my 1956 Dominator 99 which has a G8 laydown gearbox and cannot get adequate push rod movement to actuate the clutch efficiently. I have exhausted all the usual setting procedures at the clutch and the bell crank lever in the gearbox. The clutch kit includes a  modified Commando clutch.

I have to say that Dave Middlehurst the NOC Heavy Twins technical adviser has been very helpful and patient with my queries and has suggested that the diaphragm should be concave when the clutch is engaged and convex when disengaged. Mine is permanently convex. However, irrespective as to where the diaphragm is it would appear that axial movement of the push rod is insufficient . I have checked and rechecked the inner gearbox scroll and bell crank lever position.

The axial movement at the spring diaphragm boss ( when the adjusting screw is touching the push rod ) is 0.044” . Obviously not enough.

Am I have a ‘ senior moment ‘ here or is there an another angle on this ?

I await your wisdom with bated breath !

The Commando clutch needs a…

The Commando clutch needs a lot of lift and the worm on the laydown (and earlier) boxes is very 'slow' and requires a lot of lever travel. AMC boxes have more lift for a given amount of cable movement. Having large centres between lever pivot and cable nipple will help but will make the clutch heavier.

I have seen it done with a pivoting lever hidden under the fuel tank. Can the 'Easy-Pull' clutch leverage adapters be used in either direction...with the possibility of giving more lift at the expense of a heavier action ?

In the AMC gearbox the…

In the AMC gearbox the clutch operating lever is different on heavy twins and Commando, thus giving different lift. Don't remember how much lift you can get in a laydown gearbox. If it's enough for a Commando clutch,  it might be possible to change the clutch lever as Richard suggested.

I've got a diaphragm clutch…

I've got a diaphragm clutch and lay down 'box on my ES2. No problem with lift, it works like a dream.

My Belt Drive Conversion continues to be a wonderful purchase. I have now covered 5000 miles using it and gave it a good check-over last month. The gearbox mainshaft nut was a fraction slack but everything else was good. The clutch lever action is so light compared to the previous Gorilla grabbing and cable breaking set-up.

The attachments show the state of the belt after a year of hard use. It had not been rubbing on the end plates or catching the alternator wires as I originally feared might happen. The only other real problem I noticed being the puddle of oil which had slipped past the crankshaft seal. A couple of hours saw this seal replaced and the gearbox nut re-torqued and tab-locked.

I have not come across the problem that George is having with his Belt Drive Clutch. I know several owners with Lay Down boxes and belt drives. All share my experience of it being a good purchase. The only change I had to make when fitting my conversion was to shorten the pushrod by about 8mm. I am wondering if there is an issue with George's clutch basket. Perhaps it has the wrong pressure plate or an extra plate by mistake.

Thank you for the replies.

Philip, I assume that your gearbox is not a laydown type with the clutch scroll / bell crank operating mechanism. I am coming to the conclusion that irrespective of the  thickness of the clutch plates and compression plate, the amount of maximum  axial movement that I can obtain of 0.044” is insufficient to disengage the commando clutch effectively. I do not wish to go down the path of changing the clutch lever. I am not sure if the upper bell crank lever arm would be able to move much higher utilising the extra pull of a different  clutch lever with an increased  pivot centre.

Despite what others may claim, my experience in trying to fit a RGM Belt Drive to a 1956 Dommie 99 was exactly as you described. The Laydown gearbox clutch activating worm, particularly in conjunction with original 7/8" pivot levers, is simply insufficient to fully disengage the diaphragm clutch and that having spent considerable time optimising the stack height to achieve the most efficient operation.

In standard form with the arm in the most efficient position the worm gear achieves only 23º of rotary movement which equated in my case to just over 60 thou of linear movement on the clutch activating shaft, less than half of that possible with an AMC gearbox. 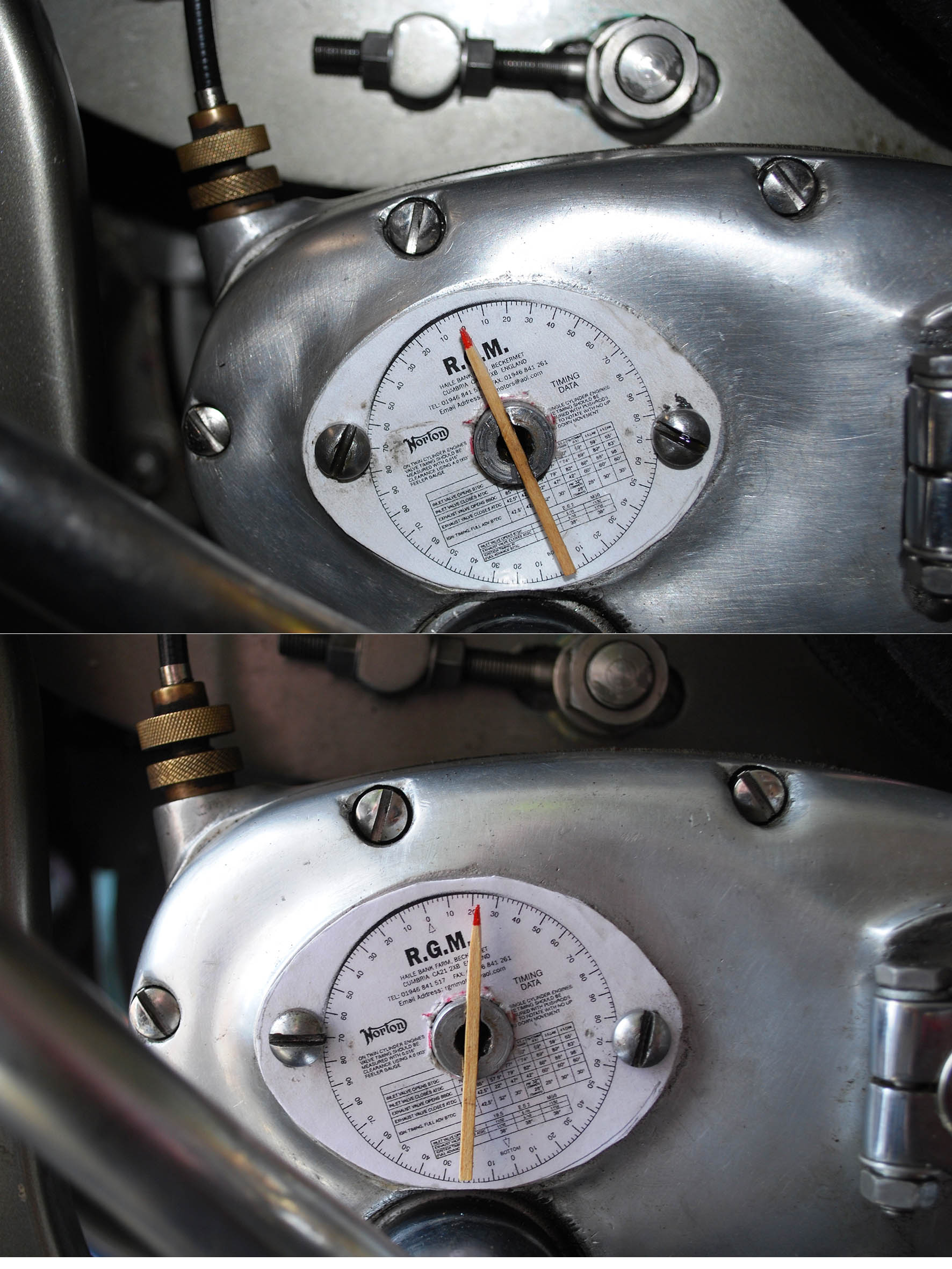 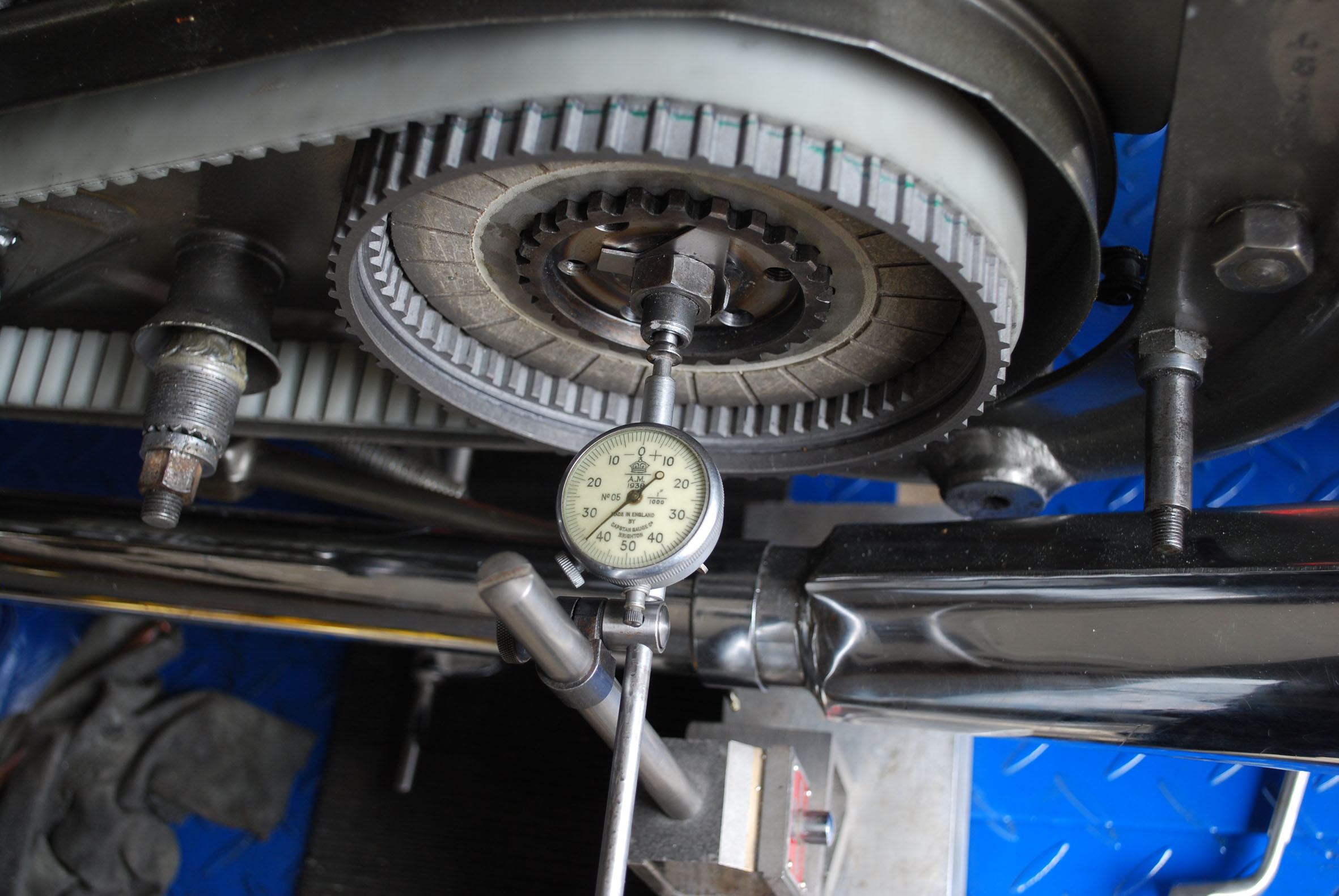 I did experiment with larger pivot levers and even fabricated a slave arm in the clutch cabling to gear up the movement, as shown below.  These achieved the desired effect but the load on the clutch lever was too much for comfort and the whole belt drive concept on the Dommie was scrapped.  It was subsequently installed later in my 19S with its AMC box and gives delightfully efficient operation.   The Dommie reverted to standard format and with cheap 1/2" foam strip now replacing the standard primary seal, oil leaks are a thing of the past; probably the prime reason for going down the belt drive route. 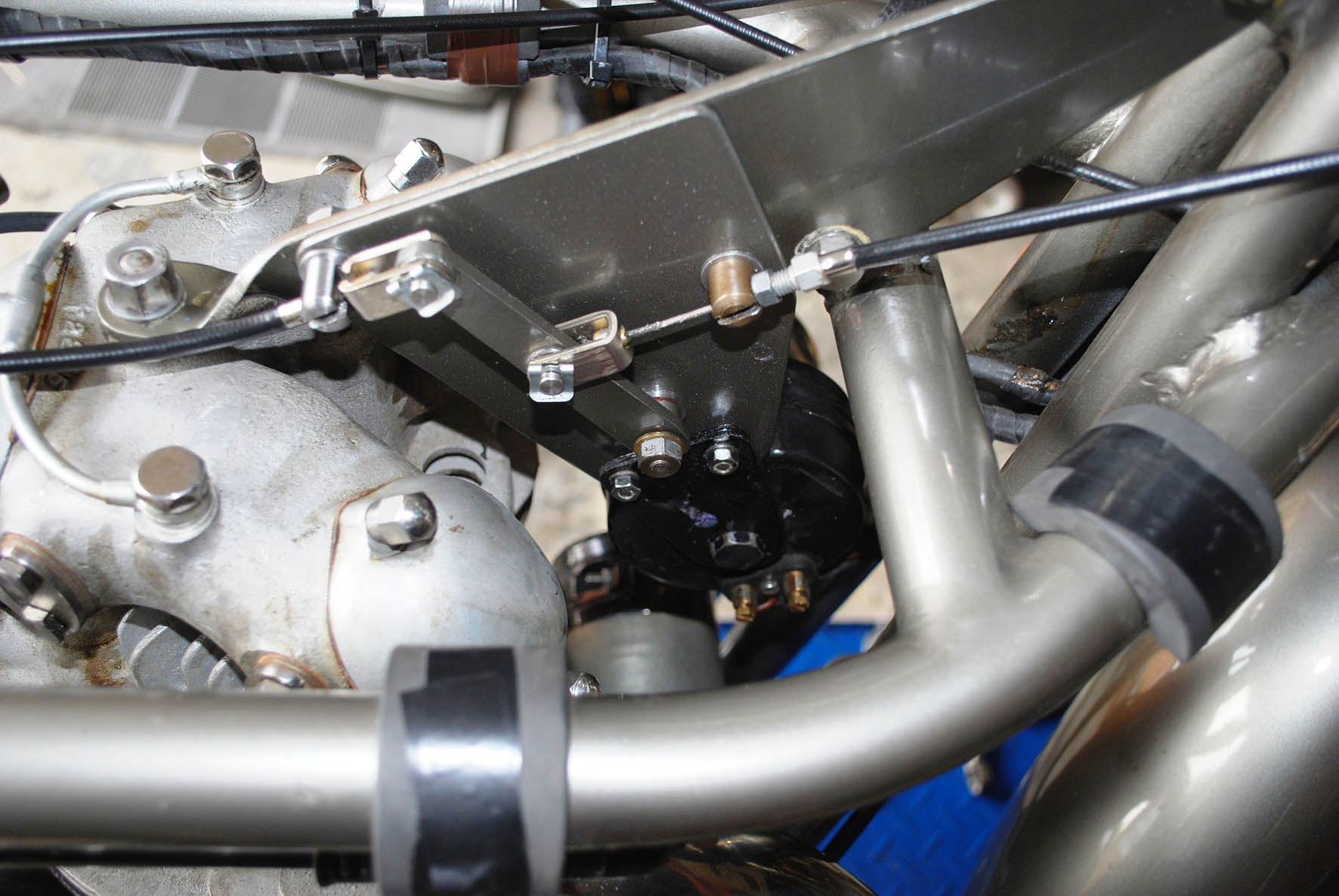 Further to my earlier queries and in particular the 0.044” axial movement of the push rod, has anybody out there measured the push rod movement at the clutch on their laydown box ? A long shot I know !

Thank you Peter for your timely comments and photos . It was a relief to confirm that I was not losing my sanity !

Like you , I may go back and fit an original Norton clutch ( and chain ) as  I understand that they are available although I do like the idea of a belt drive. The clutch that I removed was an ANC unit fitted by a p/o but was in a poor state. By going to a belt drive I was hoping to kill two birds with one stone ! The other alternative is to put the AMC clutch back in with new plates etc.

Further to my previous comments I have decided to fit a Bob Newby belt drive and clutch as it does not have the commando diaphragm spring plate which I found needed further axial movement of the push rod than was possible with the laydown box to operate succesfully. I will report back in due course.

hello, there is one thing missing  the clutch mushroom distance  you removed  personally I would not touch a Commando  diaphragm  clutch   if hell froze over, the best of all belt drives Clutches is a BoB Newby  by far,     but I feel your pain     yours  anna j

With a 1.1/16" pivot lever and the recommended 1/16" slack in the cable it's exactly .060" on my 1952 ES2 (laydown gearbox, worm drive). That's enough to free the clutch more or less completely, albeit with slight drag. I can easily get neutral from either 1st or 2nd at a standstill though.

Unlike Anna, I found the diaphragm clutch on my Commando superb, and with the AMC gearbox it gave the best change I've had on any bike. It has to be correctly set up though.

Further to my earlier comments I have now fitted a Bob Newby belt drive kit and it operates perfectly. It has a featherlight clutch action and is pared well with the short action ( 0.044”) of the push rod in the G8 laydown gearbox. The gearbox action whilst there is still room for improvement is much improved having now eliminated the previous clutch drag.

hello the original clutch set up right  and with a good Diamond chain  fitted there is nothing wrong with the Original set up  and I have light clutch action on both my bikes   both Bracebridge street built,   Yours   Anna J

1956 Dominator 99 clutch .An update. Further to my earlier comment I have now done approx., 100 miles after fitting the B/ N belt drive kit and there is a significant improvement in the laydown gear box performance. The initial 0.044” push rod movement has resulted in a 0.035” of actual clutch movement due to ensuring a slight clearance between the pushrod end and the central adjusting nut when the clutch is engaged. At last neutral is much easier to find. There is no apparent clutch drag.

However I do still have a problem with the gearbox which has nothing to do with the belt drive in that occasionally top gear refuses to engage resulting in a false neutral. I then have to re engage third and then go for fourth gear. Why is this happening ?

Also sometimes I have to rock the bike back and forth to engage first gear. There must be some wear in the gear box components causing the miss engagement . Any clues ?

If this was an AMC type gearbox I would be replacing the two springs that operate the gear selection via the gear change rachet. These springs have to be correctly formed for the rachet to operate properly. The cheap pattern versions available are almost always a waste of money. See attachment. The Laydown box might have a slightly different arrangement to select the gears.

Thanks for your response Philip to my gearbox query. My laydown box is a G8 and not an AMC .

Is it possible to replace the springs without removing the engine and gearbox if indeed they are the cause of the problem ?

George, I think you will find that your top gear selection problem is because the upper of the two selector pawls is not fully clicking into place when the carrier returns to its central position. When you lift the gear lever again the pawl clicks fully home. 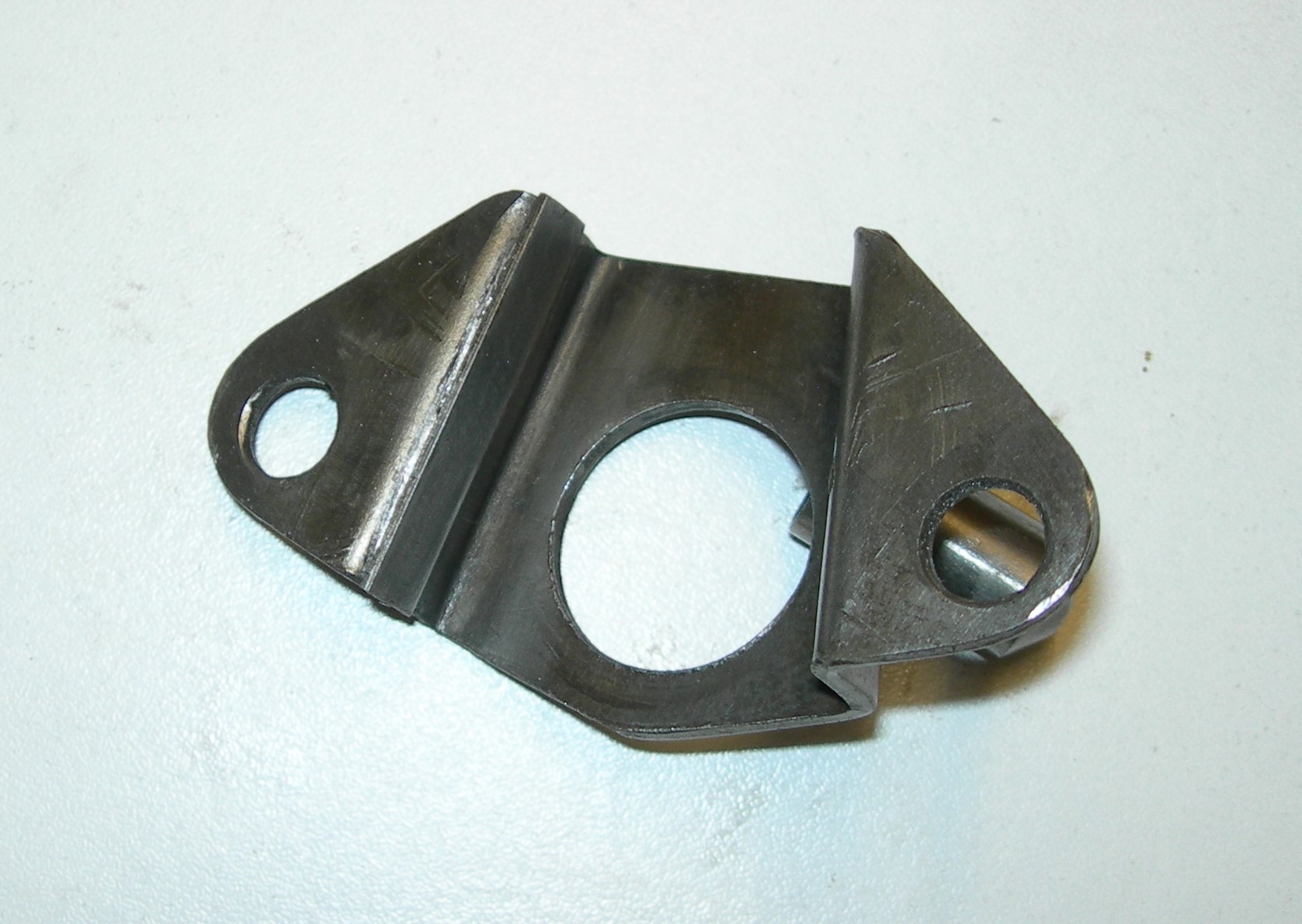 Yes, you can do all this, and most other gearbox work whilst still in the bike.

Thank you Peter. Although I have never fiddled with the internals of motorcycle gear boxes I will remove the front cover plate and check it out.

If you don't get the next gear,…

If you don't get the next gear, try giving the lever another nudge instead of going back to the previous ratio. On these boxes you can easily feel the engagement happening.

I improved the gear selection on my horizontal box by getting the positive stop ratchet pawls built up with wear braze.  There is less lost movement in the gear lever before a shift starts, so you have more chance of it being finished before you give up pushing on the lever....

On any Norton box, if it fails to give top gear, I would be checking the mainshaft end float.  If there is a lot of end floatt, it will make top gear selection less certain.  If too much, you will need a new thrust bearing, or a shim behind the old one.

Thanks Paul for your response. I have tried giving top gear another nudge but nothing happens and that is why I have to go back back into third and then into fourth. The inability to engage fourth gear is intermittent and sometimes it engages without any problems.

I have no problems changing into second or third.

George,  instead of changing back into third try, after you have engaged third initially, just gently lifting the gear lever upwards with your toe.  If then, when you select top it engages smoothly,  it will be the upper pawl not engaging in the ratchet plate as I described earlier.

Thanks for your kind words Paul, I was referring to both the pawl spring and then the return spring, both affect the selection.