No Engine numbers What could have happened.

The previous owner had this bike for over 20years and bought it for somebody in the Midlands.

The bike if registered with the DVLA but there seems to be some lost years.

Now here is the strange thing.

The bike has no engine number and its first registration for my V5 says first reg 1990 It does have the compliance plate still attached.

Does anybody know why it does not have an engine number.

The engine has been out of the bike because the pistons are 20tho over.

Could it have been a replacement engine. Who knows because it has no history for almost 20years prior to 1990.

If you have an engine with no number I would guess that the most likely reason is a replacement crankcase. Usually needed due to a con rod breaking and taking one or both halves of the crankcase with it.

New replacement crankcases were supplied unstamped. Usually the dealers stamped them if it was warranty work, but private owner probably didn't bother.

Are the cases the 1971 type with camshaft breather ? Lots have been rebuilt with later cases.

The 1990 registration date may mean that it was exported and then reimported which would explain the gap. There was a time when you could obtain the full vehicle history from DVLA but sadly you cannot anymore. What does the V5 say exactly?

Not sure if the bike was exported. The bike was despatched to Corbetts of New Cross SE London in September 1971. I would imagine that it stayed in the UK. But not impossible that it was exported. 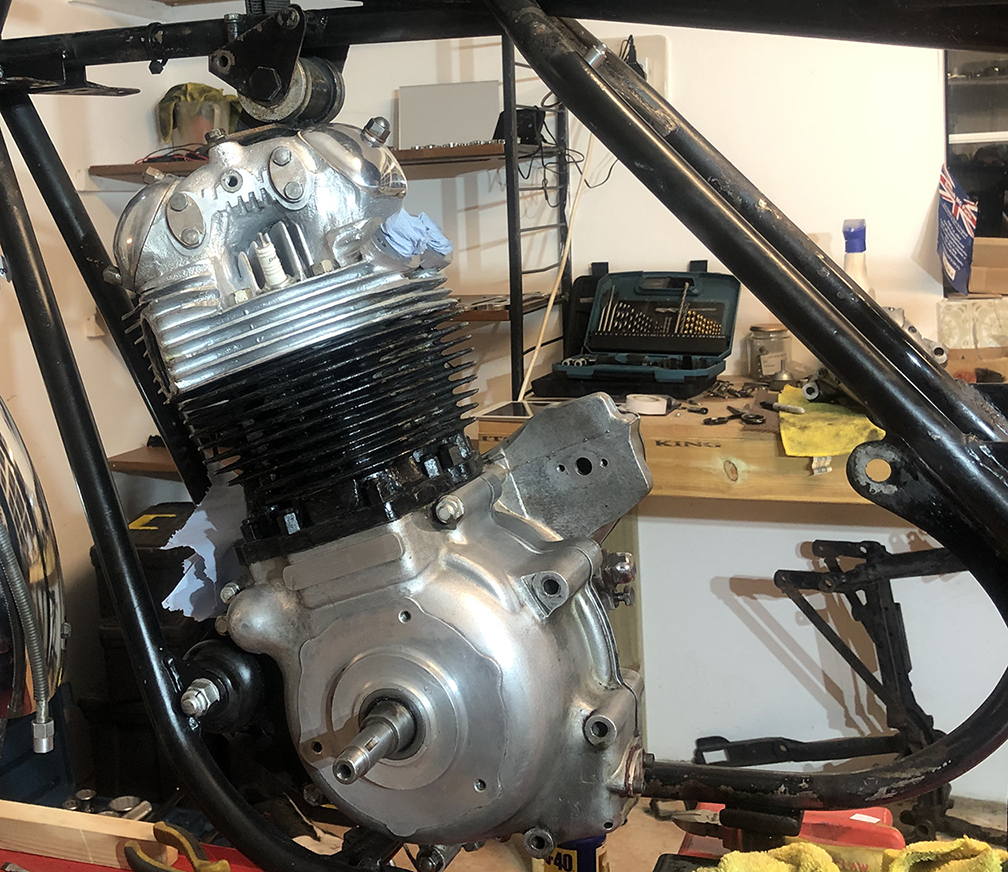 DVLA has a procedure for…

DVLA has a procedure for changing V5C if a new engine is fitted.  But their web site does not say where a new number comes from.  No doubt you have no receipt from the engine supplier.  If a garage had stamped it and then sold it you you with a receipt on headed paper showing whatever number they had chosen, you could send that the DVLA and they'd update your number.  You'd presumably be in trouble if you were to stamp the number from your current V5C on an unstamped engine.  You could write to them and ask.  It's all rather ridiculous because machines do not have unique characteristics like finger prints or DNA codes, so a number stamp is not really evidence of anything whatsoever.  And before the advent of modern VIN numbers, the same engine number will appear on many machines - Norton, Matchless, AJS, BSA etc etc, - indeed potentially for every bike and car maker on the planet!

Hi David Thanks for the…

Thanks for the reply.

It does not bother me with no Engine number. Its a replacement in the day. The original person who blew the motor did not update paperwork in the 90s Or notify DVLA. It is what it is.

Going down the DVLA route can be like pulling teeth. I had an issue with my 1959 vespa Years back when you used to have MOTs The Tester wrote the wrong chassis number down. DVLA says records don't match. The hassle I had then was it had to be checked by DLVA the number was so fine you could hardly see it. It had to be checked by DVLA. They could not find or see the number clearly.    I had to have it looked over again by some dim wit at DVLA more head scratching. This went on for months. They just did not know what to do. In the End they canceled the original age plate. I loved this one and issued me another. Not to my liking.

There was scheme for US…

There was scheme for US military serving in the UK which allowed them to buy a bike from a UK dealer and after the end of their UK posting they would get the bike sent back to the US. So a UK dealer in the record and then being reimported from the US is not as rare as you would think.

I would also not go near the DVLA, it would be like prodding a hornets nest.

My 72 still has the cover on the back of the timing side where the points used to be fitted. I think this was done away with in 73.

I’m sure the more knowledgeable would know!

That is a late 72 or a 73, it still has the 72 breather outlet on the rear with blanking plate and the cover over the old points is now part of the casting which is a mid 72 mod, 73 looks the same. It will also not have the large sump and filter, just the drain with magnet so no protection for the return side of the pump from the engine blow up remains. 74 was 850 only and the large sump and filter returned to the 73 850 too but not to the 750 unless it was a 750 short stroke which used 850 cases.

...why not stamp the motor accordingly?  DVLA issued the V5 with the engine number listed?, they don't know if it was stamped or not.  Am I missing something  here?

Stephen, it does indeed look as if you've got an engine that has been rebuilt with the last 750 pattern case. They're the strongest type but as has been mentioned, they lack the sump strainer....Have you made sure that the oil return pick-up has been modified ? With the breather moved to the timing cover, these engines can 'wet sump' in the true sense of the term (i.e. not when standing but by failing to scavenge at high revs). With the original breather fitment, it has been suggested that oil was pumped up the breather back to the tank which just about worked for moderate road use.

My preference is not to stamp replacement case...It never looks 'right' and can cause more questions than the milled surface of new cases, added to which, historically it's confusing the issue as the number you have is presumably one that belongs on the front curved surface of a timed breather engine.

There is no legal requirement to have an engine number.

Thanks for all the info…

Thanks for all the info Richard

The cases have not been split yet. They are down at my local machine shop.

i am pretty sure it has not had the oil scavenge upgrade. I can tell you for sure it wet sumps very quickly while in storage.

i think it would be a good idea to get this machined when the cases are split.

Nothing springs to mind beyond the usual mechanical checks...I assume that whoever repositioned the breather ensured that the timing chest can communicate properly with the crankcase.

..and whilst it's not internal, on these engines especially I would fit a late-type cartridge oil filter while everything is apart.

Thanks Richard i was going…

i was going to do that oil upgrade.

Fix to the lack of sump…