Hello  - Has anyone ever made a twin carburetor manifold - and twin carburettor set up on the Navigator to get a bit of extra 'oomph' out of your engine  if so, please let us all know  what your experiences were -  and whether there was any improvements in engine output? your Anna J

No experience at all with these but a quick look at a pic of the manifold shows a potential problem in the narrow centre distance between the ports and angle of the ports themselves.

If you could straighten them close to parallel by removing or adding material or inserts it could be viable. A suitable carb with a bore matching the port size would be the first place to start. Twin Amals side by side are limited by the flange width but new flanges or rubber sleeves could be fabricated.

Good idea and someone has probably done it but alot of work needed to keep it neat and compact like a stock twin carb setup. Maybe a bigger single carb and attention to the valves and seats, blended port pockets and matching everything up to the carb and manifold a more effective mod. Normal hot rodding stuff but the rest of the engine needs to be in top condition.

There is a photo in one of…

There is a photo in one of the various Norton books of a Navigator stripped and seriously prepared for racing. I can't find it on my bookshelf at present but it might give some ideas. Edit...I think it was actually a Jubilee so.maybe not relevant..I still can't find it...

Having looked at this…

Having looked at this several times over the years and the other issue that has always put me off is the main U shaped vertical frame member behind the engine.  It is very close to the heads and offers little or no clearance to fit twin carbs on the Lightweight twins.    Looking back there are various strands on this and other tuning ideas which refer to gas flow limitations imposed by the angle of the valves and original valve springs - I would also be nervous about weaknesses in the original piston design and cam followers.   But with ingenuity (and money!) these could be addressed and the bottom end is bullet proof.   Those issues aside I have always felt that the Lightweight engines offer untapped potential limited by the available money and management motivation in the late 50s and early 60s.   Surely a mildly tuned and improved, twin carb Navigator should have been good for the ton?!   Yours with rose tinted specs....  Nick

I spoke to Les Emery about…

I spoke to Les Emery about the Jubilee racer they built, he told me they reversed the heads so the exhaust ports became the inlets to give the necessary space for a twin carb, a lot of work and apparently it wasn’t very successful!

I think the conclusion was the best improvement Is better balancing of the bottom end with  better pistons (I think they used vertex, but no idea off what), and Kawasaki valve springs to reduce valve bounce, they got it to rev to 13,000rpm ...... gulp!  No idea for how long though but they did clock it at over 100mph.

Allegedly, fitting jubilee cams to the Navigator makes it go better but we need the evidence!

Les Emery of Norvil and a chap called Mark Capewell invested time & money in making a Jubilee go faster. As Dan says, they tried reversing the heads intially for a twin carb setup - but think they finally settled on a larger single carb & stronger valve springs. The Jubilee makes all its power at the top end & tails off (@ 15 or so bhp) with valve bounce around 7,500rpm.

So, if you can get it to rev faster - it will produce more power - hence the stronger valves springs. I heard they even packed them out with an extra heat washer, and the revs went up & up.

1) The included angles of the valves - a historic part of the engines design, as originally it was to be a one-piece head and barrel (aircraft engine style), and the valve angle used allowed the valves to be inserted from up the barrel.

2) Weight of the valve gear - a result of introducing a joint at the cylinder head (as motorcyclists like nothing better to do on a Sunday than de-coking the heads off their bikes - attr. to Donald Heather) and introducing stubby, heavy, cam followers.

Despite many setbacks - the engine that nominally had 15 horses available went on to produce 24 horses, but at this point the project ran out of time/money/motivation?

It was John Hudson (Nortons Service Manager & walking encyclopaedia) that told me once that installing Jubilee cams in a Navigator provided a boost. I have never tried it, but had no reason to doubt the great mans words.

A year ago this was spotted for sale: No idea if its the same bike. Sorry about picture quality - its a copy of a copy. 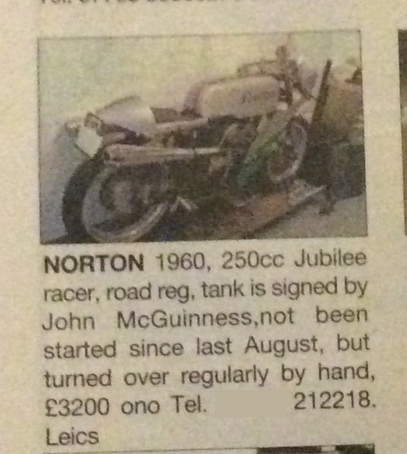 David Cooper (above) mentions a Racing Navigator. I once wrote a 'Potted History' of the Lightweights as a back Page to our Calendar one year (its here on the Website somewhere...) - where I mention that Roy Bacon mentions this in one of his many books. In 2004, Peter Holland (who often contributes to this forum) wrote to (Prof) George Cohen - the editor of Roadholder in 2004 - thus (not sure if George - who disdained the Lightweights - ever printed it):

Reading the excellent history of the Navigator on the NOC website I notice that there is some skepticism about the claims from Roy Bacon that a Navigator actually won a race at Silverstone. ln 1973, swapping bike stories with a work colleague Spencer Robinson, I told him I used to have a Navigator and liked it. "I raced one of those", he replied. Imagine my surprise. Somewhere between a career that spanned the RAF, where Spencer worked as a technician, a fish and chip shop business in Bradford, and then his job with me at Lucas Aerospace, Spence also raced bikes when the chances came up.

A certain M. Hayward and Spencer Robinson were asked to race a Navigator in the 350cc class of the Silverstone 1000km. "Race anything" said Spencer. The conditions were pretty miserable. The track only drying out in the final hour The wind across the Hanger straight was enough to blow the machines across to the left as required for the race line. Most riders wore wet weather road gear over their leathers but still froze thanks to the combination of wet and cold.

Spencer told me the bike was a superb handling little machine that went as fast as anything else in the wet conditions. It gave excellent feedback that allowed you to ride it at the limit of adhesion. The poor ground clearance was not a problem in the rain. It never missed a beat and did 182 taps at an average speed of 64 miles per hour. Second place 350 BSA Gold Star only completed 174 taps. The race ended after eight hours when the fastest machine completed 1000km. This was another Norton, a 650SS ridden by a certain P.W. Read/B.P. Setchell. A Norton 88 won the 500cc class as well.

Honda won the 250cc class, but I'm sure that if some enterprising Jubilee owner had entered.......

Hi Anna, Neil and others,

Among some normal Jubilee inlet manifolds I have a manifold for twin carbs. Fabricated quite well in steel it goes onto the heads and presents two stubs with mounting flanges at about 90 degrees to each other.

I've no use for it Anna. Let me rescue it from DEEP storage and photograph it.

Here it is. 20mm ports to go against the cylinder heads.

I guess this could be strapped to either a Jubilee, or the ports opened to 22mm for a Navigator. Would suit someone with a lot of time on their hands and a couple of 27mm carbs.

Come to think of it, I have got lots of time on my hands, but not that much.

That's a helluva piece, you can feel the love. I like people who do this sort of thing, hope he/she's still around having a chuckle at this post

Wonder how a pair of pair of 27mm aluminium concentrics would go on these for a Navigator cafe racer project like the racer. Looks like quite a tortuous inlet path from carb to valve though.

Hello Peter - I was thinking more of the aluminium twin port manifold in one solid block, a bit like that was made of Dominator twins?  I do have a pair of 626 these being 26mm left and right  refurbished  by Martin Bratbury  some time ago.  The carb angle was to be at 60 degrees to each other splayed out with bell mouths, and I was going to gas-flow the heads just a bit and fit bronze valve guides  and recut the valve seats as both heads have to be stripped anyway. As I believe one of them may  have a bit of a bent valve on the exhaust side the bike was going back as standard trim  but the engine would have that bit more acceleration and top-end speed than the standard model. You may like to call this bike a Norton Navigator 'SS' model - just to give it some interest,  well we did things like this to our bikes back in the golden days of our young years             yours   Anna J

Ogri would have been proud…

Ogri would have been proud of that one Peter!    I do like the idea of a Navigator SS Anna, if only Norton management had - perhaps you will!!!

hello I was thinking on the lines of the Sporty Nortons So why the lightweight should be added to sporty Nortons   after all said and done  they just one underestimated  motorcycle    and have achieved speeds of 101mph with Mr daniels on its back  and this was a standard motorcycle with just some carburettor mods  so hey make a good handy Norton for your club rides out,  I am still beavering away  On my Navigator resto  now down to the bear crankshaft  and cleaning the cases    everything I have see so far looks like new, and on standard shells, she pucked up a bit but no damage to journals  still in good serviceable order , just need a good clean everywhere, I love a challenge with a underdog        yours   anna j