So after last Saturday´s ride which ended in an oily mess around the bottom of the bike I followed Nick´s advice to check the oil level. Oil tank was almost empty. I did not shut my anti wetsumping valve and this is what came out the crank case: 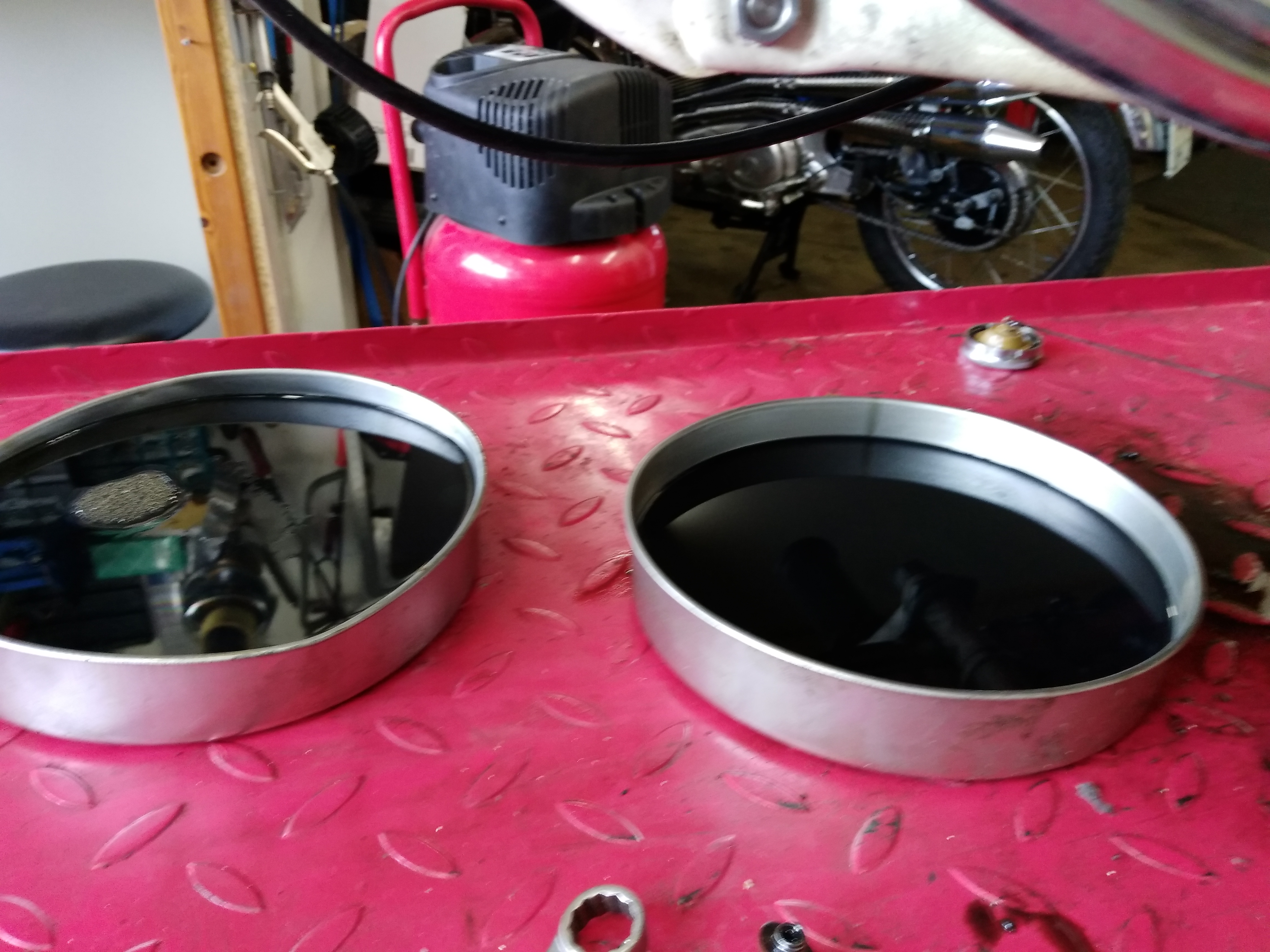 As mentioned this was since Saturday! 5 Days. What could be wrong? Oil pump totally worn out or did I mix up the hoses from and to the engine?

I looked into the chainguard where the vent hose from the oil tank ends: 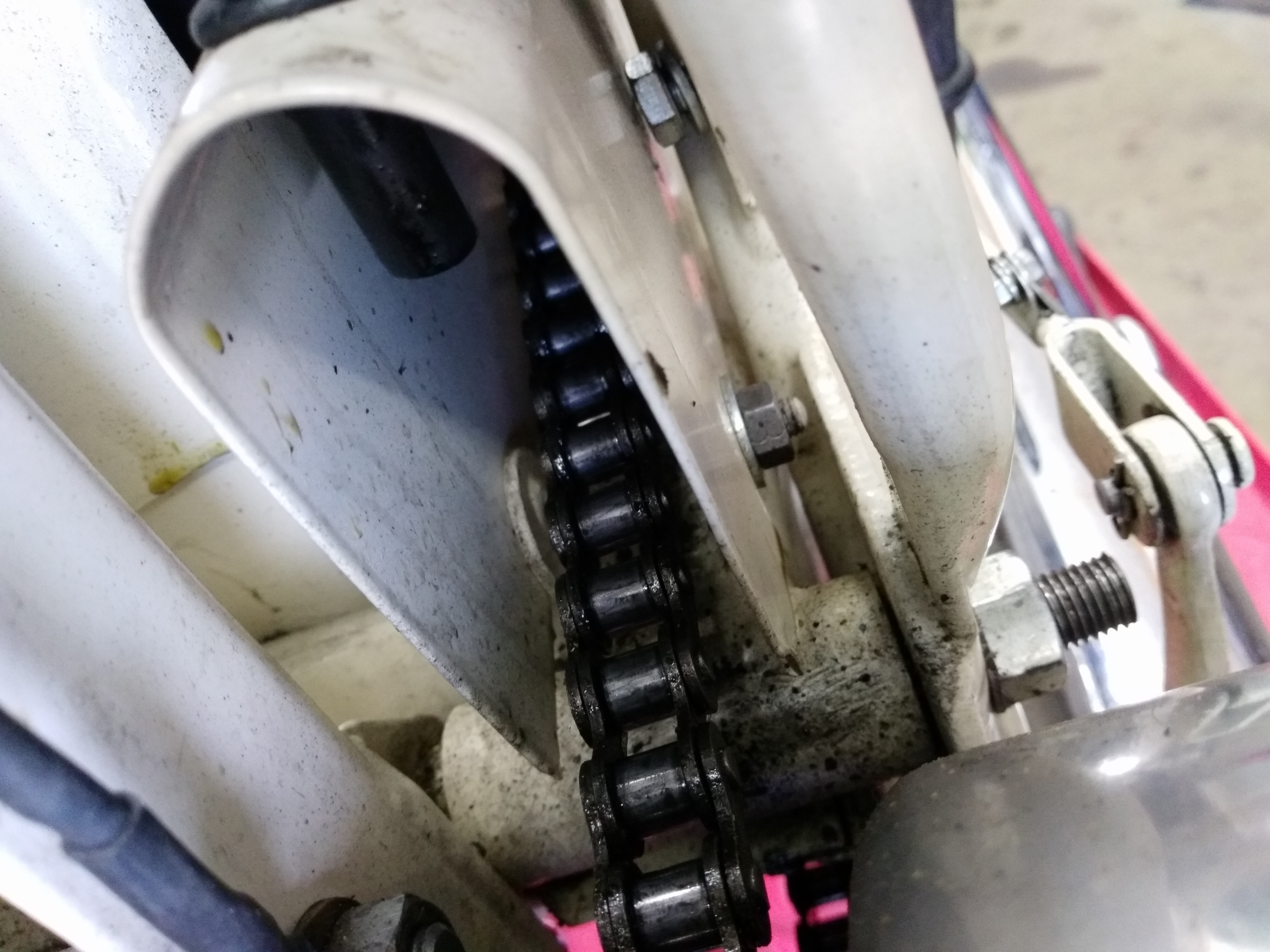 It looked clean so the oil must come from somewhere else.

The chain looks messy so maybe the gearbox seal?

This is the rearside of my oil tank: 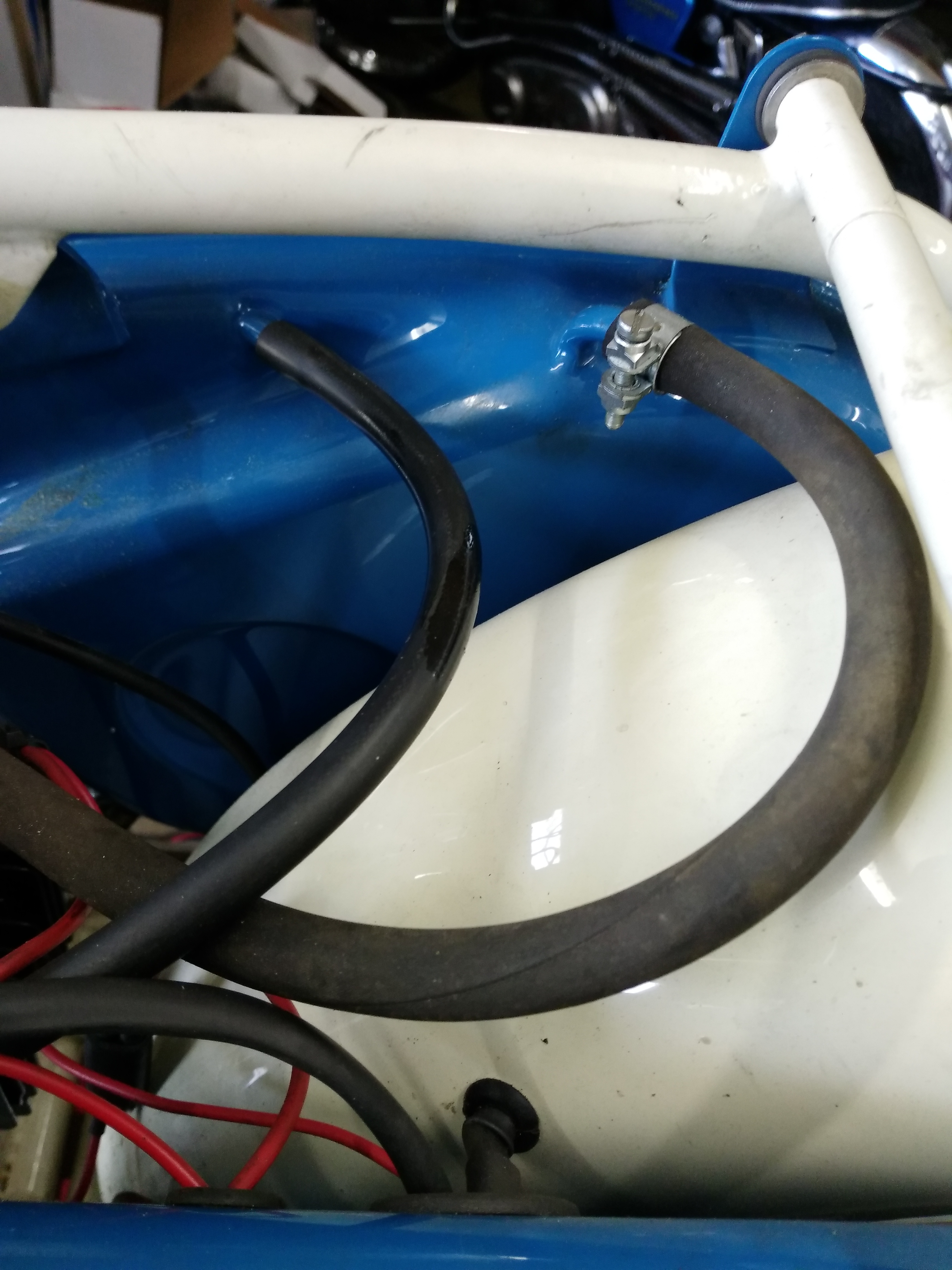 I guess I mixed up the hoses from the (early) breather and the oil mist hose running  towards the chainguard. The bigger one is the breather hose in my case and the smaller one is the mist hose.

So I guess the oil is routed directly into the crankcase? That´s why it was full of oil?

The breather hose should be on the left and the mist hose on the right. according to this diagram found in the online Lightweight compendium: 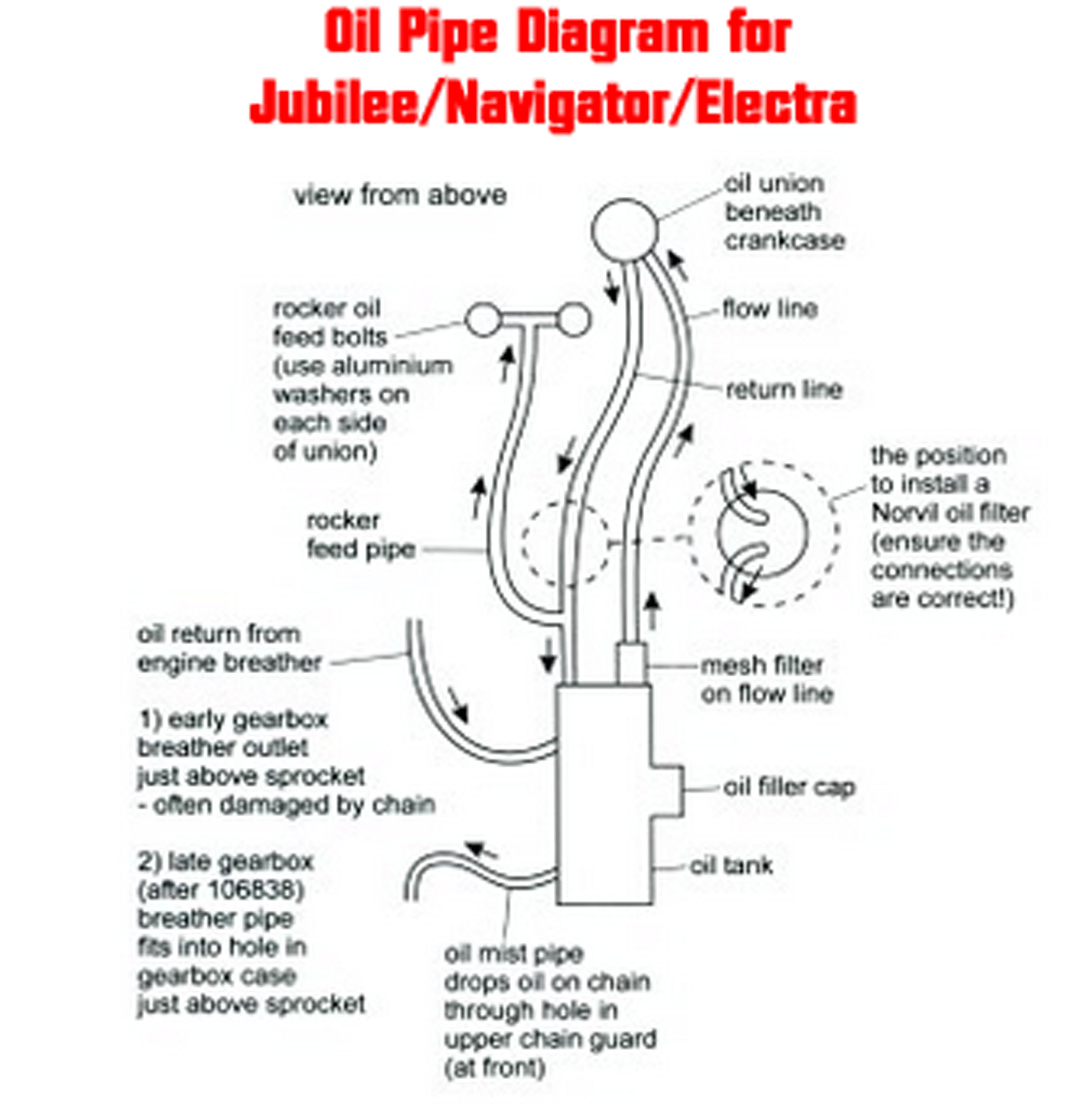 Hi Ulrich, I can't see how…

Hi Ulrich, I can't see how mixing the breather and mist pipes up could cause the wet sumping although it could cause excessive lubrication of the chain - I've made that mistake in the past and it had that effect.   All my Lightweights have wet sumped to a greater or lesser extent but no where near as much as that and not that quickly.   Did you recondition the oil pump or replace it with a new one when you rebuilt the engine?   Excessive oil pump wear will allow oil to drain back down into the sump like that.   Checking or replacing the oil pump is a reasonably straight forward job but does require taking the timing side cover off which inevitably means retiming the engine I'm afraid!   If I am doing that job I always remove, check and clean the oil pressure relief valve and it's gauze filter and replace the crank shaft oil seal and the one behind the points (making sure they are the right way round!).   The other cause of leaking round the drive sprocket is the oil seals behind the gearbox sprocket and clutch - a check of the gearbox and primary chain case oil levels will give you a clue to whether that is happening.   Another less obvious one is a leaking crankshaft oil seal on the primary side - that allows engine oil and piston blow by to leak into the primary chain case pressurising it and forcing oil past the oil seal behind the clutch with the effect you have seen.   When I first got my Navigator I had oil leaking from round the gearbox sprocket and I had to replace all three of those seals to cure it.   Sorry that all seems negative and extra work but since I replaced all those seals my engine has stayed remarkably oil tight - it can be done!   I hope that helps, good luck and keep at it, the Navigator is a great little bike once you have got it settled down!   Nick

You´re right Nicholas. Wetsumping is not caused by mixing up the hoses. I did recondition the oil pump.I have a spare one in my boxes somewhere. I will have a look at this also. I also renewed all the seal inside the engine. Maybe they leak now because of the pressure caused by the oil in the engine? 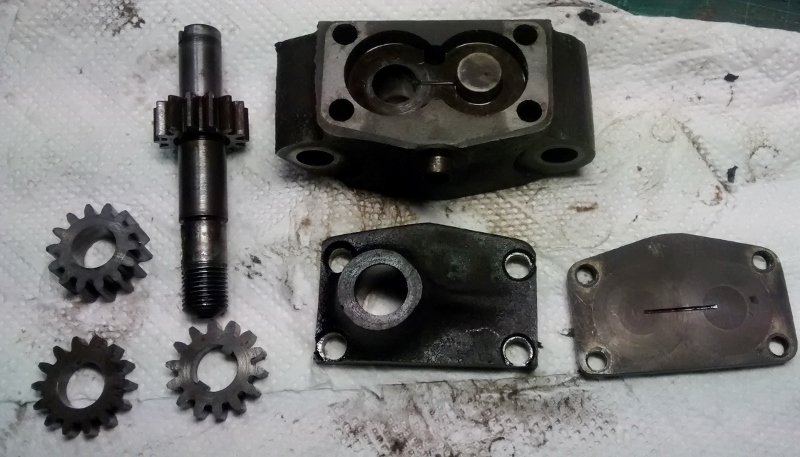 Maybe there is something blocked inside the oil circulation so that the oil is not transported back into the oil tank properly. I did check and topped up the oil before I went for that ride on Saturday.

Well, opening the timing side again and check the pump, seals etc.

Before taking things apart I would measure the scale of the problem. I  Would drain the sump, fill the oil tank to normal and measure the wet sumping per day for  a week. This is good information that lightweight owners might want compare to their own bikes for comparison. This would identify what is is average and what is excessive and how it compares with the wet sumping that occurs after fitting a new oil pump. I have found this useful for managing wet sumping on my own bike. For me wet sumping is not too big a problem in the summer if I use the bike a lot. Depending how long I store the bike I drain off the sump before using, it`s a pain but it is manageable problem.

I opened up the timing side today and this is what I found: 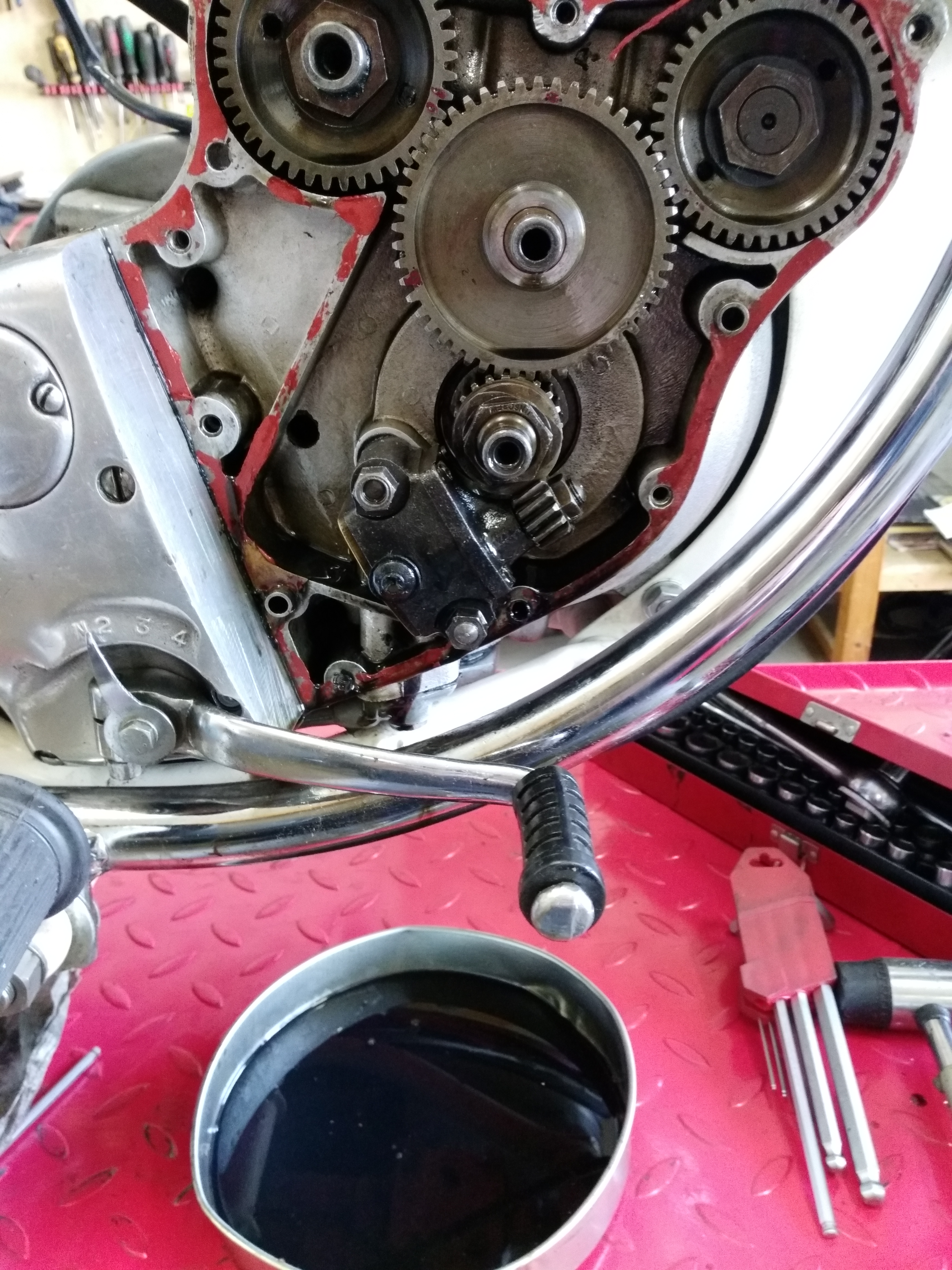 About a pint of oil came out when I lifted the cover.

I removed the oil pump and I spotted something ! 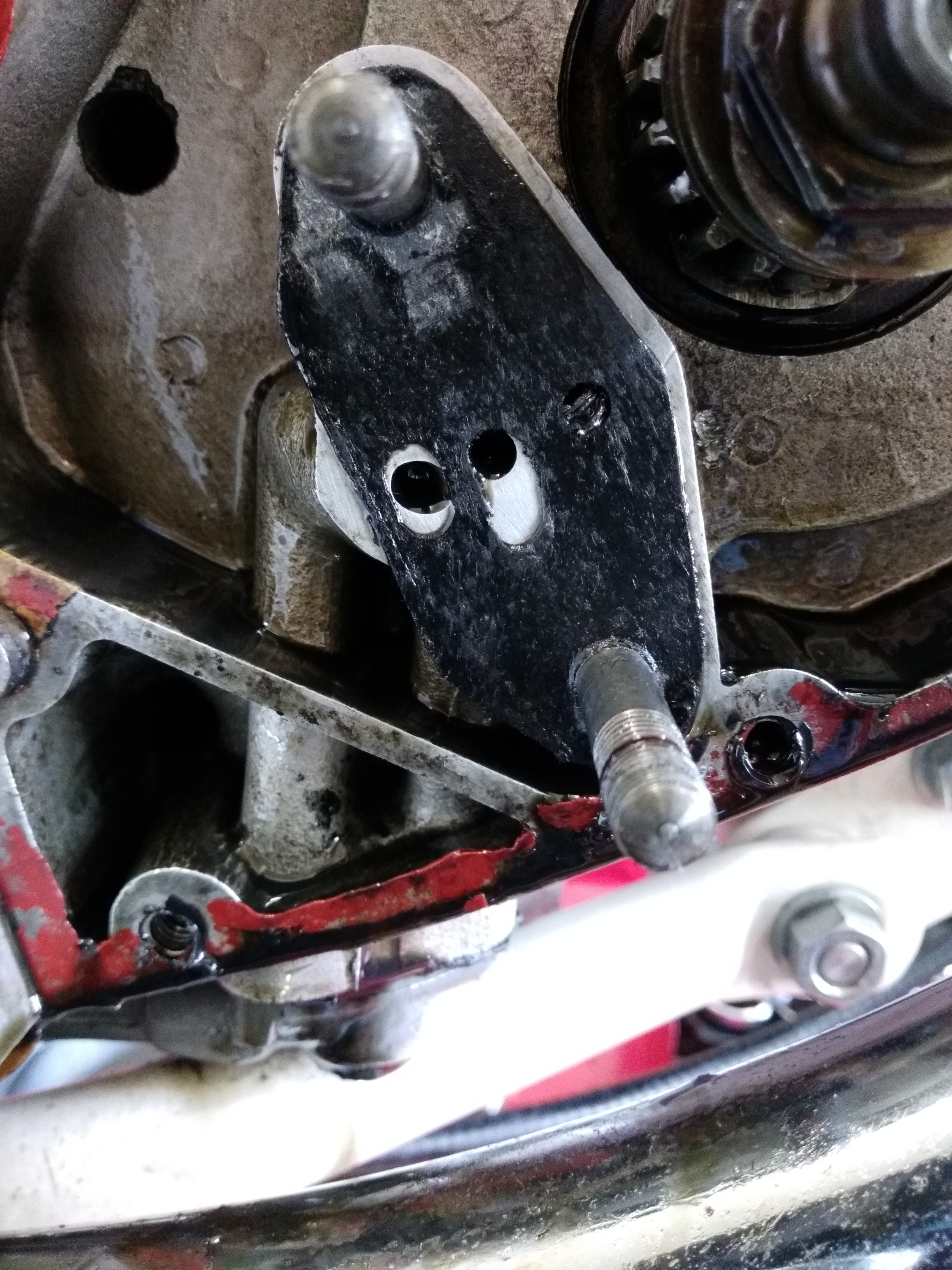 Have you seen it?

Here is a better picture: 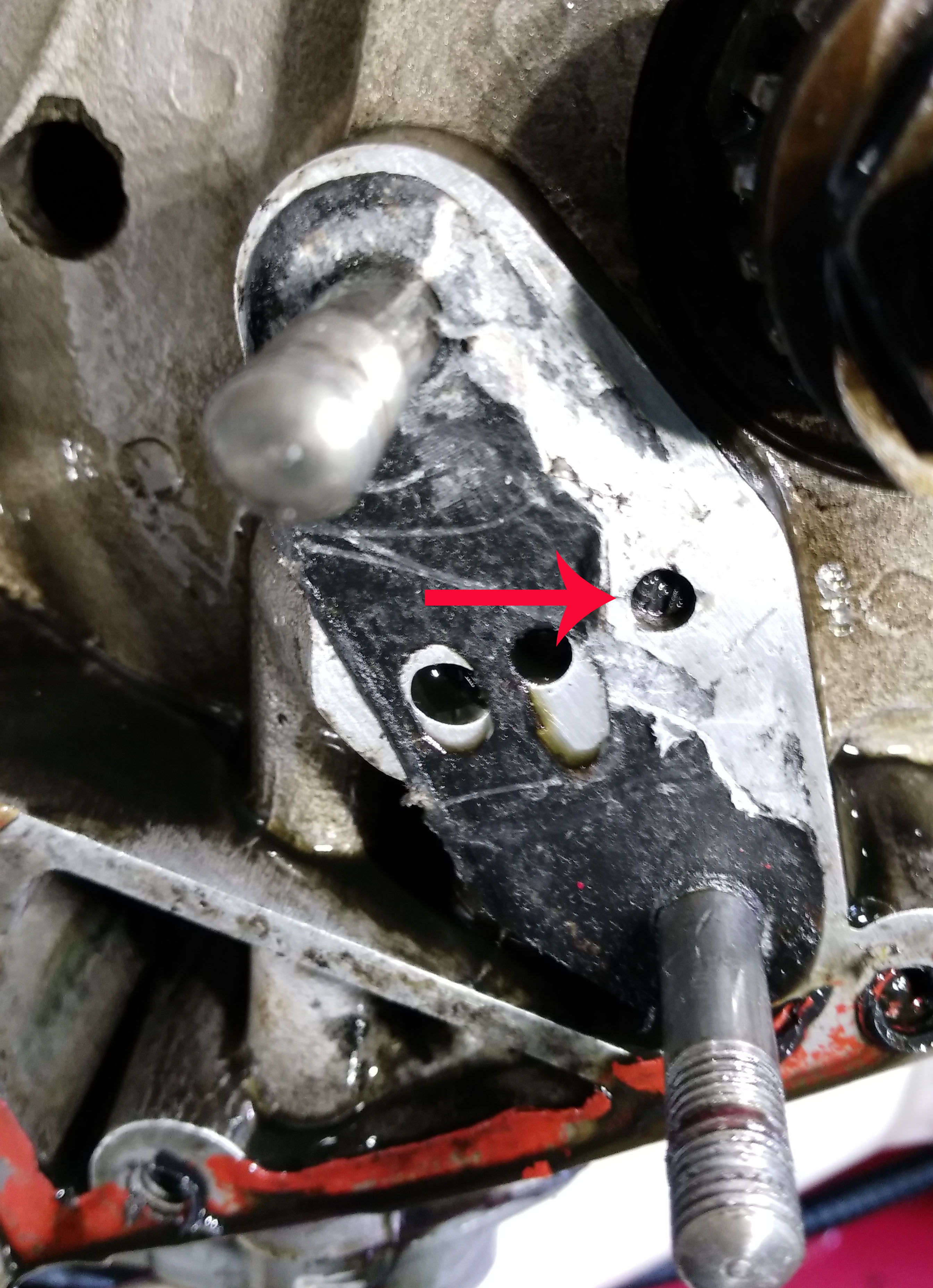 The return hole for the oil pump is blocked by a blob of silicon sealant! 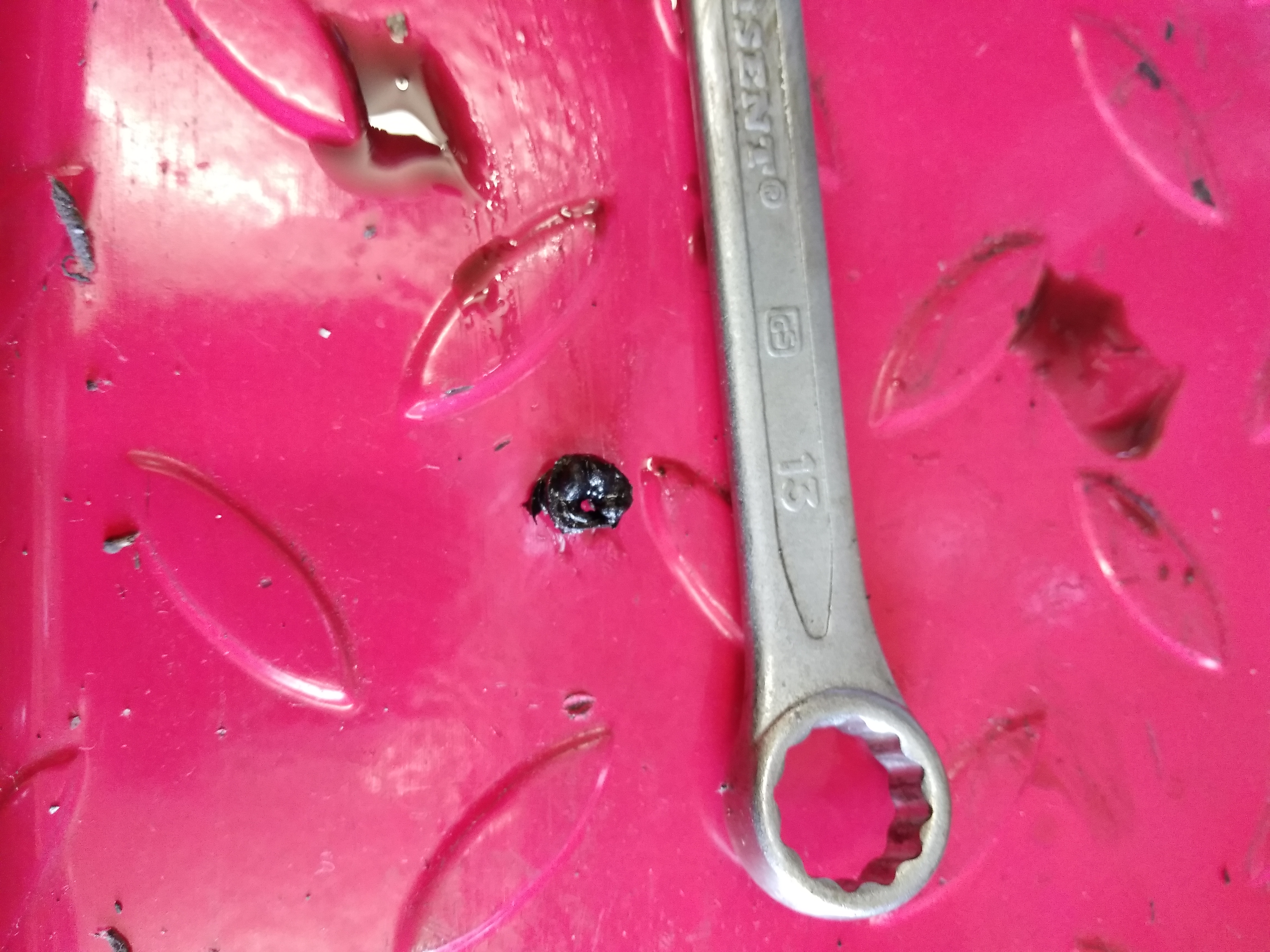 Ran out of time to test the bike and had to buy some oil. Stay tuned!

Another thing to look at is the sump plate & gaskets at the bottom of the engine, and that the oil return hole is not closed or blocked by gasket cement/silicon. Its a common mistake that is easy to make. Oil comes down to the engine - but cannot get back - except via the breather.

The oil, after use, drops to the bottom of the engine onto the sump plate via a strainer, then towards the timing side, where a pipe sucks it up to the pump - which pumps it back to the tank & rocker box.

There may be an article about this very subject in a Roadholder shortly....

The picture below shows such an instance of a blockage.

I see you found the problem! It was the same as I suggested .... but the blockage had moved!

You still need to check that all is OK in the area of the sump plate.

I use paper gaskets if…

I use paper gaskets if possible held in place with goo  to one side. I nip the components lightly together and leave to cure. I then remove the components and trim up. This enables the gakets to be re-used and allows the flexibility in the junction to adapt to imperfect mating surfaces when finally nipped tight.

Yesterdays and todays self isolation task was putting together the timing side, re-torqueing the head,

filling up oil and make a test ride.

I was surprised how much I could tourque down the heads! Some nuts really felt very loose!

After that I adjusted the valve clearances.

One bolt was too loose: 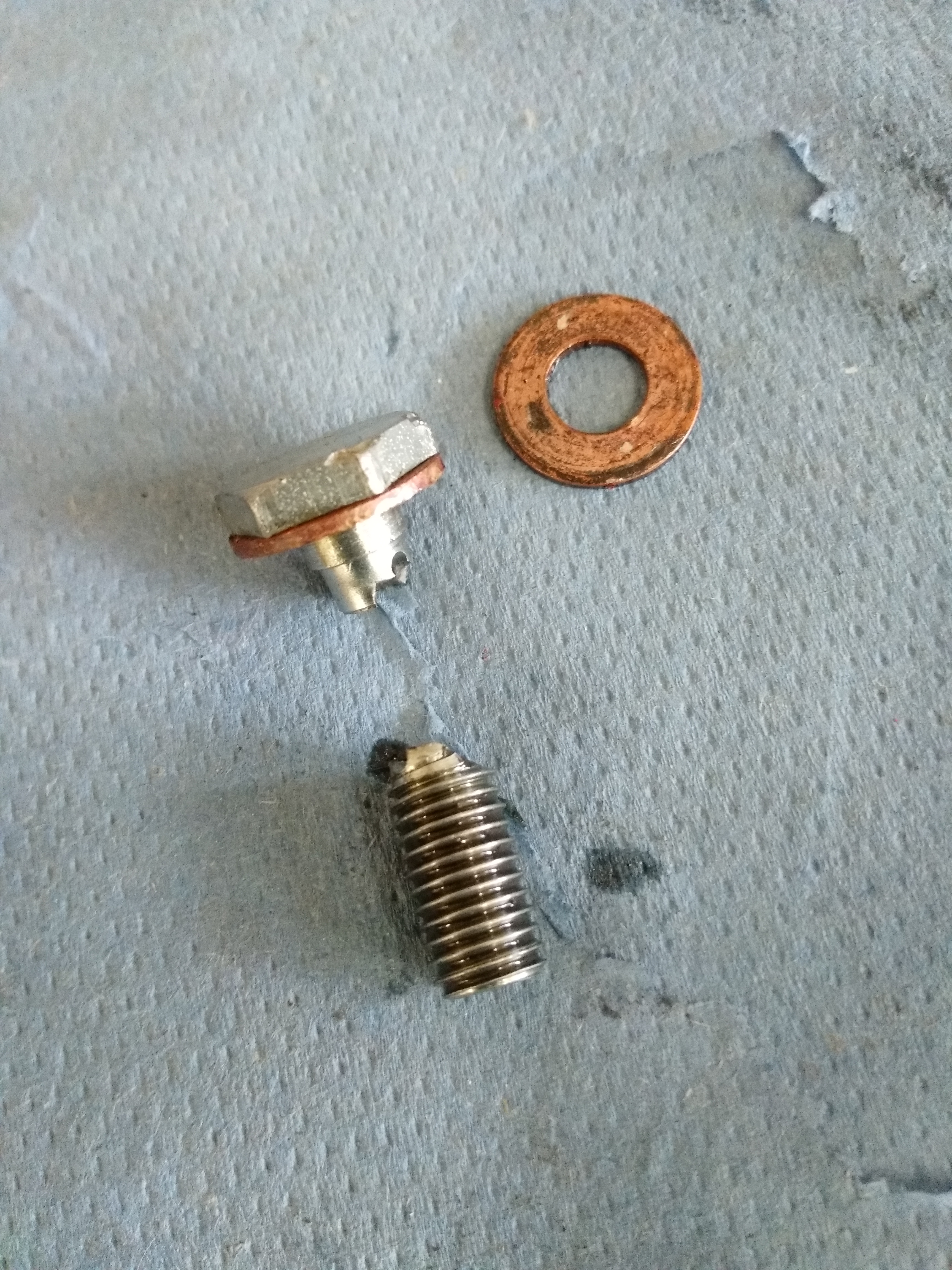 Luckily I had a spare one at hand!

I used two paper gaskets and sealant for the rocker covers and filled up the oil.

2 continental litres. The oil level was 2" below the filling hole as Nick suggested. I swapped the two vent hoses and started the engine. Some anxious seconds later the oil was flowing back in the tank.

After some rides around the block there was still an oil leak from the left hand rocker oil bolt and from the bottom of the gearbox cover. I carefully tightened the according screws .

Will take the bike for another ride tomorrow.

Well done Ulrich, having the…

Well done Ulrich, having the time to fettle the Navigator is a positive of the lock down!   It always surprises me how much you need to torque down head nuts after the initial running in period which proves why it is so important and worth all the work to expose them.   The healthy oil return sounds very promising and something I obsessively check, the dreaded silicone sealant blockage is always worth having at the back of your mind.  Lets hope that has cured your oil leak problem and you can now enjoy a successful running in period.  Keep us posted!    Nick

Beware of too much pressure when torqueing down the head nuts.

Google tells me the Metric Equivalent is 20.34 Nm - (I hope that is correct).

Remember to do all 6 on each head in the proper sequence, to avoid distorting the heads.

Wise words Andy, I so wish I…

Wise words Andy, I so wish I had owned a torque wrench back in the 70s and 80s, it would have saved me so much wasted effort, hard won cash and heart break!

A good friend of mine taught me to use wellseal applied with a paint brush on one half of the case - does not matter which, apply gasket then wet exposed surface with grease or oil, then wellseal the mating face with paint brush. Oil helps the gasket come away when disassembling. The advantage with wellseal is it will not block oilways, as seen from above pictures it takes a very small amount of goo to cause a real pain. Seems a bit old school but very satisfying and seems to me it cant go wrong. I have also come across an article the suggests use of silk thread and wellseal. I used that for my crankcases - dry so far. Though I have leaks else where ;-)

Regardless of what it tells you on the tube silicon sealant has no place in the rebuilding of engines. Invariably people use vastly to much sealant, with silicon this is a recipe for disaster and can lead to a blown up motor ,which I've seen . Silicon is for bathrooms.                 Far better is Wellseal, like a thin varnish, petrol proof and non hardening, applied sparingly with a small artists brush it works, I've  never used anything else.