Hello again. I've looked online for the above mentioned exhaust system for my N15CS, but can't find any listed with the usual suspects. Does anyone know where I can source such, the standard straight thru pipes with clamps if poss, or near as dammit.

John: Can you provide the…

Can you provide the part numbers for the items you are looking for?

I will check the local sources here in Northern California

You could try Walridge Mot…

You could try Walridge Motors as they would have all the parts that you require. There is a web site www.walridge.com Walridge also has a very comprehensive catalogue that you can down load from their web site.

There is also Tim Wassell that also makes these exhaust pipes.

The part numbers are as follows

You will need the Norton Spare parts list for 1964. This is listed for the 88ss, 650ss, 650/99 & Atlas. There is also listed the G15P, & G15CS. The letters M, & N are for the Matchless and Norton versions of both the G15CS, & the G15P. One of the G15P's was listed in the dispatch records as an AJS. Be aware that the 1964 parts book is for the 1963 dispatched version of the G15CS or then called the Norton Atlas Scrambler that was dispatched from October, November 1963. The telling part number is the part number listed for the G15CS, as being the same as the G15P or G15 Mk2 as being a one piece solid footrest. Later changed in January 1964 due to a change in the federal law.

Cheers Anthony. Top tip. Ordered from Walridge, awaiting shipping invoice. I also got the chaincase support stud I am missing too. Their part number for the pair of pipes is 03-0264/8.

I got the parts list for 1964 OK. All info gratefully received. Hope to thank you personally one day. Just missed you on the AMC spares stand at Kempton last.

That must have been Roy Be…

That must have been Roy Bellett's stall at Kempton Park. I was there talking with Rob Swift as he has a 1965 Matchless G15CSR, and I have been helping him with his restoration of it. I took along an original rear brake pedal as the one that he has onhis bike is not the original one as he has never seen the original G15CSR rear brake pedal. The other one was Steve Surby's stall, as I had some ex factory pictures that I was showing him at the time, but they are both AMC spares specialists.

There is some differences with the petrol tank badges on the 1964 onwards Norton N15CS and the Matchless G15CS bikes but it is all down to detailed differences. There is also an interim parts list for 1965 that gives some of the newer updates for the forks and other parts. Berliner also issuedservice release's in 1965 with many updates. These I managed to retrieved from a well known dealer for Berliner in Seattle as he had put them in with his recycling box. The fork springs were changed from the 1963 onesfor 1965. The 1963 Atlas Scramblers did have many differences to the later 1964 N15CS bikes. The odd situation is that the crankcases were stamped with a G15CS, but Berliner sold them as Norton Atlas Scramblers.The first N15CS was 108729 and this was dispatched in January 1964.

Hi Anthony, it was Steve'…

Hi Anthony, it was Steve's Stall. "Just sat sitting there he was" said Steve as I mentioned your recommendation.

Pipes will arrive tomorrow, one hopes.

I was at Steve Surby's AM…

I was at Steve Surby's AMC Classic Spares stall as I took along some ex factory or Norton Matchless Division's photos of the G85CS, and the later 1967/68 Matchless G80CS photos. I have allot of this type of factory material and I take it along to show Steve.

£58 customs fee on these pipes. Expensive lark buying from Waldridge, but needs must. I believe you had seen this N15CS on the AJS & Matchless show stand somewhere in the recent past. The owner had a G15CSR on there too. N15CS is none too original, with modified P11 high pipes. Had you seen the rusty engine internals you might have liked it even less!

That N15CS must have been…

That N15CS must have been on the Surrey section of the AJS & MOC stand next to a very nicely restored G15CSR at last Decembers show at Kempton Park. I have met the owner a few times, and I explained to him what was wrong with his G15CSR, which he wanted to know about to get it all correct. I gather from Mike that he could not supply those single exhaust pipe clamps as I have the original ones if you want to contact me about them.

That N15CS must have been…

That N15CS must have been on the Surrey section of the AJS & MOC stand next to a very nicely restored G15CSR at last Decembers show at Kempton Park. I have met the owner a few times, and I explained to him what was wrong with his G15CSR, which he wanted to know about to get it all correct. I gather from Mike that he could not supply those single exhaust pipe clamps as I have the original ones if you want to contact me about them.

Hello Anthony. Yes please for the exhaust clamps. I have the pipes & brackets, just need the clamps. I'll try a message to you. TTFN John

Hi again Anthony. I sent you a message with all my contact details but got no response yet. Did you get the message? I have no way of contacting you other than on here.

I have not received a mess…

I have not received a message as I do not know it works on the NOC's web site. I shall have to contact Mike to get him to send me your details.

I have not received a mess…

I have not received a message as I do not know it works on the NOC's web site. I shall have to contact Mike to get him to send me your details.

Hi Anthony, either that or…

Hi Anthony, either that or just drop me a mail at jack dot clegg at talk talk dot net & I'll furnish all.

Sorry I didn't get back t…

Sorry I didn't get back to you John. I see that you are good to go. Mike

Thanks Mike, but have not…

Thanks Mike, but have not heard from Anthony yet, other than on here.

Im new to the club thanks for having me.

I have recently bought a 1964 Norton N15CS repatriated from California last year and now registered here , i've a few questions mainly is it possible to find out from it's Frame & Engine numbers it's build date etc and even what colour it would have been as at moment it's hideous blue, Exhaust and Mudguard style etc

The factory dispatch records will only give you the date that it was sent to. That would be the dealer, or agent, or in the case of the USA, the Berliner Corporation, at Hasbrouck Heights, New Jersey, NY, USA. If yours is 1964 dispatched N15CS it will have the heavy front and rear mudguards, with a large dual seat. The colours would or could have been Cardinal Red or Hellfire Red, which is an AMC Matchless colour. It would not have been blue. The rest of the cycle parts were in black, with the rear chain guard also in black.

Thank you  I can find…

I can find traces of red under the tank , is there somewhere i can check it's numbers to clarify what year she is as i am only going on what the Importer told me? it has a chrome rear guard with a ridge in the centre the front also chrome but with only a single bridge to forks instead of into both holes not sure if correct both might re chrome , Senior moment on my part i was told 1964 Log Book 1965 but i a untested to find out what's correct. I am seeking a chain guard as it is missing ,she is a rolling resto up to now oil change new tyres etc but the bodywork is due to go for painting next week.   Have i hijacked someones thread here if so my apologies

The rear mudguard sounds like it is the correct one, as the front and rear have a ridge up the centre. These type of mudguards were used up until 1965 then changed for 1966, to a plain chrome ones, as per the later P11A series. The only way you will know what year your bike was produced and dispatched would be by the engine and frame number. If it has a chopped pair of Amal carbs, it is from 1963 to 1965. In 1966 there carbs were left and right hand Amal Monobloc, and for 1967 onwards, Amal Concentric The front forks also differed, from 1963 through to 1968. There were so many changed and improvements to the N15CS, G15CS series of bikes. A rear chain guard can be obtained from AMC Classic Spares, as that swinging arm is the same for all the later bikes from 1964 onwards. It was painted black.

Thank you . It has indeed…

Thank you . It has indeed got the chopped Amal carbs with it, which i have now changed to a single Amal premier . Considering the Electronic ignition in the copy Magneto next but the bottom nut on said item looks a nightmare to get at .

I believe Waldridge get the pipes made by TJ Wassell. So they are crossing the Atlantic twice!.

Once you have got it off, a common modification here is to replace it with the long nut from BSA A7/ A10 bikes and never have to struggle again. 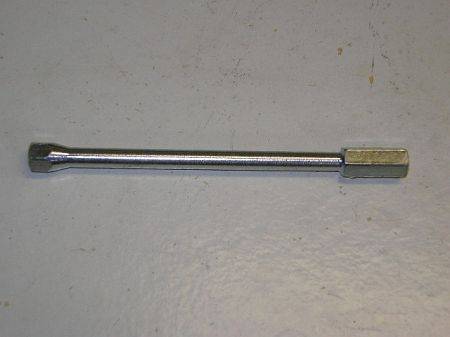 RGM sell them, as well as most BSA and old Triumph dealers too.