I've been working on the clutch of my Navigator, its in resonable shape, I'm going to replace the rollers in the clutch centre.

The clutch looks, to me, to be the same as the heavyweights, less plates and different sprocket accepted.  Would that be true?  Is there any interchangeability between light and heavy clutch?

Hello John. I'm not entirely sure, but I think that although the construction is similar, the L/W clutch is a smaller diameter. Therefor plates etc not interchangeable. Might be worth looking at the part #s on the Norvil website.

No doubt Andy S will be along in a minute to set us both straight!

I'm not an expert in them but there are two clutches, one fitted up to the introduction of the Electra and the other after.

Some parts are the same as the heavies , plates etc, but a lot of the hub parts are not. You need to check Part Nos and watch out for the many supersessions carried out over the years.

I have added a couple of images I doctored in Photoshop to try and get an accurate image of the early Navigator clutch as none of the Norton images are correct. Hope these might be of use to others as well, I reckon if there are any faults with them someone will come in and correct them. 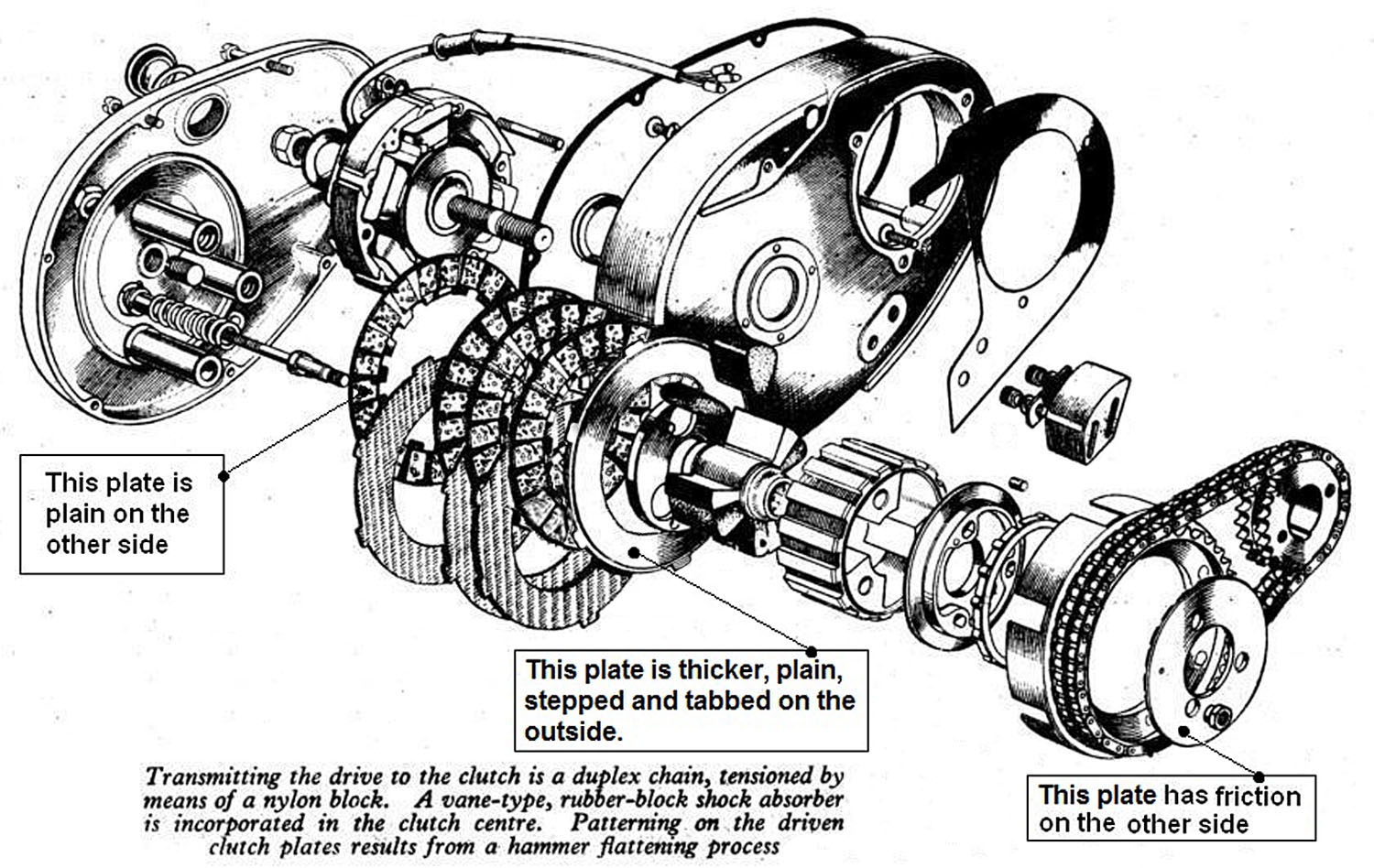 Looks like the plates are the same, anything else?  Things like spring cups, pressure plate, shock absorber rubbers and so on.

The reason I speculated that the light and heavy twin clutch are similar is that I had a light clutch sat on the bench alongside a Commando and a Triumph T140 clutches.  I was surprised to see the light clutch diameters very similar to these.  Not a very "scientific" way of doing things but it did pique my interest, hence the question.

Another thought, I am told a Manx uses 3 (double sided) friction plates, could a light weight manage with just 2?

The Dominator clutch & Lightweight clutch do share some components, luckily. However, its difficult to be precise as both changed over the years.

But two items differ for certain - 1) The clutch centre has 3 different fitments on the Lightweights, none of which fit the Dommi & 2) The clutch basket inc sprocket has a single row sprocket on the rear, while the Lightweight item uses a Duplex chain.

The plate sizes are the same for both - someone above thought they were different - not so.

The only sure way to see what fits what, is to use the parts list booklets to compare the two.

The Manx ran dry...with oil drip feed to the open chain.  So rather different from an enclosed chain in an oil bath.

David, point taken about the Manx running dry.  Probably runs cooler as well, one start per race therefore very little slipping except at Ramsey or the Mallory haripin!

Attached is the photo that got me speculating about the clutch.  T140, Commando and Lightweight clutches together, drum diameters very close.  I'm a big fan of the Commando's diaphragm spring, surprised it hasn't found its way in to more bikes than it has.

Some more slipping after fuel stops on the TT. John forgot Governors bridge. Less slipping needed with 5 or 6 gearboxes.Spring strength and length also affect how many friction plates needed.

Didn't some of the later Villiers stinkwheel engines have a diaphragm clutch? Did that somehow inspire Norton Villiers with the Commando clutch?

Anybody here with experience of these engine units, perhaps such a clutch might fit some of the L/W Nortons- after all, lots of James/Fanny B bits incorporated to the earliest Jubilees?

Just waiting to be shot down in flames. Again.....

Edit: " The (Starmaker) clutch was the first application of the use of a diaphragm spring in a clutch to be used on a motorcycle. Diaphragm spring clutches have now become universally used on both motorcycles and cars. The clutch had two sintered bronze friction plates with one steel intermediate plate, pressure being applied by a diaphragm spring. Although the clutch had a very high spring pressure the natural mechanical advantage allowed by the diaphragm spring plus the scroll type release mechanism ensured light finger pressure at the handlebar lever "

I think the Starmaker was the only Villiers power unit to use a diaphragm clutch, this eventually became the AJS Stormer, I believe.  I would like to fit a diaphragm clutch to my Navigator, a Stormer clutch would, I think, be ideal, problem is finding one.....

As I said in a previous post, surprised that there are not a lot more bikes using them.  As far as I know BMW and Moto Guzzi with their car type clutch and Harley Davidson use them, a number of 50's - 125's from the far east also use them.  The only Japanese big bike to use them that I know of  was Yamaha's FJ1200.