New to a Commando and to the forum so any advice welcome.

Just bought a '72 Roadster, was enjoying it till started looking deeper into issues, but battery has given up the ghost, one of my fears as turning this lump over will take some current for the Alton electric foot!

However, when battery wouldn't crank had to do it the real way, no issues with starting but kickstart hitting silencer on down stroke and contact on return stops kickstart returning.

So, incorrect silencers fitted? Incorrect kick start? Is there some proven way of aligning the silencers better? Is there a silencer / foot hanger bracket with thinner rubber cotton reels that will allow more clearance? Did I read somewhere that a MK3 kickstarter will give more clearance?

Any thoughts or help appreciated.

Hi. I just had a similar…

Hi. I just had a similar problem on the Dommie 99 I’ve been rebuilding. Unfortunately I managed to scrape down to bare steel :-(

To fix the problem I slackened off the exhaust pipe clamp ring that fixes the pipe into the cylinder head then pressed the pipe hard inwards with my shin and held it there. Whilst holding the pipe in I fully re-tightened the exhaust clamp ring. That sorted the problem and I’ve ridden the bike since without the pipe moving back to its fouling position. The end of the silencer has moved outward slightly but I can live with that.

They all do that, sir…

They all do that, sir.....Lightweights, Dommies, S/L M50- all the Nortons I've ever owned had this problem. I think the factory designed it in, as a means of generating spares revenue....

Never happened with my very…

Never happened with my very orriginal dommie,  the pipes were more tucked in and the silencer bulge came further back  giving more clearance to the frame tube.

First step should be to…

First step should be to slacken the exhaust pipes at the cylinder head, and likewise the silencer-to-pipe clamps.

This should allow you to wiggle these joints such that when re-tightened your problem goes away.

Mk3 kickstarter is cranked further out to give more clearance for the "black cap" silencers. Might help. It's possible that the kickstarter is bent - happens if the bike falls over on its side. You could try bending it out a bit - off the bike. And there are after-market kickstarts that have a pivot at the bottom so the whole starter arm swings out rather than just the top bit. Sammy Miller comes to mind.

It may seem counter…

It may seem counter-intuitive, but the tip of the silencer needs to be further outboard in order to move the forward part inwards. I believe that the old NOC 'Service Notes' referred to the fitment of thick washers alongside the spacers on the rear mounting bolts of the 'Z' plates which the factory failed to include in the Spare Parts Lists. This slight angling of the plates has quite a large effect at the clamp area which allows the down-pipes to be pushed in further.

When i had a complete set of exhaust pipes and silencers made in stainless steel for my 1970 Commando Roadster, the exhaust pipe were made so that they tucked in where the kick starter came down. Then they went out again, to connect to the silencers. This was how the factory did it, and the pattern companies it seems do not bother with this extra part of the fabrication of Commando exhaust pipes.

Also, as mentioned in a previous query...

... the spherical seats for the exhausts in the heads used on the Mk3 allow much more tweaking of the position of the pipes / silencer. Part number  06.5259  available from AN (and no doubt others). As Richard says, pushing the back end out moves the offending portion inwards.

tucking the silencer in

I had the same problem with my Dominator.  What I did was mount the silencer on the inside face of the pillion footrest bracket instead of the outside.  That gave about 1/4" extra clearance and entirely eliminated the issue.  The bike is a little asymetric as a result, but it works.

Yes, the Commando is different, but a similar approach may work.

Saw this on Sunday at…

Saw this on Sunday at Whitchurch bike meet. '71 750 Roadster. Didn't speak to the rider so don't know where it's from. But no dents in this silencer. 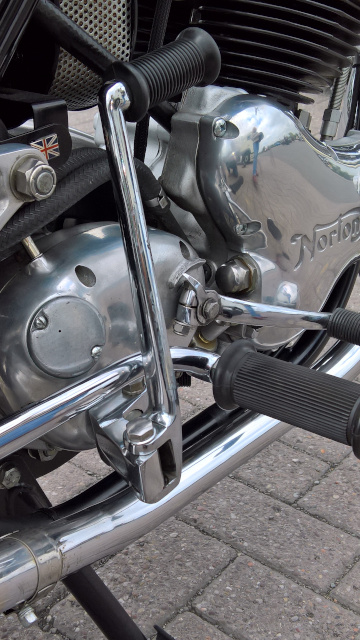 That appears to be a T160 kickstart lever.  I got one for my ‘68 T120 many years ago when it had swept back pipes and rear sets.  Thought it would help keeping the kickstart away from my leg, but never got on with the way it would start folding back when lifting my leg ready for another kick. My solution was a standard T120 kickstart, heated and bent forward at mid height to clear my leg,

That's my bike, it's from RGM and, yes it's a T160 "style" kickstart made for Commandos. I bought it for a Dommie cafe racer but it didn't work with the rear sets I had on it so I put it on my Commando instead. The original one didn't hit the silencer either. As for the the statement "They all do that" about hitting the silencer: WALOB.

One point to note is that, being longer, one has to get one's leg up higher to begin kicking.

Yes, bloomin' awkward sat on the bike in traffic, stalled, after filtering to the front of a line of cars...

The kickstart doesn't foul the exhaust on my Commando, it certainly used to clout the silencer once over however. I think that some of the exhaust mounting bobbins available are too fat {BMC Mini exhaust mountings} thus pushing the siliencer outwards. I have fitted some slimmer bobbins and the silencer is tucked in a little more and no more clouting the silencer. The trouble is I can't remember where I got them from for the life of me, but probably came from Roger Myers.

Graham my slim bobbins came from RGM, took some finding but they had the sizes on the description and I had an original to measure and compare. Work a lot better than the Mini ones.

Hi Richard  I think your problem is not helped by your silencers, the tapered part  where it clamps to the exhaust pipe yours has a bell section (which I call a Triumph pattern) as apposed to ( which I call a Norton pattern )which tapers all the way down to exhaust pipe size .I hope this makes  sense. As others have said a MK111 kick start would give more clearance

Mk2A. These pictures may help.

I used to think that 'Mini' bobbins were the correct fitment for the machine but I have since learned that Norton fitted a similar bobbin but of slimmer proportions. I have now remembered that I indeed purchased them from RGM. So maybe fitting them to the offending motorcycle will sort it?

I think it was the NOC…

I think it was the NOC Commando Notes that mentioned the Mini waisted bobbin as a cheap replacement and some suppliers followed by offering them, but you are right that using them can move the pipe out. Its a mixture of issues that can add up to the issue, not all on their own will cause it. I can't remember why I went looking for them but it was connected to some rearsets I was making.