Another question.  I've just slipped the gearbox innards out of the Navigator to lighten the load for when I remove the engine from the frame.  I am relieved that an initial inspection revealed no horrors, all seems well.

Looking at the sleeve gear I noticed that it has male "dogs" to engage the adjacent gear (MS 3rd?).  I have a spare crank case (Jubilee, 84946 R17).  This case had a sleeve gear in place but of a different design, slots for the adjacent gear to engage in rather than the dogs on the Navigator gear.  Otherwise, the gears appear to be identical.

The photo shows the difference, Jubilee on the left.

Can anyone explain the differences?

The sleeve gear with holes instead of male dogs is from the first Jubilee models.

The first Jubilee gearbox had no undercut on any gear dogs. The selector forks held the gears into mesh.

On launching the Navigator with 350cc engine the gearbox was strengthened and improved.

All gear dogs were undercut so that the gears held themselves together under load. Dogs were put on the sleeve gear. The clutch spline was increased in diameter. The clutch centre was given a 'washer' feature to locate the clutch against the end of the spline. Other clutch features, like the race plate, were redesigned.

The earliest design of gearbox and clutch was discontinued with launch of Navigator. Clutches are not interchangeable.

You can fit the earliest gearbox in any Navigator or Jubilee pre-1964. The crankcase details are the same. Norton/AMC thought the earliest Jubilee gearbox too weak for the Navigator.

Likewise they thought the Navigator gearbox too weak for the Electra.

So we end up with three different and non-interchangeable clutch centre arrangements on lightweights. Three sleeve gear designs. Different gear clusters ... in fact a nightmare for most restorers cruising round the autojumbles.

John, stick your Navigator gearbox in your Navigator. Some parts in the earliest Jubilee gearboxes are common with Navigator upgrade, so you do have spares like selector forks and cam.

Hi Peter, thanks for the explanation. I like to have a few spares so I now know what to look out for.

Hi John. Its vitaly important (while your gearbox ia apart) to check the condition of the laysfaft bush adjacent to the sleeve gear. Has it come out with your gearbox shafts? Can you remove it easily? Often, if you stick your pinky into it (selector shaft may need to come out first), it then comes out on its own.

The reason for asking you this, is that sometimes that bush has been known to spin in its housing. If it does, the results can be fatal, as the bronze bush will erode the aluminium its housed in.

1) Check that the oil way in the bush is in line with a straightened out paper clip - or bit of wire. If it is in line - you are in luck. It has not have moved in 60 years.

2) If at all possible, try & devise a method of locking it in place. The method adopted later in production was to peg it into place, with a bite cut out of the rim & and a locating peg placed alongside. With the engine out & dismantled, this will be an ideal opportunity to do this . see picture below: 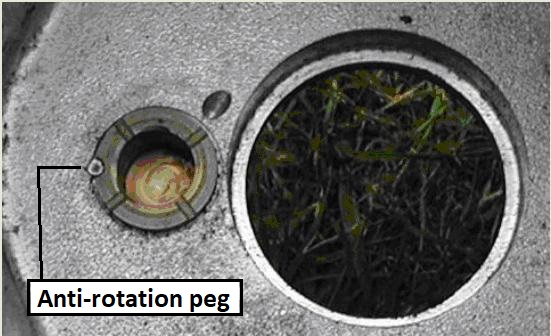 Thanks for the information Andy.  Will check as you say.

I have some ideas I would like to try with the gearbox, when I have my ideas sorted I will share.