I’m rebuilding my jubilee (early engine) following both the manual and Mike Marriott’s photo guide. In frame 5 of the guide it says to “prize cylinder head clamp plates (washers below) from heads”. I’m putting together a basket case and can’t identify any likely parts. While the parts list lists them, they don’t appear on the exploded diagram. Can anyone provide a photo or drawing of the clamping plates please? What function do they perform? I would be most grateful for any advice. Mike Formby

Hi Michael, from your description I think you are referring to the attached. I have a spare one in my garage if you are missing one.

been down to the garage, I think this is the item in question.

If you cant find this in your basket case (Know that feeing!), let me know and I'll pop this spare one in the post for you.

The cylinder head steady on a Jubilee is different to the Navigator and Electra.

You have a picture of the Nav/Electra item.

Attached picture of Jubilee item poached from our NOC Shop.

Front frame members are different too to suit the shorter Jubilee engine.

Mike and Peter, thanks for your help in identifying the part. Mike, thanks for the offer, there is no need to post anything as it appears the fitting on my frame has been dispensed with by a previous owner! (See photo). I hope my engine won’t vibrate to pieces as a result!

NOC Forums, the gift that keeps giving! Peter, thanks for that nugget of information, yes my pile of bits is supposedly Electra.(but includes a single Jubilee barrel....)

Michael, it is mildly worrying to me that you bike has been butchered like this. I guess, if like my project, its just a hobby bike for those few sunny weekends you should be OK, but if you hope to clock up regular miles, now might be a good time to overcome the issue and re-instate the steady somehow.

It seems from reading here and elsewhere, that all the Lightweights really need to have their necks wrung to get even a half-reasonable power output.

Now look here Mike, the Electra is not all that bad, it will suit you fine being a shorty!!. In fact a worthwhile change I did a long time ago was to up the gear a little, I think they come with the Navigator gearing which does seem a bit low, So I upped the final gearbox by one tooth. Made a modest difference. Before that one would shoot through a series of bends and change up-nothing we already was up!

Sorry for coming in late on this discussion.

I think the question is different to the answers here.

The head steady is not the part in question (I think). The Jubilee engine has two cylinders and two cylinder heads. Its basically two singles sat side-by-side.

To tie the "two engines" into one unit, two metal fishplates/brackets (P No 22452) are used on the centre 4 studs of the engine. The heads are machined for the thick washers, which are to be installed first, then the fishplates are placed over both pairs of adjoining studs and tightened down normally to 15 ft/lbs in the correct tightening sequence.

As a footnote, these parts do not appear in the 1964 parts list. Were they omitted as being not needed, or because they may have been fitted incorrectly at a service and caused issues (eg, if the thick washer below was omitted?)

Andy - do you have a picture…

Andy - do you have a picture of the “fishplates” at all please?  My Jub is a later one and I’ve not fitted these, as you say they’re not in the post 64 parts listing so wasn’t aware they were (possibly) part of it!

I have got two small plates that didn’t seem to fit anywhere in my box of left over parts - about 2” x 1” (from memory) with (5/16”?) hole at each end, does this sound like the part?  They may be from one of my earlier dismantled engines that came with the bike though so real query is are they fitted to later engine - can anyone with one confirm please?

No picture of the 'fishplate' head clamps but they are listed in this extract from the 1959 parts list as Andy indicated: 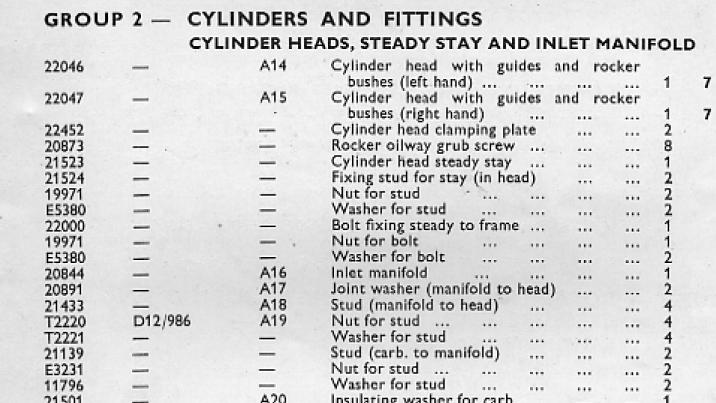 If I can get this to work, attached is a picture of the clamp plates that I think you are talking about

Thank you, Kev - that is the clamping plate concerned. I once recommended a friend fit these to his engine, but it caused issues. I suspect he omitted to fit the thick washers below, as they live in a machined recess on the head itself.

I'm also guessing that mechanics not 100% au fait with the Jubilee possibly made the same mistake back in the day - causing issues. Hence Norton ceased using this part in late '63, for the 1964 season - hence it no longer appears in the '64 Parts List.

The manufacturer by then was AMC at Plumstead, and maybe they thought the head steady itself provided enough rigidity to the motor?

Hi Michael, Mike - during discussion of this Topic, one disturbing picture showed up. That is of the front downtube of a Jubilee, where the mounting bracket for the head steady had sheared off. Also listed above are two photo of the head steady itself. The Jubilee one is as shown by Peter Holland, and it fits a closed loop bracket on the downtube - part of which is missing in the photo above. I do not have a good picture of it at present - can only show the two (Jub & Nav/Ele) downtubes side-by-side - so you can see the difference.

Also event is how the Jubilee bracket gets damaged - as there is no distance piece inside, to prevent crushing. 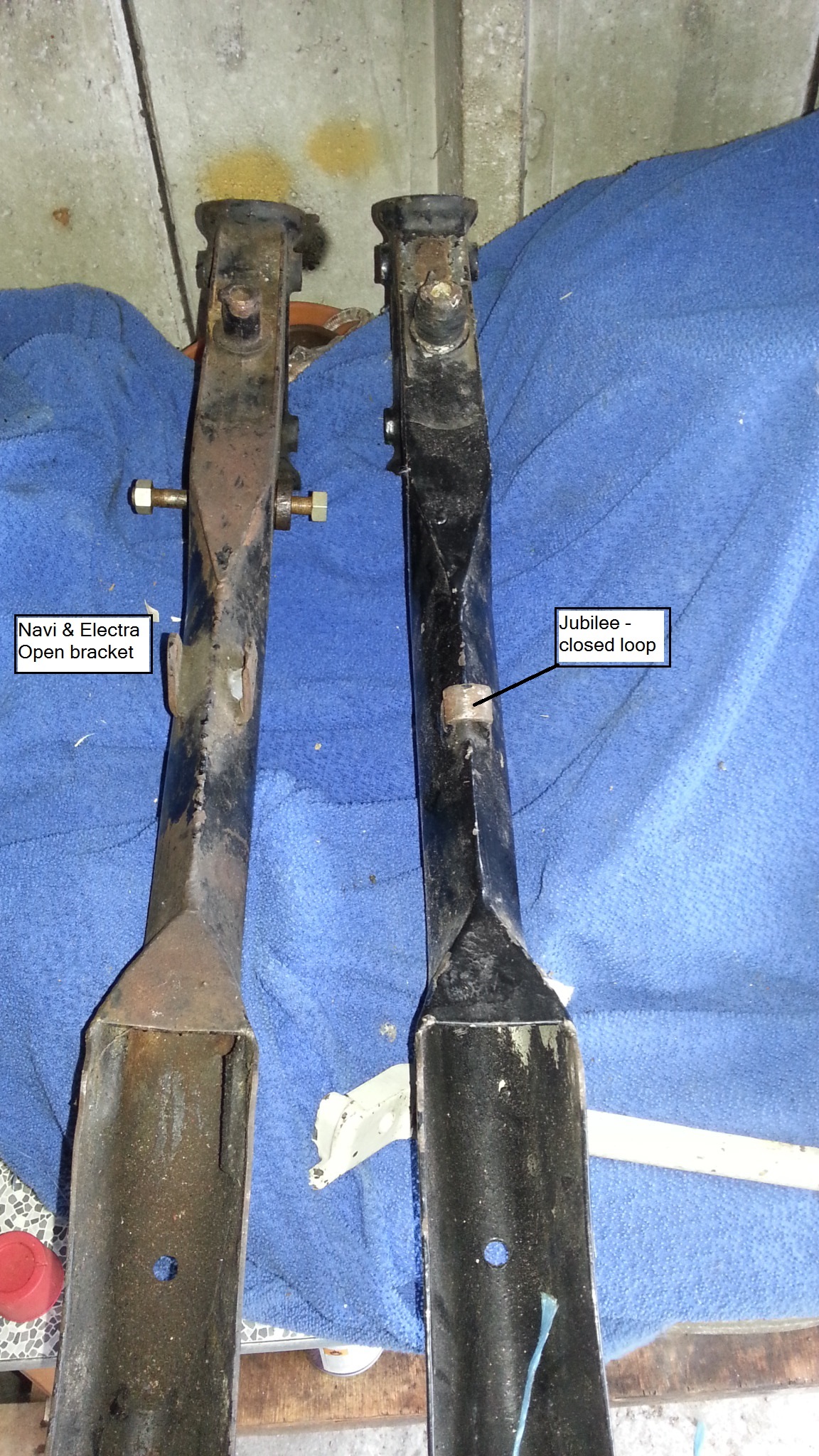 For us later Jubilee owners....

For owners of later Jubilees, my Jub is a 1963 model and has the Navi type head steady bracket as shown in Andy's photo. Does that mean I have the wrong downtube or were later models fitted with the Navi-type downtube?

The model and date of manufacture were verified by the NOC Records officer. 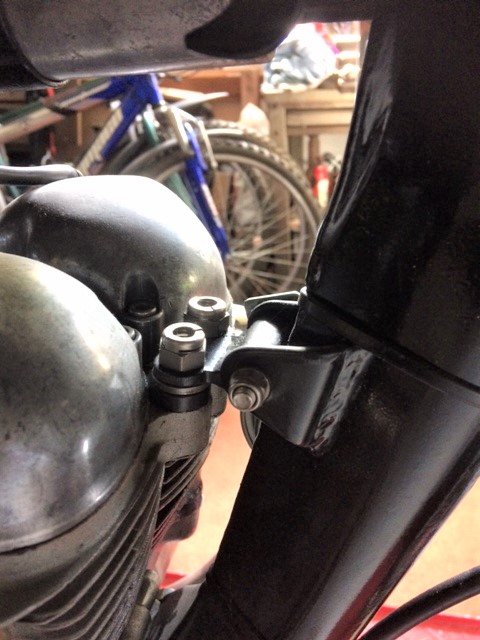 Back to clamping plates

I ran my Jubilee for some years without the washers underneath the clamping plates and it came to no harm. When I last put the engine back together I didn't think washers was the way to go, but I will fit washers this time. I think it will be beneficial to ensure somehow that the plates are screwed down perfectly horizontal which means perhaps slightly different thicknesses of washers. We will see!

Whoever put the Navigator front end on my Jubilee went to a lot of trouble with the steering bearings which are also somewhat different. Modifying a Navigator frame down tube to fit the 250cc heads would have been much easier, as the bearing cups and cones need putting on a lathe, resulting in broken tools trying to break through the hardened steel. I know, because eventually his bearings wore out. So for anyone thinking of upgrading to short Roadholders, make sure you use a modified Navigator front frame pressing.

I must say I didn't realise that so many people were 'doing the Lightweight'!

In case anyone needs clarification, I've attached pics of the 'early' Jubilee frame lug and the bracket that attaches the frame to the heads.

Dennis, I believe that is a genuine Navi downtube on your bike. In your photo' I see spacers between the head steady bracket and the cylinder heads, whilst on the Navi it would sit directly on them. The Jubilee bracket is welded on lower down to align with the shorter 250 engine, such that the same applies.

Given that the Navi setup is much stronger, I see the deviation as essentially harmless - but you would ideally fit longer (bespoke) studs such that the threads protrude though the nuts per best  engineering practice. In that context, you should also have washers directly under the nuts, where yours are alas being used as secondary spacers.

I concur with others that the stated difference in head angle (rake) is most likely down to wheel diameters and fork lengths, and not to the alignment of the headstock to the member which appears to be common to both models.

Oddly, there is a tidy black and white Navi on that well known auction site just now which is clearly fitted with a Jubilee front member, as the frame lug is set too low for the 350 engine. Hence no head steady, as it cannot be fitted.

The seller claims that the engine and frame numbers match, so that is odd indeed.

RK, thank you for your comments.

The 'Navi' front member on my Jubilee pre-dates my ownership so it is good to know that the alteration is 'harmless'.

Yes the studs are too short and I intend to replace them when I get around to it. There are in fact spring washers under the nuts as a temporary measure precisely because the studs do not go through the nuts making the locking part of the nut ineffective until I use longer studs.

I bought the bike as parts in boxes and had no idea if it was all there. Luckily, apart from missing tin ware, headlamp and one piston (!) most of it was there. However, when it came to some small parts such as the head steady it was guesswork as to what I had in the boxes.