Getting my  engine together from a mix of old, really old, and new parts is an ongoing struggle. The question of the week regards the lipped side plate of the rockers, #40 in the diagram. It would seem to me that the plates should contact the side of the rocker on the inside flat but the new plates that I have contact plate lip to rocker shoulder leaving a gap on the inside of about .010". Easy enough to machine the lip a bit but not sure how they should fit. 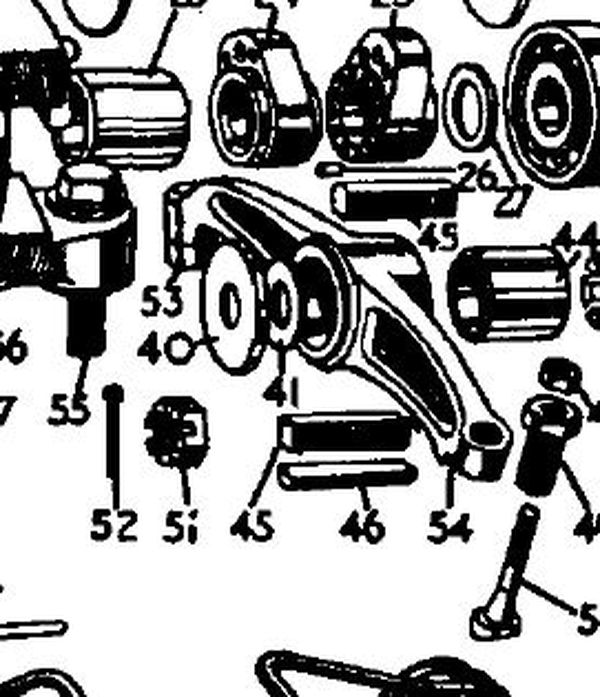 Let me phrase this in another way.....

How much side preload is there meant to be on the rockers when the cambox is assembled?

I don't yet have practical experience of resealing the cambox (but will need to do that soon) so can't offer much by way of advice but here are links to literature that might help:

2 guides that have been posted on the Simon Grigson/John de Kruif website vintagenorton.com

Also the Mitchell Barnes book which can be ordered from his website https://www.bluespark.com.au/2013/06/norton-international-long-stroke-manx-workshop-manual/

A couple of comments relating to your questions:

My understanding is that the rockers in a freshly built cambox should be very tight.

Should there be a cork washer sitting within the lipped washer? I'm not sure about that but there will be other more knowledgeable folk reading this - over to them?

.....but no one really gives specific guidance as to what "very tight" means. With new parts from different suppliers I'm finding the assembly fitting tight to extra very tight depending on which components used. This is why I ask about the cupped washer and whether it should fit flat-to-flat or lip-to-shoulder. (Cork fits outside of cupped washer.) Makes a difference of about .030" preload.

If cork is used, it will…

If cork is used, it will surely soon take a permanent set after which it won't stay tight and won't provide any friction (and precious little oil sealing ability either)?  Does anyone know where the rocker sides do rock?  Is it  the surface from the rocker to the flat washer, or flat washer to lipped washer, or on the sides of the cork?  It's pretty near impossible to inspect while moving, though it might be worth a try.

Sounds like a place for a modern X-ring seal, but the cork does also provide lateral restraint to the rockers - like the Thackery washers used in the Dommie rocker box- which a softer rubber item would not.  The oil leaking around those seals is totally lost, so even if the X-rings were to break up, they would not get into something inconvenient like the oil pump.  How long X-rings or O-rings would last is another matter.  It's not a very friendly place for an oil seal.

"The single knocker cam box, as used on all the ‘cammy’ models from 1931 to 1958, is a poor design, is prone to break, is difficult to work on and it leaks oil like a primary chain case! Why Norton persisted with it for over 25 years is anybody’s guess?"

I live next door to St Barnabas Church. My plan is to hide the cambox in the back of the church for a week or so and hope that it picks up some radiation. Maybe that will help.

The rocker side caps should have an internal gap to allow oil to lubricate the rocker bearing rollers. Although cork seems out-dated it is a good material for this particular application as it is slightly porous and the soaked in oil acts as it's own seal. You can cut your own corks seals from sheets, but you need to measure the thickness you need as it may vary. Assemble the box with-out the corks and measure the side movement. When you do the final assembly don't over-tighten the rocker pivot bolts as this will break up the corks. The reference to the rockers being tight is effected by the top and bottom seals which can be adjusted as required.

Your will be best to email Barry Stickland as he has probably built more SOHC Inter engines than any-one currently operating.

Your comment makes a lot of sense especially regarding oil to the rocker rollers. It does seem that a more direct route might have been beneficial.