On line - technical data of the Norton Manxman 650

Hello To all On the NOC Board  Now can you tell me if you are going to Included Online Technical data  of the   Nortons Manxman 650 and 650 standard and Delux models As well as the Norton Model 77 ridged from1950/51 500cc export models that has been purposely forgotten by this Club for an intended reason witch is beyond me,  this is still apart of Norton history,   and should not be written out of history, And I believe the NOC as some its data wrong on the dates of the production model 650 and 750  along with engine stamp numbers can we please work together and correct all this, As I have more accurate data then the club, as                       yours  Anna j Dixon

How do you know it's deliberate if you don't know the reason ?

To my mind, the aesthetic disaster of a red seat with a blue frame is reason enough to ignore it, but I'm sure that the NOC is above that !

Anna - so far I have over 110 documents to 'web-enable'. I have completed about 20 so far (I'll put them on the Club website in due course) thus it's going to take some time. A lot depends on what material we have access to and we also need to be aware of possible copyright issues in some cases. If you'd care to let me know what documents you have we'll see what can be done. Contact me directly via:

hello Dear Richard  In answer to your thread  In the world of manufacturing  Motorcycle Export motorcycle are the most important Assets to any Brand names and making them more colourfull and appealing to the customer is paramount  back then cars and other goods on sale were very bright and colourful, so why not the motorcycle  So black was out, along with silver the new colours were red and blue and bright greens and pinks oranges and yellows were all the INN crowd  like the flower people and rock and roll and Northern Soul,    So whether you like them or not is immaterial This motorcycle is a big part of Norton history and it made money  for the brand I believe export models are more important to Nortons history then Home models  Black and silver may be OK for you  but not OK for some of the guys over the Pond, And that's were the money is,     yours  Anna J

Green is where it's at !

If we take the military models in various greenish shades , the Forest Green Featherbed singles, BRG Commandos and some extremely greenish silvers, I reckon that it is a serious contender for top Norton colour. Personally, I've never owned a silver one but there are some colours that really don't go together unless separated by a white line. 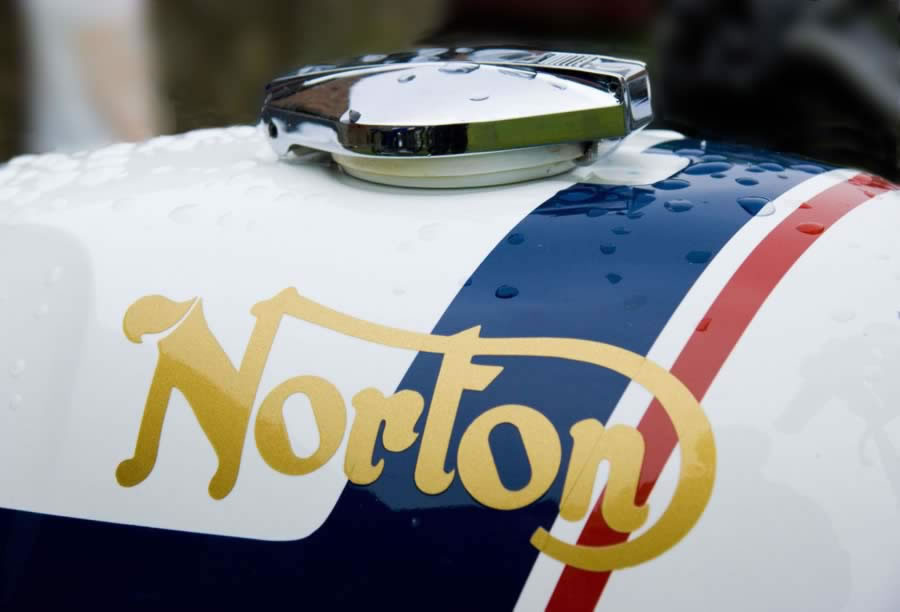 The US weren't impressed ...

... with the first version of the BSA/Triumph Triples when they exported the first Ogle-designed models with their space-age 'blingy' looks and they didn't sell in any numbers until the more traditional version was marketed. They resorted to sending 'beauty kits' over to the USA so that dealers could convert the existing Triumph T150 Tridents in stock into a more traditional looking bike. It dis-proved our conception of American tastes somewhat. The Manxman was marketed nearly a decade before the 'Flower-Power' era.

The paper trail for the exported 650s appears to suggest that the choice of the Manxman colours was down to a certain Mr Berliner. By the time the second export batch was on its way across the 'pond' feedback from the States had persuaded Bracebridge that Black frames and Black seats were probably going to pull in more sales.

In the first year of 650 production almost all of the bikes sent to Europe were far more traditional in styling with most of those heading for France and Italy having Black tanks, frames and seats. After around 400 had been built Silver Tanks, Black frames and Black seats appear frequently in the records.  Strangely, rear pillion footrests were an optional extra the whole year.

Those prospective US purchasers with a penchant for Green could, for a brief period,  purchase a Model 88 or Model ES2 in this colour if the Manxman Blue was not to their liking.

I am confused here. A-J D you suggest that  some models have been deliberately omitted from the on line data/records. Why do you make such an accusation? Then you tell the club that their records are flawed/incorrect,  and that you allege that you have the accurate data, followed by a request the "we" work together. This begs the question......Why don't you simply supply your superior information and data to the club so that the records can be produced accurately?

Sorry if I touch any nerves but I really do not understand this at all. Does anybody else?

Dived on the "Thistlegorm"…

Dived on the "Thistlegorm" off Sharm-El-Sheik in 2002 - saw the 16H's stacked on the back of lorries together with other bikes (Ariels and Matchless G3's I think). Well known and well remembered by the diving community anyway. It was actually bombed by the Luftwaffe , not torpedoed - too shallow for subs in this part of the Red Sea. Wreck lies at about 30 metres.